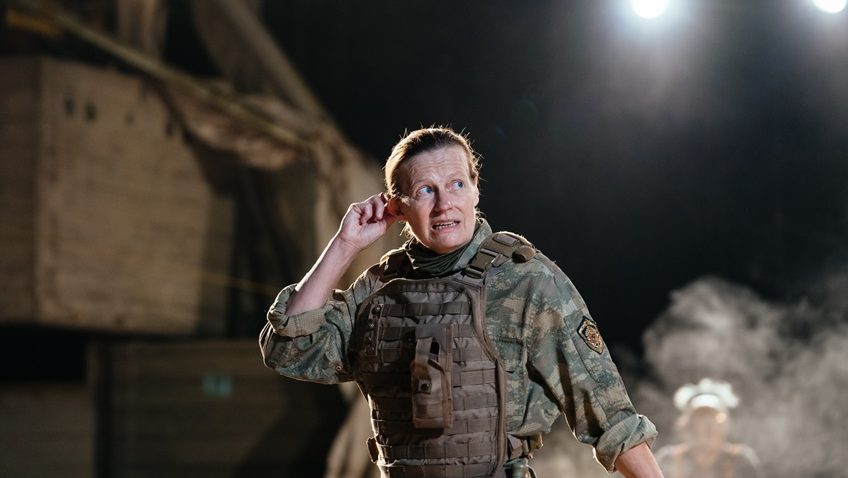 2,500 years on, Ian Rickson directs an all-female cast in Kae Tempest’s Paradise, a contemporary morality play, an adaptation of Philoctetes, the play Sophocles wrote during the Peloponnesian War and which won him First Prize at the Athens Festival in 409BCE.

The three leading actors are totally believable as military men; never did I feel I was watching women pretending to be men.

The story is set during the Trojan War. The Greeks, if they are to win the war, need Philoctetes, master archer, and his bow and poisoned arrows, which he inherited from Heracles.

Ten years previously, Philoctetes, then a celebrated war hero, was bitten by a serpent. The smell of the festering wound was so noxious the Greeks ostracized him and then abandoned him on the desert island of Lemnos where he has lived ever since, a crippled outcast in constant agony. Can he be persuaded / tricked / lured / bribed to return to the Greek fold and help them win the war?

Kae Tempest, in the same way the ancient Greek playwrights did, takes the legend and puts a new slant on it. In this version Odysseus is wounded in the leg by Philoctetes and whilst he writhes in agony on the ground, the clothes he is wearing are stolen by scavengers and Neoptolemus urinates all over him.

Lesley Sharp is a defiant and dead-common Philoctetes, the hoarse voice raging in anger and pain; yet the old warrior, swearing away can be gruffly, bluntly comic, often sounding like Alf Garnett as played by Warren Mitchell.

Anastasia Hille is a cynical Odysseus; no less hoarse, he pulls rank and orders Neoptolemus, son of the great Achilles, to lie. Gloria Obianyo is a very convincing boyish Neoptolemus, who hates being a liar and retains the moral high ground.