Home / SLIDER / A CORNISH HOLIDAY WITH A SURPRISING TWIST ! 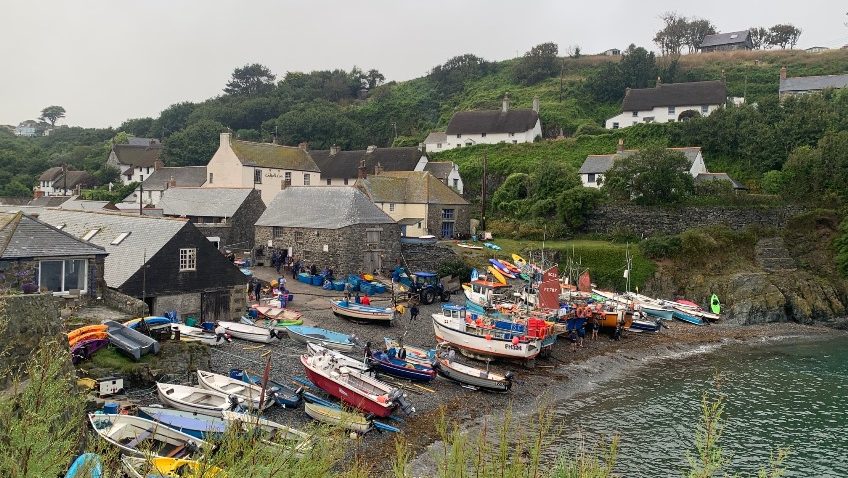 A CORNISH HOLIDAY WITH A SURPRISING TWIST !

It might seem strange but I am one travel writer who does not spend hours researching destinations in advance.

Of course, I have a general idea of the places I am going to visit but other than that I want all to be refreshing and new as far as that can be achieved.

So as only an occasional visitor to Cornwall I was certainly not prepared for what was to follow.

My wife Jenny’s family had hired a lovely centuries old farmhouse in a secluded setting above the small former pilchard fishing harbour of Porthallow, not far from Helston.

We’d spent the morning strolling down to the harbour for an alfresco fish and chips lunch outside the aptly named Five Pilchards Inn and were driving back following an afternoon on nearby Kennack Sands when this particularly memorable and most surprising incident occurred.

In to view came a cluster of satellite dishes which I realised must be the famous Goonhilly Downs satellite tracking station, a fact that was quickly confirmed by a quick Google search on my mobile phone.

“The surrounding area is also a nature reserve,” I read out, which prompted Jenny’s extremely bright three and a half year old granddaughter, Elvy, to ask what that was.

We explained that it was a special area for the protection of plants, insects, butterflies and small creatures such as lizards.

‘And camels?’ she asked.

‘No darling you only find camels in desert countries,’ Jenny replied.

We had absolutely no idea what had prompted the question because camels had never entered into our conversations and there had been no mention of camels in any of her story books.

Literally two minutes later and on rounding a sharp bend there were four or five camels standing behind a cattle grid at the end of a track We were all gobsmacked to say the least.

Had I done some prior research on the area, I would have discovered there was a camel centre close by and the shock of suddenly coming across these romantic “ships of the desert” would not have been so great.

‘Elvy whatever made you think of camels’, we asked?

‘I don’t know. It just came to me’ she replied.

As it is so often said, there is more in heaven and earth than we shall ever know.

The following morning, we again drove to Kennack Sands and arrived in the small grassy free car park just as a misty squall rolled in off the sea.

Donning waterproofs and with a picnic lunch we walked down to the beach. It was low tide and there were a cluster of hardy bathers hovering at the water’s edge. Further up the sand and huddled in deck chairs or behind windbreaks were a scattering of holidaymakers determined to make the best of it whatever the weather.

Passing them by, we headed off for a walk along the coast to the quite secluded Lankidden Cove.

This is accessed by a steep and narrow stony path and via a strategically placed guide rope but once down in the small sheltered and sandy beach exposed to the vastness of the ocean, the effort is well worth it.

Along the way the sun burst out and we picnicked in a sheltered grassy hollow high above the sea amid a host of heathers and other wild flowers while a lone kestrel hovered overhead.

Oh, what a contrast to our soggy start to the day and retracing our footsteps, while enjoying a succession of alternative views, we made it to the Kennack Sands beach cafe for ice creams in the nick of time before the shutters came down.

The following morning, we drove through the lanes to Helford and crossed the Fal estuary in a small water taxi to visit the magnificent Trebah sub-tropical gardens.

Meandering down through a narrow valley to the water’s edge, they are packed with exotic trees and shrubs, giant water loving gunnera plants and thousands of brightly coloured azaleas.

I boarded the floating pontoon serving the water taxi taking us back to Helford, some twenty minutes ahead of the rest of the family but by the time they appeared, the tide had come in another twenty metres so submerging the ramp connecting the pontoon to the beach and marooning me on the floating platform.

So, what was going to happen now I wondered waving to my family now stranded on the shore. But all was quickly remedied when the incoming taxi simply nosed and nudged the pontoon back until its ramp was back on the beach.

Drama over, we were ferried back across the estuary, stopping midway to deliver a party back to their yacht, and then enjoyed an alfresco pub supper overlooking the river at the conveniently situated Shipwrights Arms.

The following day was to be a beach day and we headed in convoy to Praa Sands stopping en-route to buy bodyboards for the three children.

As expected, all the car parks were already rammed by 11.30am and we were directed almost to the top of a steeply sloping hillside overflow parking area.

From that vantage point, I could see there were now literally hundreds of families on the sand amidst a whole clutter of brightly coloured parasols and windbreaks and I was not overly disappointed that this was a dog free beach and I had volunteered to take the family Labradoodle on a couple of hours walk along the South West Coast path.

Hound and I walked up and around the headland to a grassy spot overlooking a rocky and sandy beach, deserted because the steps had fallen away, or so a passing local walker told me.

We spent a pleasant couple of hours lazing on the grass idly watching sea kayakers out in the bay and nodding agreeably to the occasional long distant walker striding purposely by with heavy sacks on their backs and walking poles to hand.

Then it was time to stroll back and rendezvous at the cars for a short drive to bustling Porthleven, where a summer market was still in full swing. We picked up turbot and monkfish pre ordered from the local fish shop and enjoyed a pre- dinner harbourside drink before driving home for a barbecue.

The following morning, we shuttled cars to the nearby hamlet of Gillan and walked down to Flushing Cove to begin a stunning three and a quarter- miles walk back to Porthhallow, via Nare Point, the site of one of fifty- eight National Coast Watch stations around the UK manned by some 2,600 volunteers.

Following drinks at The Five Pilchards, we strolled back up the footpath through a small valley and woodlands beside a stream to our accommodation at Treglossick Farm.

We were out again in the late afternoon driving to the tiny picturesque Cadgwith Cove fishing village for a pub fish supper caught that morning. The delicious samphire had been harvested from a neighbouring cove, we were told.

A pay as you go beach barbecue for tourists and locals was also in full swing in front of a row of brightly painted fishing boats.

Shoals of holidaymakers and villagers were standing around drinking and chatting and soaking up the holiday atmosphere despite the light drizzle in the evening air.

The weather forecasters said the skies would clear over the Lizard Peninsular by one o’clock the following afternoon which was quite difficult to believe as we sat huddled on Church Cove beach near Helston with a misty rain in the air.

But sure enough, within half an hour the sun was out and everyone was in the water bodyboarding and having fun in the tumbling surf. A perfect finale to our Cornish summer break.