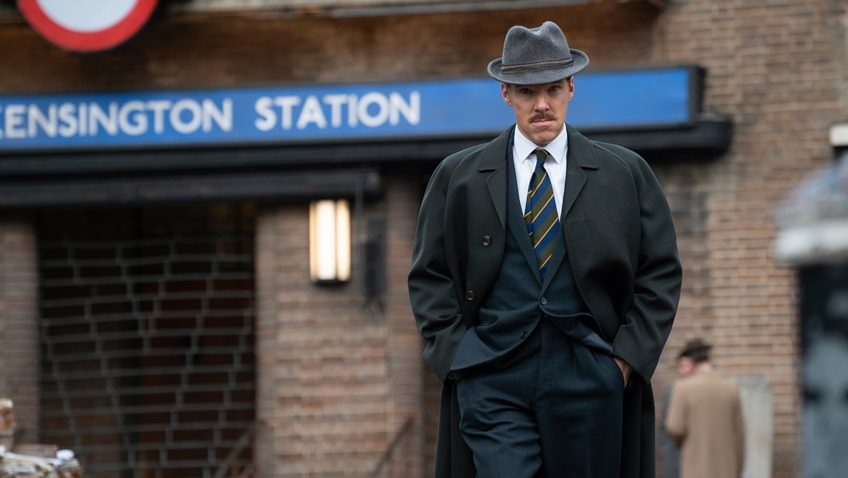 In one of the most enjoyable spy thrillers of all time, Alfred Hitchcock’s, 1938 The Lady Vanishes, Miss Froy, a septuagenarian music teacher goes missing on a train. The enemy not only counts on her being easily silenced, but on no one remembering she was ever there. On the first count at least, they are wrong. Bond notwithstanding, spies are normally chosen, not for how they stand out, but for how they blend in. At the height of the Cold War, the proverbial invisible older woman had a rival in British businessman Greville Wynne (Benedict Cumberbatch), although as a film, The Courier is no rival for The Lady Vanishes.

Perhaps because of the “it-could-have-been-you” appeal of Wynne’s story (which has twice been adapted for television) and the high-profile poisoning of Russian double agent Sergei Skripal in – of all places – Salisbury, the acclaimed theatre director Dominic Cooke has turned the story of Wynne’s collaboration with a Russian double agent into a feature film.

Oleg Valdimirovich Penkovsky (Merab Ninidze, BBC’s McMafia, Bridge of Spies) is a high ranking official at GRU (Soviet Military Intelligence) and, since 1955, has been working at the Committee on Scientific Research. And yet, when we first meet him, he is approaching two American students entering the US Embassy and asks them to deliver an envelope for him.

Penkovsky, who is about 50, became disillusioned with Joseph Stalin’s murderous rule and concerned about the Soviet Union’s increased nuclear powers under “we will not be crushed’ Khrushchev (Vladimir Chuprikov). It is a lonely, dangerous road ahead to follow his conscience.

Nonetheless, Penkovsky is shaken but not deterred when, in 1960, Major Pyotr Popov is paraded in front of Penkovsky and GRU colleagues and suddenly shot in the head. The stunned onlookers are reminded that he was a traitor to his country.

When CIA Agent Emily Donovan (Rachel Brosnahan – playing a composite character) arrives for a meeting with MI6, she tells them that she brings a gift. Penkovsky is more than a replacement Popov. But Donovan needs the help of MI6 because the CIA are thin on the ground in Moscow after the Popov disaster. Conveniently, as Penkovsky’s job is to scrutinise western scientific research he would not raise suspicions meeting with westerners in the same field. But who in the existing spy pool could mingle with Penkovsky without raising Soviet suspicions?

Enter Greville Wynne, an engineer who started a small business exporting industrial engineering products. His unique selling point is that he has made regular trips to Eastern Europe and, in the 1950s, few other salesmen had. This gave Wynne a perfect cover for the man described by his handlers as a middle-aged businessman who drinks a little too much and, though a Private in WWI, never saw combat.

The Courier is full of delightful scenes that play on our empathy with a man dropped in at the deep end. The first of these scenes is the recruitment lunch when a clueless Wynne realises what is being proposed and asked of him. It’s a few notches down the heavenly ladder from the Virgin Mary being approached for a more harrowing task, but director Dominic Cooke makes us aware that only part of Wynne’s acceptance is a patriotic wish to do the right thing. You also get the feeling that Wynne is gratified by the attention and intrigued by the challenge. He is, however, more concerned about the danger. ‘If the mission were the least bit dangerous, you’re the last man we’d send,’ he is reassured. Famous last words.

The other stand-out scenes involve Wynne’s homelife. On one of his previous business trips Wynne was unfaithful, and Sheila (Jessie Buckley, underutilised but great) grows increasingly suspicious of her husband’s secret trips abroad, about which he is naturally sworn to secrecy.

This time it is not a woman, who draws Wynne away from his conventional family life, but his friendship with Oleg Valdimirovich Penkovsky: the highest-ranking Soviet official to pass secrets to the UK and USA. The duo is credited with changing the course of the Cuban Missile Crisis and the Cold War. During Wynne’s first trip to Moscow the two go out on the town, and here Wynne’s propensity for booze is an advantage. ‘If you’re going to do business in Moscow,’ Penkovsky tells him, ‘I need to know you can hold your alcohol.’ Wynne replies, ‘It’s my one true gift.’

The scenes showing Penskovsky taking Greville under his wing and their growing friendship (they are both married with one child and share a common cause) are less thrilling than we might like. Montages of them going to restaurants, a jazz club, and to the Ballet (Swan Lake of course) are devoid of tension. The suspense increases when the KGB catch on to what’s going on with devastating results, but despite three solid lead performances, we are never at the edge of our seats.

Dominic Cooke is one of the UK’s foremost theatre directors, but on the evidence of On Chesil Beach and this, his second feature, he is not a natural film director. Cooke was not helped by Ian McEwan’s bizarre and misguided adaptation of his own novel for the screen, and here he is not helped by Tom O’Connor’s (The Hitman’s Bodyguard) uneven script that is oddly unmoving and unmemorable.

At the credits, we see a clip of the real Wynne being interviewed by the press and answering with humour when asked if will be travelling in Eastern Europe anytime soon. When he confirms that he is going back to his business, we are reminded in a way we not watching the popular Cumberbatch, that most of The Courier is true.

Yet what is omitted also gives us pause for thought. Wynne was saved from execution, but his return to a normal life was troubled. Sheila divorced him when he returned from his mission, and he suffered from alcoholism and depression until his death at age 70. Either to relive his glory days (he appeared on To Tell the Truth) or for the money, he wrote books about his three years as Penkovsky’s courier, in which he alleges he had been recruited long before Penkovsky. This, and other claims in his books, The Man from Moscow (1967) and The Man from Odessa (1981) have been discredited, but his character does appear remarkably seasoned in his subversive activities.