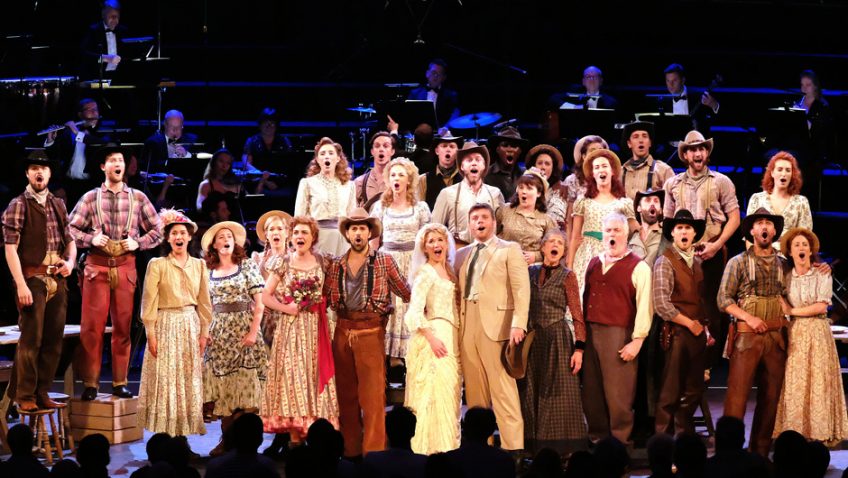 Oklahoma! (BBC iPlayer) was in 1943 a major turning point in the history of the American musical, famous for its wonderful songs and its brilliant choreography which dramatically furthered the story. It has not been seen since Trevor Nunn’s legendary production at the National Theatre nearly 20 years ago. The BBC Proms version, conducted by John Wilson at The Royal Albert Hall and semi-staged by Rachel Kavanaugh, will be of particular interest to Rodgers and Hammerstein aficionados because it is unabridged and notable for its unusually sympathetic portrayal of the misfit Jud Fry (David Seadon-Young) and his love for Laurey (Scarlett Strallen). Jud is treated badly in life and death. Alistair David’s choreography for Laurey’s dream/nightmare provides a powerful climax for Act 1. Nathaniel Hackmann’s Curly, an eloquent baritone, is a charmer, except when he is trying to persuade Jud to kill himself. Robert Fairchild’s Will Parker is an athletic dancer and Marcus Brigstocke’s pedlar is comic. The production deserves a longer run. It would be a sure-fire success for the London Coliseum’s summer semi-staged musical season.

The Hippopotamus (Network). Many people would surely, think that the ideal casting for the leading role in Stephen Fry’s satirical novel would be Fry himself but then he is in no way such a good actor as Roger Allam, who knows exactly how to deliver the flowery, cantankerous, rude dialogue and is perfect casting. He is playing a whisky-sodden failed poet and a failed theatre critic who visits his extended family in their country estate to investigate whether his sex-obsessed teenage nephew (Tommy Knight) has healing powers or not. The boy does not restrict himself to the laying on of hands. He goes much further. Matthew Modine and Fiona Shaw, miscast as his parents, don’t know what they are doing and Tom McInnerny as a screaming queen is doing far too much.