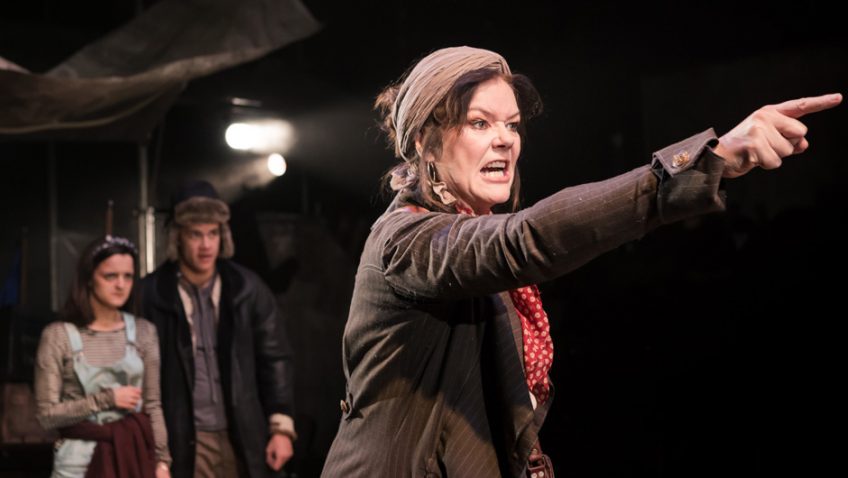 Three hours of Bertolt Brecht can be boring

Bertolt Brecht wrote his manifesto on warmongering and capitalism in 1938, shortly after the signing of the pact between Hitler’s Germany and Stalin’s USSR.

Mother Courage, camp-follower, small-trader, parasite, battlefield vulture, actively wants war. There’s no profit in peace. She is afraid of peace. War is her livelihood. She is a great survivor. Josie Lawrence and Phoebe Vigor in Mother Courage and Her Children

There never has been a British production to equal the original Berliner Ensemble production. The legendary Helene Weigel dragging a huge cart round and round the stage remains one of the 20th century theatre’s most unforgettable theatrical images.

Mother Courage’s most famous scene is when she haggles too long and fails to save her son from the firing squad; and then, in order to save her own life, she has to pretend the dead body is not her son.

The other memorable scene is when her daughter, Kattrin, a mute and in danger of being shot, climbs on to the roof and beats a drum to wake the sleeping town and warn them of the advancing army.

The scene is much diminished here by having Kattrin (Phoebe Vigor) climbing up a little step-ladder and bashing a broken tambourine.

A narrow traverse stage and a titchy cart can’t do justice to Brecht’s anti-war epic. It needs the sort of epic production which only the heavily subsidized National Theatre and RSC can afford these days.
.
Hannah Chissick directs. The translation is by Tony Kushner, author of Angels in America. The music is by Duke Special. I should have preferred Kurt Weill’s music. The only song which really works is the one sung just before the interval.