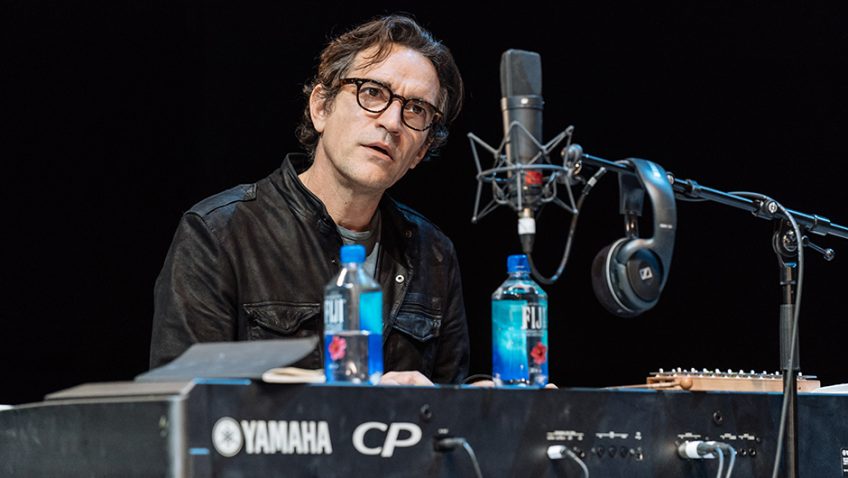 Joe Penhall, author of the multi-award-winning Blue/Orange, has written a satire on the music industry and asks how far the demands of money can push somebody over the edge.

A young female singer and a middle-aged male producer fight over who owns a hit song. It soon becomes clear that neither their lawyers nor their therapists know anything about the music industry and creativity.

The producer claims that if it were not for him the song would never have been the commercial hit it became and he wants to take the credit, the money and any awards that are going.

The Old Vic stage now has a thrust stage, jutting into the stalls, which means the audience is much nearer to the actors than usual.

Penhall has described his play as a fugue for voices.

Roger Michell’s fluid production constantly amazes with its constant overlapping. The actors have to be on their toes. The timing, vocally and physically, is everything. The barbed wit bounces back and forth.

Ben Chaplin is the producer and like so many men in show biz today, he abuses his power. He’s an egotistical bully, an arrogant, selfish and contemptible chauvinist. His Behaviour at an award ceremony is appalling. He has no empathy whatsoever. What he does have is all the best dialogue.

Seána Kerslake is the Dublin-born songwriter, who fights to be free of commercial control and do her own thing. Young and vulnerable, she was abused by the band’s crew during a tour of the US and remains traumatised.

Pip Carter and Kurt Egyiawan are the lawyers. Jemma Redgrave and Neil Stuke are the therapists.

The major appeal of Mood Music is the way it has been constructed, the clever way it has been directed, and the energy of the actors, rather than the actual play itself.