Home / LIFESTYLE / REVIEWS > / THEATRE REVIEWS / Who needs friends when you have readers? 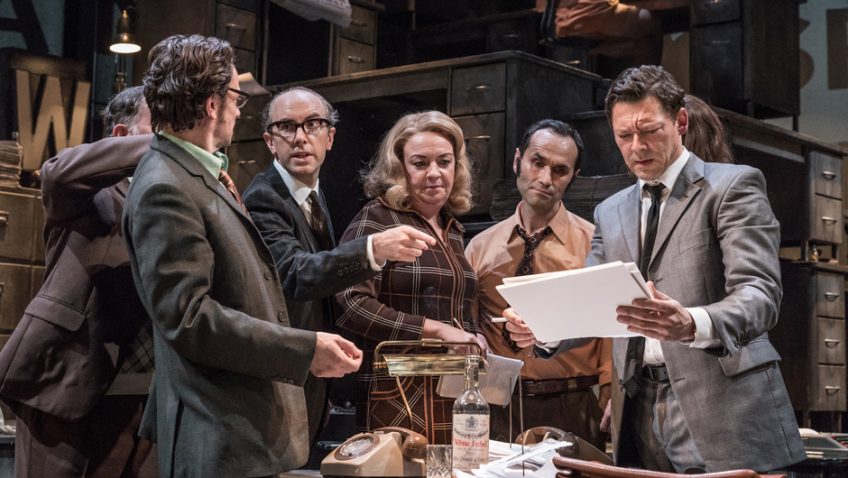 Who needs friends when you have readers?

Australian tycoon Richard Murdoch buys The Sun, a failing broadsheet, a laughing-stock, in 1969 and relaunches it as a new style popular newspaper, a people’s paper, pandering to the public’s basest tastes and instincts.

“I want to disrupt Fleet Street,” he says and declares a circulation war on The Mirror with its 5 million readers. Murdoch appoints Larry Lamb as his editor and tells him to get rid of the old and bring in the new.

What does the pubic want? People need stories. Give them what they want: scandal, all the dirt, and loud sensational headlines.

Who cares about media manipulation and fair and balanced news?

The Sun is the most influential newspaper in history. No one does fun like The Sun.

There have been plays about newspapers. Two stand out in particular: one American, The Front Page by Ben Hecht and Charles MacArthur, a big success on Broadway in 1929 and on film, and the other British, Pravda by David Hare and Howard Brenton in 1985

James Graham, who wrote This House, is in this bracket. He has the sharp political astuteness the subject needs and a fine ensemble to deliver a punchy performance.

The two leading roles are excellently cast. Bertie Carvel is Murdoch who is in the cut-throat business of revenge. Richard Coyle is Larry Lamb who creates an appetite he can no longer control. Of the two men Lamb emerges the potentially tragic one, his integrity gone.

Rupert Goold’s urgent and physically exciting production is hugely entertaining. The recruitment of staff is wittily staged. The movement has been cleverly choreographed by Lynne Page and the set, a messy mountain of desks and filing cabinets piled high, designed by Bunny Christie, provide the right chaotic ambience.