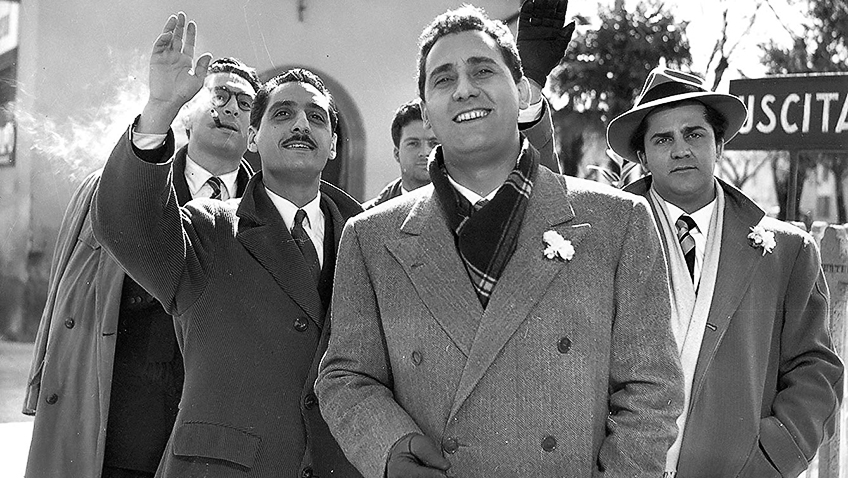 I Vitelloni, a major turning point in Federico Fellini’s career

I Vitelloni (Cult Films) won the Silver Lion at Venice in 1953 and launched Federico Fellini’s highly successful career. I Vitelloni (which translates as ‘overgrown calves’) does not feel like the Fellini we know so well from his later fantastic works. It offers a slice of Italian social neorealist life set in his birthplace, Rimini, a small seaside town, where he has said “life was inert, provincial, opaque, dull, without cultural stimulation. Every night was the same night.” The five main characters are friends, young middle class layabouts, who haven’t grown up and are still living off their family, idling away their lives, doing nothing and going nowhere. Fellini was the one who got away. The final memorable image is of a train leaving Rimini through the bedrooms of the friends he is leaving behind.

Funny Cow (Entertainment One) is the story of a stand-up comedian (Maxine Peake) who performed successfully in working men’s clubs in the 1970s when women were thought to be unfunny and unable to make men laugh. She had a brutal father, an alcoholic mother and two relationships: one with a man (Tony Pitts) who beat her, totally believable; the other with a librarian (Paddy Considine), intellectually and patronisingly her superior, totally unbelievable. Alun Armstrong plays a comic has-been. The film is a showcase for Maxine Peake. Adrian Shergold directs. Tony Pitts wrote the screenplay. The deleted scenes are well worth watching and should have been kept in.

The Guernsey Literary and Potato Peel Pie Society (StudioCanal) Will the quirky title drive people away or draw them in? The setting is Guernsey under German occupation during World War 2. There are three stories. The first is about a book club and is homage to the power of literature to bring people together and save them from oppression. The second story is about a woman who has an affair with a German soldier and a baby by him. The third story is about a writer (Lily James) having to chose between a very rich American (Glen Powell) and a pig farmer (Michiel Huisman). No prizes for guessing whom she chooses.

Le Crime De Monsieur Lange (StudioCanal) is an early (1936) work by Jean Renoir, famed for La Grande Illusion and La Regle du Jeu. and set in a publishing house where the workers are exploited financially and abused sexually by the owner. When he dies in a train crash the workers, led by Lange, form a co-operative and take over the business. Lange (played by a surprisingly lacklustre René Lefèvre) is meant to represent “the spirit of the Popular Front.” The film is dominated by Jules Berry’s flamboyantly theatrical performance as the publisher, crook, womaniser, a really nasty bit of work who uses people and then drops them. Renoir was drawn to the Communist Party and Jacques Prévert’s script is all for workers’ solidarity and the murder of capitalists.

Ghost Stories (Lionsgate). There is a lot of darkness and a lot of noise. The stories don’t add up to anything worth watching. A man, who has made it his mission to expose paranormal cheats, investigates three cases. The nastiest moment is when an autistic schoolboy is persuaded to enter a tunnel and disappears for good. Alex Lawther, who plays a troubled teenager, is easily the most interesting actor. But If you want to see a really good portmanteau of ghost stories, I would give this film a miss and watch the old Ealing classic, Dead of Night instead.