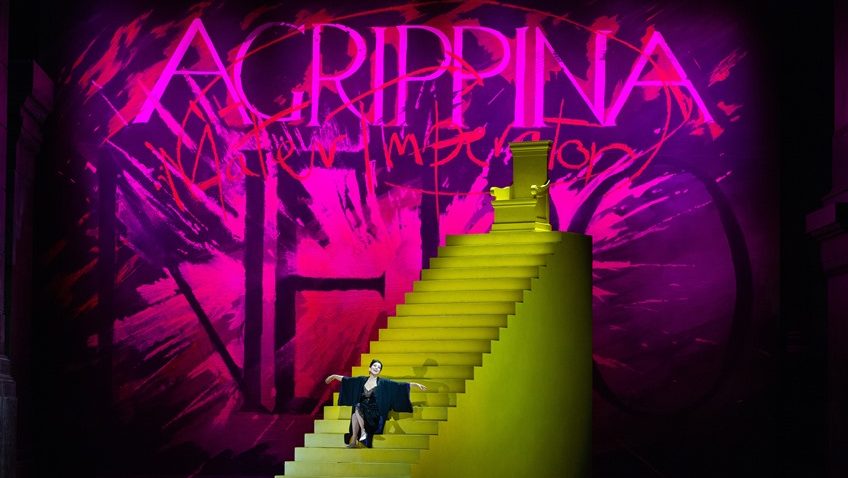 Handel was 24 years old when Agrippina premiered in Venice in 1710. The opera is a popular mixture of gorgeous music, political satire and bedroom farce; and it’s very, very funny.

David McVicar’s modern dress production, which was seen in London in 2007, arrived at the Metropolitan Opera in New York in February last year, just before all the theatres closed

The cast is discovered in a mausoleum in statuesque poses on tombs bearing their names. They step down off their pedestals to perform the opera.

It’s not just the singing, the virtuoso singing, it is the witty physicality of the singers. Nobody just stands and delivers. It is the sheer inventive variety of movement they all bring to their solos when the same sentiment is being repeated over and over again.

Agrippina wants Nero, her son, to become emperor so that she can be the power behind the throne. Joyce DiDonato’s performance is a classy act. Dressed all in black, tres chic, she is an elegant, ambitious, ruthless gorgon. I love the way she struts the stage.

Kate Lindsey’s body language as the hyperactive, coke-snorting brattish Nero, is amazing. Never for one moment did I think I was watching a woman in drag so convincing was her jerky male posture.

Brenda Rae’s vocal and comic skills are much in evidence as Poppea and especially when she gets drunk in a wine bar and turns cabaret artist. She has a gay entourage. All the non-singing, non-speaking roles are vividly characterised, however small.

Lestyn Davies’s grief-stricken Ottone emerges as the only really decent person in all the political intrigue, the only one you can take seriously.

Handel’s music is gorgeous. The singing is gorgeous. David McVicar’s production is so witty. I cannot recommend the Met’s Agrippina too highly. It is one of the great comic productions of the 21st century.

NB. Each day, a different encore presentation from the company’s Live in HD series is available for free streaming on the Met website, with each performance available for a period of 23 hours, from 7:30 p.m. EDT until 6:30 p.m. the following day. To find out more click here.