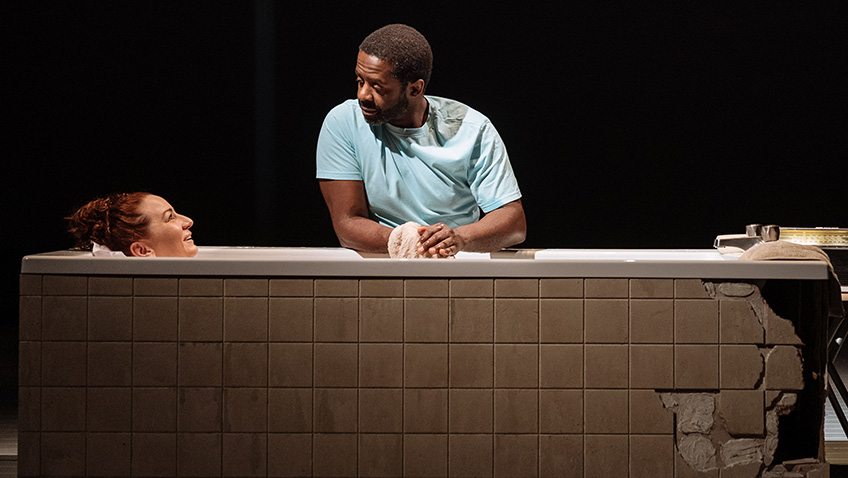 A wealthy PhD student (Jack Hunter), with cerebral palsy, is in a wheelchair. He hires a bright but poor working class graduate (Emily Barber) as his caregiver. She has had a number of jobs in bars. She is now out of work and needs the money. He is very arrogant and behaves in an unbelievably crass manner. 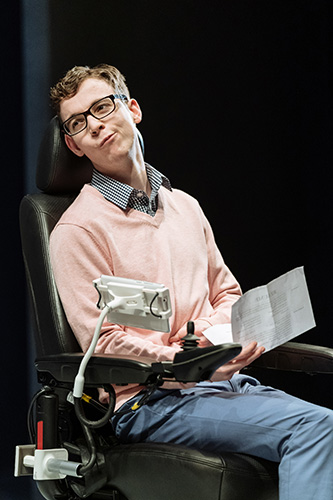 Jack Hunter in Cost of Living

An unemployed truck driver (Adrian Lester), who is separated from his wife (Katy Sullivan), returns to her when she is involved in a terrible car accident and loses both her legs. She also is in a wheelchair. She has a foul mouth.

The cost of living for these four people is very high; hence the play’s title. But who is caring for whom? The caregivers need as much care as the person they are meant to be caring for.

I am guessing Majok, who worked as a caregiver in Chicago, won the Pulitzer Prize not so much for the actual script but because of the play’s subject matter, disability, and because of her empathy for the marginalised in society.

The Cost of Living is also about loneliness, poverty and the cost of healthcare in America.

The play begins with an extended monologue, an outburst of grief by the truck driver, who attempts to hide his grief beneath bonhomie banter. Adrian Lester’s delivery of the monologue is masterly.

American actress Katy Sullivan, who created the role of the wife and won awards for her fierce performance in New York, is a double amputee, a four time US champion in the 300m, who competed in the London 2012 Paralympic Games.

It was Carson McCullers, the American novelist, who said the closest thing to being cared for is to care for someone else.