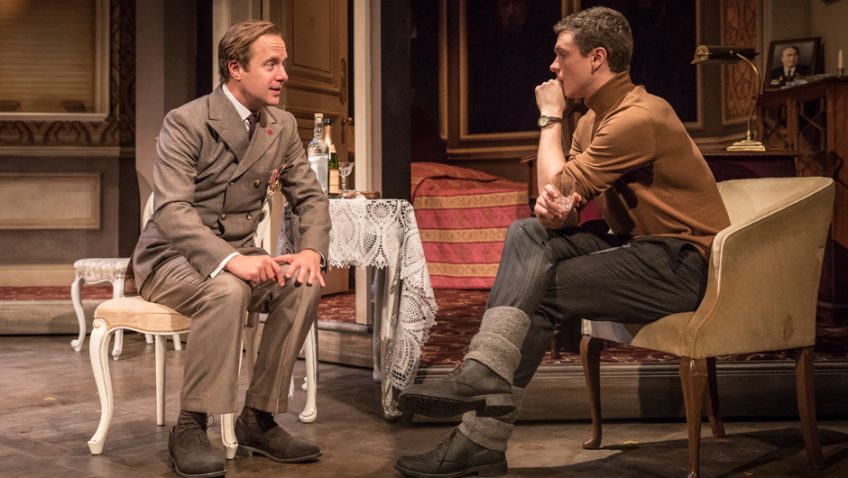 The casting of Rick Mayall and Stephen Fry in Simon Gray’s Cell Mates in 1995 must have seemed a box-office dream-ticket.

But when I turned up to see it I learned Fry was ill and his understudy was on. I decided to wait until he came back. A few days later the newspapers were full of stories of Fry having disappeared and nobody knowing where he was. There were rumours he had been sighted in Bruges. Fry wrote a letter to The Independent to say he was not cut out for the theatre.

The debacle meant that Cell Mates failed at the box office and closed very early. Ed Hall’s enjoyable, nicely acted production is its first revival since then.

The play is a spy drama of friendship, betrayal and treachery in the John Le Carre mould. Gray is, however, much nearer to Alan Bennett who wrote about Guy Burgess and Anthony Blunt in his double-bill, Single Spies.

44-year-old spy and traitor George Blake, who worked as a double agent for the Soviet Union, was sentenced to imprisonment for 41 years.

In 1966 he was sprung from Wormwood Scrubs by 32-year-old Sean Bourke, and Irish petty criminal, who got him to Moscow.

Blake insisted that Bourke join him and Bourke then found he was not allowed to return to Ireland. But it was not the KGB who was keeping him. It was Blake who didn’t want him to go home.

Blake’s treachery, after all Bourke had done for him, hurt. But, as Blake, explains, he is a professional: “Spies betray people. That’s what spies do. Even when it’s not strictly necessary. Spies can’t break the habit.”

The two men are interdependent on each other; but that Blake needs Bourke more than Bourke needs Blake is abundantly clear when Blake confesses, “I need you as a man needs a wife.” The homosexual sub-text, however, is, oddly, kept firmly under wraps.

Bourke, homesick, wants to go home. (Gray was going to call the play Homesick.) Blake is a communist and his home, morally, spiritually, politically, is Moscow.

Blake comes across in Geoffrey Streatfeild’s performance as a much weaker character than the cruel double agent he was in real life, betraying 40 agents. Emmet Byrne’s Bourke is a much more affectionate, sympathetic and likeable person.

George Blake is still alive, aged 95 and living in Moscow. Sean Bourke died in poverty in Kilkee in 1982, aged 48.

Simon Gray (1936-2008) playwright and professional smoker, is the author of Butley, The Common Pursuit, Otherwise Engaged and Quartermaine’s Terms, all of which have had revivals.

Perhaps a fringe theatre might be brave and revive another of Gray’s plays which flopped at the box-office, The Rear Column?