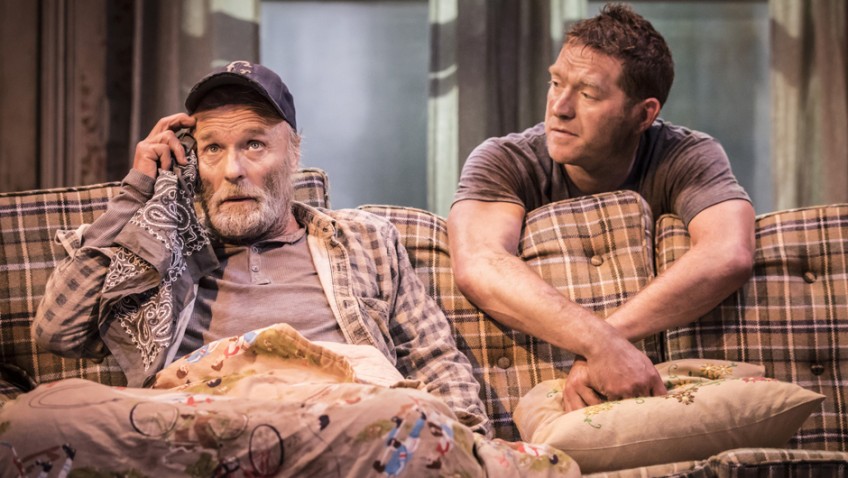 Sam Shepard writes about dysfunctional America families. He holds up a mirror to rural America and finds the American Dream is a myth. The nation is divided, demoralised and disenfranchised.

Buried Child, a Gothic horror story of incest and murder, more surreal than real, premiered in 1978 when it won the Pulitzer Prize for best play. It still took another 17 years for it to reach Broadway in an excellent revival by Chicago’s Steppenwolf Theatre Company, directed by Gary Sinese. This was amazingly the first time a Shepard play had appeared on Broadway.

I thought it was a modern masterpiece. The production, the acting and the design (with its steep, spooky Psycho staircase) were all so good that I hoped the National Theatre would invite Steppenwolf to re-stage it

Ed Harris, the distinguished American Hollywood actor, for whom Shepard created Fool for Love, is making his West End debut with his wife, Amy Madigan, in a production by Scott Elliott, which opened in New York earlier in the year.

The script feels like a marriage between Harold Pinter’s The Homecoming and Eugene O’Neill’s Desire Under the Elms.

A young man (Jeremy Irvine, making his West End debut) returns to his rural home after a long absence, accompanied by his girl friend (Charlotte Hope). The family, a pretty weird lot, fail to recognize him.

His simple-minded dad (Barnaby Kay) is given to bringing in armfuls of corn and carrots, which he says are growing in the barren backyard.

His alcoholic, grizzled baseball-capped grandpa (Ed Harris) is sick and only too aware that he comes from a long line of corpses and soon will be one of them.

His babbling grandma (Amy Madigan) is having an affair with the local pastor. His uncle (Gary Shelford) is a bloated retard who cut off his leg with a chainsaw.
.
Buried Child is as strange as it always was but it is no longer as spooky and as thrilling and certainly not as hilarious as I remember it in the Gary Sinese production.