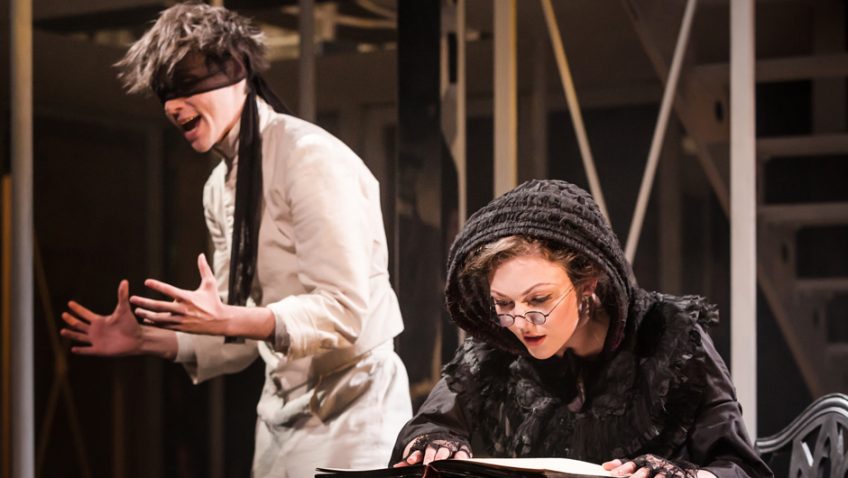 Louis Braille (1809-1852), a devout Catholic and an accomplished cellist and organist, invented his tactile system of communication – a six dot alphabet cell – in 1824 whilst he was still a student and only 15 years old.

He had been blind since he was 3. Jack Wolfe in The Braille Legacy

The government thought his invention was a waste of time and that blind youths would be better off learning a trade rather than learning to read.

Braille was not accepted until long after his death.

He died two days after his 43rd birthday and was buried in his hometown, Coupvray.

He was re-buried in the Pantheon in Paris on the 100th anniversary of his death. As a symbolic gesture the bones of his hands remained in a concrete box in the Coupvray empty tomb.

Sebastien Lancrenon and Jean-Baptiste Saudray have written a musical tribute; but the pastiche music and the lyrics (translated by Ranjit Bolt) never feel right for the subject matter.

What Louis Braille needs is probably something along the imaginative lines of those documentaries Ken Russell did on Elgar, Debussy, Delius and many other composers for television in the 1960’s.

Artistic director Thom Southerland, who has done some brilliant musical productions on tiny stages – Ragtime, Titanic, Grand Hotel, Mack & Mabel and Parade – tries hard to make it work and cover up the weaknesses of the clunky book with a lot of unnecessary movement and an upstairs/ downstairs cube

structure which fills the stage and rotates quite meaninglessly.

The most dramatic moment is a speech from a philistine government official refusing to support the 6 dot alphabet.