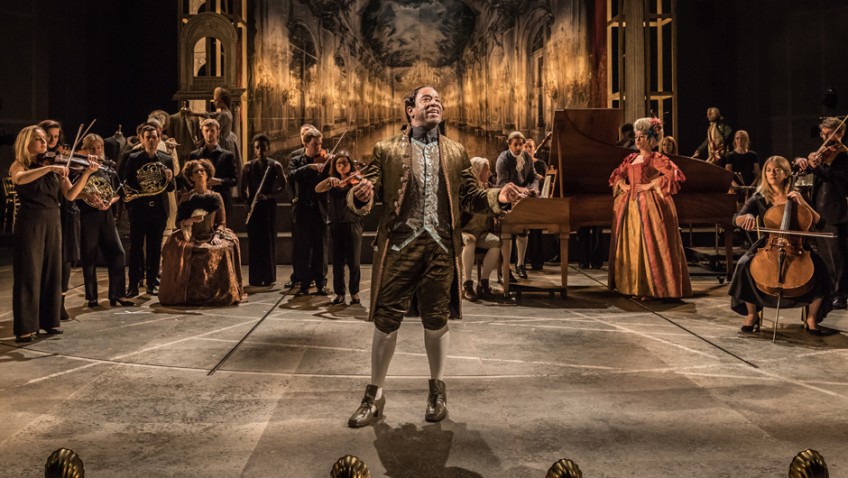 Peter Shaffer died earlier in the year, aged 90. Michael Longhurst’s highly original revival of his masterpiece is timely and is clearly going to be a great popular success. Amadeus is based on the legend that Antonio Salieri, composer to the court of Emperor Joseph II of Austria, had murdered Mozart.

The legend was created by Salieri himself on his death-bed in 1825 and the story was retold by Pushkin in 1830 and set to music by Rimsky-Korsakov in 1898.

Salieri, who has lived so virtuously, so chastely and worked so hard in God’s service, is deeply jealous that God should have chosen to speak through “the voice of an obscene child” rather than through him.

The only way to get his revenge would be to kill His creature, to destroy Mozart’s career at Court and reduce him to destitution and starvation; and this is exactly what he did.

The great strength of the role is that Salieri is always totally aware of his own mediocrity. “I am,” he said, “the patron saint of mediocrity.” After Mozart’s death, he went on to even greater fame, but he knew his work was absolutely worthless.

Salieri died aged 74, having lived long enough to see Mozart’s operas universally admired and his own operas (some 40) totally extinct.

There was one way to ensure he would not be forgotten and that was by confessing he had murdered Mozart. Nobody believed the ramblings of an old man, but, of course, in one sense, he had “murdered” Mozart.

Salieri, a great role, was created by Paul Scofield at the National Theatre in 1979. The play lasts a good three hours and he has a lot to say. Scofield said he found King Lear less taxing to act.  Lucian Msamati grows into the role. Longhurst’s production is notable for placing the emphasis firmly on Mozart’s music.

Six singers and the Southbank Sinfonia share the stage with the actors and the musicians are expected to act and contribute physically as well as musically to the drama.

There is a great moment when Salieri is reading Mozart’s score and is overwhelmed by the sublime sound which we, the audience, can actually hear and which leads Salieri to declare war on God.

Mozart is presented as a precocious, immature, conceited, unbelievably vulgar, physically unappealing genius, who always says what he thinks. “Have you heard Salieri’s music?” he inquires. “It’s the sound of somebody who can’t get it up?”

Shaffer takes his inspiration from Mozart’s notoriously crude correspondence to his family.

The falsetto giggling, as affected by Simon Callow and Tom Hulce, when they played Mozart on the National’s stage and on film respectively, has been toned down.  Adam Gillen, gaped-mouthed, has all the unabashed and irritating bravura the role needs and more.

Peter Shaffer wrote a second masterpiece: the one-act farce, Black Comedy, which is one of the funniest farces ever written. Hopefully, somebody will give it a major production soon.