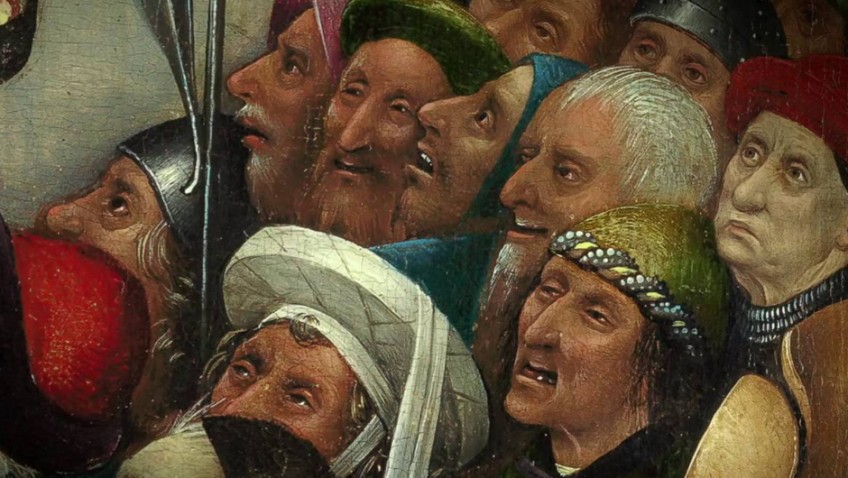 The Curious World of Hieronymus Bosch awaits you on 3rd November

Between 16 February and 8 May of this year, nearly half-a-million people descended on the Het Noordbrabant Museum in Hieronymus Bosch’s home town,’s-Hertogenbosch (Netherlands), to commemorate the 500th anniversary of his death.  The exhibit that put the museum on the map was not, however, a given, but an experiment born by necessity.  As the museum’s Director, Dr Charles de Mooij, tells us in the latest Exhibition on Screen film event, The Curious World of Hieronymus Bosch, the town owns no drawings or paintings by its famous native son. More daunting still, Bosch’s extant output is almost as limited as Vermeer’s. Bosch’s triptychs were broken up and, those that still exist, are now displayed in various major museums around the globe. The museums are naturally not keen to lend what are among their most popular attractions.

Not to be defeated, Dr Mooij decided that since the town had nothing to trade, he would offer knowledge and offered research and restoration in exchange for the short loan.  Several years in the planning, the exhibit has won the praise of The Times art critic, Rachel Campbell-Johnson who considers the result,  ‘one of the best exhibits I’ve ever seen in my life,’ – and not only because 17 out of 24 known paintings and 19 out of 20 drawings were united in ‘s Hertogenbosch for the first time in history.

Hieronymus Bosch was born Joen Van Aken in around 1450, and, like the rest of his family, was always going to be an artist.  He changed his name by combining the Latin for Joen- Jheronimus – with the shortened name of his home town, Bosch. Bosch is the man associated with a wild, cruel and sadistic, but playful imagination; the man who fills his works with demons, devils, mangled, tortured and drunken humans on their way to heaven or, more often, hell.  As Art Historian Dr Jennifer Sliwka comments in the film, ‘he is remembered for all the detail, but not the subject.’

Yet Bosch’s subject was all important to him, as he believed that his art could persuade people to live a virtuous life.  Professor Jos Koldeweij, co-curator of the exhibit, explains that one reason Bosch created such a busy canvas with so much to look upon with wonder, horror, fear and humour, was because the longer you look, the longer you are thinking about the subject of the painting.  He wanted the message to sink in and the way to do this was to dazzle with his virtuosity.

Viewers will be surprised at the level of piety in the works, albeit so imaginatively and uniquely expressed that they may seem far removed from traditional religious paintings.  Bosch was a member of the Brotherhood of Our Illustrious Lady which existed to perpetuate the cult of the Virgin. In the film, we are taken to the Chapel in the Cathedral of ‘s-Hertogenbosch where Bosch worshipped and in which he decorated an alter panel.

One of the best illustrations of Bosch’s purpose in painting, and his unique position in 15th century art, is the Haywain Triptych (from the Prado, 1500-1502).  On the left are Adam and Eve being expelled by an Angel from Eden, and in the centre is a giant bale of hay with dozens of frantic people grabbing at it, while greedy nuns and a lazy, drunk monk are taking a rest after taking their turn.  Various dignitaries, and wealthy squires some on horses, watch from the sidelines.

Bosch might have been illustrating a 15th century poem, which, paraphrased, tells us that the Lord gave us sufficient hay to share, but instead, people are fighting for it out of greed.  In choosing this unusual subject, which is neither from the lives of Saints nor expressing the sayings of Christ, Bosch has created his own metaphor.  Professor Koldeweij believes Bosch is the first and only person in his time to use the moralistic metaphor as a subject of his art.   Given the departure from the recognised Christian iconography, the triptych was not intended for a Church, but probably for a wealthy merchant or nobleman.

In Death and the Miser (from the National Gallery of Art, Washington D.C.) Bosch encourages us to think about the evil in the world.  Death, in the form of a scary skeleton, enters a room in which a man suddenly sits up is in his deathbed to take note of his fate. Below the bed a demon offers him a bag of gold while above an angel is drawing the man’s attention to an image of Christ in the small window above.   A ray of light, emanating from the window through Christ on the cross does not quite reach the man, while the devil watches the spectacle from above the bed’s canopy. There is a wonderful, dramatic tension in the air as the viewer is left to wonder:  will he go to heaven with the angel or to hell with the devil?  Anyone who has seen Bosch’s images of hell will probably be swayed to remain on the straight and narrow.

We are told that Bosch’s influence is especially strong in Spain as Phillip II (mid 16th century) was an admirer and collected his work. In fact, such was Bosch’s popularity in Spain that he has become part of their culture.  Bosch’s most famous and curious work, The Garden of Earthly Delights, is, not surprisingly, in the Prado where it remained for the exhibit as it does not travel.  But director David Bickerstaff did travel, and we get to see this masterpiece as well.

Today it is hard to imagine Goya, Ensor, Dali and all the Surrealists, or indeed the Chapman Brothers to name but a few artists and movements without Bosch.  He was an artist who combined a medieval outlook with a Renaissance form of expression and is credited as serving as a link between the two worlds.

If you were not among the faithful and the fortunate to have attended the exhibit in the flesh, don’t despair.  Exhibition on Screen’s The Curious World of Hieronymus Bosch, being shown at selected cinemas on 3rd November (and in some cinemas, on additional dates) will guarantee you an unobstructed view and a scholarly guided tour. Go to www.exhibitiononscreen.com for further information.