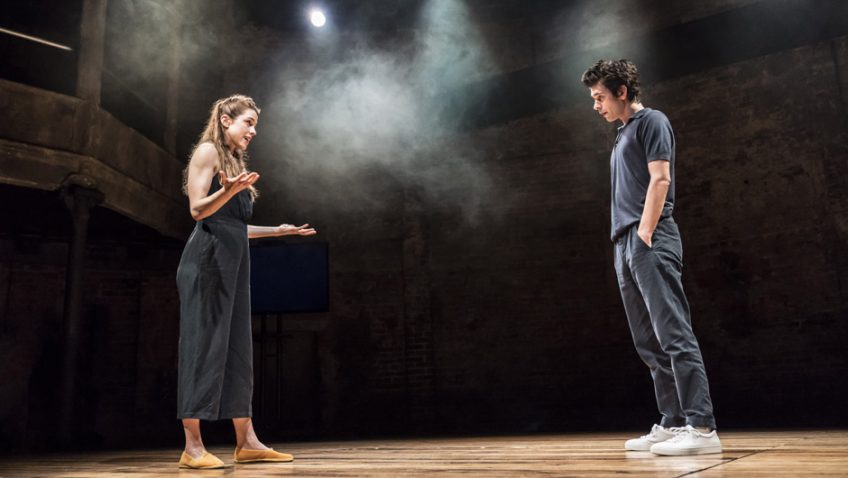 Ben Whishaw is in a new play by Christopher Shinn

American playwright Christopher Shinn’s sprawling play is about violence in its many forms.

Luke, an aerospace billionaire, gets a personal message from God to “Go where there’s violence” and he acts on it. Fortunately, Luke is played by Ben Whishaw, which is a very definite plus.

Ben Whishaw and Emma D’Arcy in Against

He goes to a prison and meets the father of a boy who has been abused and he goes to a packing factory where the workers are exploited. Capitalism is a form of violence.

Luke wants to change the way people think. He’s a good listener and listens to what anybody, tycoons, drop-outs, drug-addicts, have to say. Soon he becomes a celebrity and has a following. The more Christ-like figure be becomes the bigger the cult. It is not difficult to guess how the play will end.

Meanwhile, Luke, hands-on, is trying to keep his sexual feelings under control; much to the distress of his girlfriend. Overwhelmed by his mission he goes home to his scatty mum for a break.

There is some amusing satire at the expense of academia when a professor (Kevin Harvey, very funny) offers a student, who is on a creative writing course, his criticism of the novel she is writing; but there is no need to repeat the joke and their second scene together could be cut.

PS. If you missed Ben Whishaw’s subtle and brilliant performance in Mark Gatiss’s The Man on the Platform on television, catch up with it pronto on BBC iPlayer.