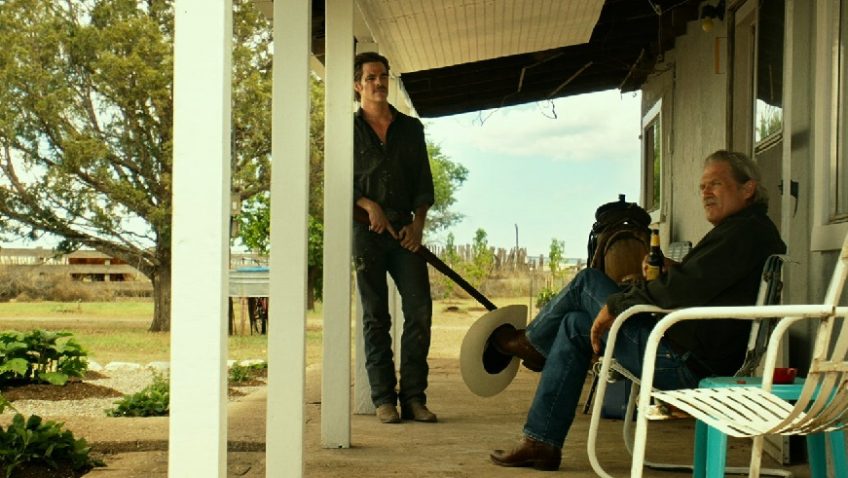 HELL OR HIGH WATER (StudioCanal). David Mackenzie directs a powerful and superior modern heist Western which is also a social commentary on a cycle of poverty in which the banks are the villains, ruthlessly robbing the poor of their homes and livelihood.  The elegiac score and the Texan landscapes set the mood. The script is good. The characterisation is strong.  Two brothers rob banks to raise the money they need to keep the farmland (which, incidentally, their ancestors stole from the Comanche).  Jeff Bridges, excellent, is the ranger, about to retire, who is determined to bring the brothers to justice. Ben Foster is the elder brother, a wild card. Chris Pine is a revelation as the essentially decent younger man.

THE WITNESS FOR THE PROSECUTION (BBC). Heiress (Kim Cattrall) is murdered by her young lover (Billy Howle). Can the solicitor (Toby Jones), convinced of his innocence, save him or will a jealous chorus girl (Andrea Riseborough) ensures he goes to the gallows? Agatha Christie’s strength is her plots; her weakness is characterisation. The film and TV series have always had to rely on the personalities of big all-star casts. Sara Phelps has ignored Christie’s stage version and the 1957 Billy Wilder film version and gone back to the original 1925 short story. Her adapation has so much depth and darkness that it doesn’t feel like Agatha Christie at all. The characters are traumatised by World War 1 and the wrong person is hanged.

AFTER LOVE (Artificial Eye). Joachim Latosse directs a painfully convincing Belgian domestic drama: a divorcing couple, married 15 years, continue to live together because they cannot afford to live apart. They have two children, twin girls. They quarrel all the time. They disagree on how to split the money when they finally sell their home. There is a dinner party where, to the excruciating embarrassment of their friends, they both behave badly. The performances of Cedric Kahn and Berenice Bojo could hardly be more realistic, so natural is their acting. Latosse is impartial. I suspect audiences will side with the husband or the wife, according to their sex.

THE BIRTH OF A NATION (20th Century Fox). Nate Parker produces, directs, writes the screenplay, appropriates one of the most famous film titles of all time, and plays the lead. It is perhaps surprising that nobody has filmed the life of Nat Turner and his 1831 rebellion before. Turner was an enslaved Baptist preacher on a Virginia plantation. He was used by the whites to preach to the slaves on obedience to their masters regardless of their Behaviour to them. The potential box-office success of the film has been put in serious jeopardy by dragging up an 18-year-old scandal involving Parker when he was at university.

JULIETA (Pathe). A fisherman dies in a storm at sea. His daughter blames her mother and his mistress. Pedro Almodovar’s film, and it is one of his best, is about death, guilt, grief and the estrangement of parents and children. The role of Julieta is played by two actresses: Emma Suirez as the older and Adriana Ugarte as the younger, but so seamlessly that you think it is one person The actual moment of transition from young to old is brilliantly achieved. Almodovar is at his most serious and least camp. There is no melodrama. There is nothing bawdy and outlandish. The film is subtle and moving.