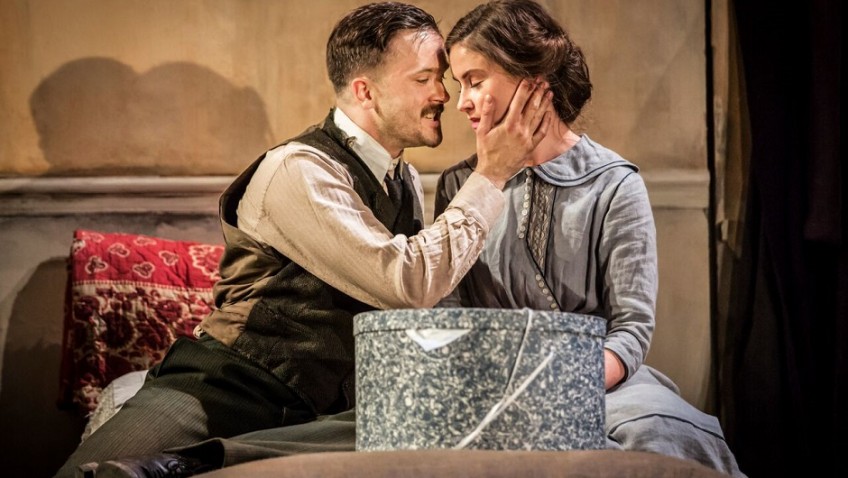 THE PLOUGH AND THE STARS, Sean O’Casey’s masterpiece, is a slice of Dublin tenement life during the Troubles and leading up to the Easter Uprising in 1916.

More people were dying of consumption in the filth, squalor and poverty of the slums than were dying in the wars at home and abroad. 20,000 Dublin families lived in one-room tenements.

The Abbey Theatre audiences on the fourth night of its original run in 1926 did not take kindly to the Irish being represented as brawling men and women: cowards, looters, windbags, drunkards, prostitutes and, most shocking of all, mothers who brought their babies into a pub and the forgot them and left them there.

But it was the Irish Citizen Army flag (the plough and the stars) being brought into a pub which set off the riots.

W.B.Yeates, artistic director of the Abbey, remembering what had happened in 1907 at the premiere of Synge’s The Playboy of the Western World and anticipating a disturbance, had prepared a speech, which he had already sent to the newspapers.

Yeates lambasted the audience “You have disgraced yourselves again. Is this to be an ever-recurring celebration of the arrival of Irish genius?”

What the rioters objected to was that O’Casey sided with the victims rather than the heroes. Such was the furore O’Casey abandoned Ireland and lived in England for the rest of his life

Jeremy Herrin and Howard Davies’s production switches from farce to tragedy and back again seamlessly and especially in the memorable third act with the dying (serious) and the looting (comic) side by side.  The play is saved from melodrama by the intensity of the feeling and the humanity of the characters, so vividly realised.

The Plough and the Stars is the third in a trilogy of Dublin plays which includes The Shadow of a Gunman and Juno and the Paycock. It would be great one day to able to see O’Casey’s trilogy performed as a trilogy by Irish actors.