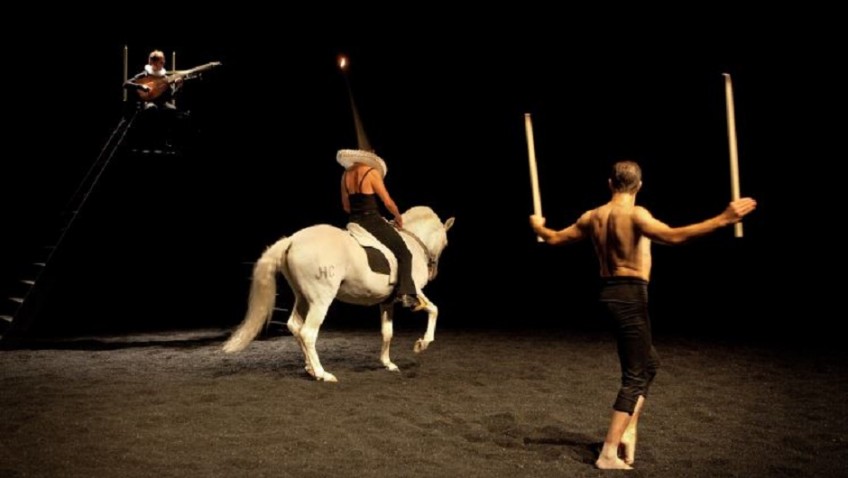 A religious ritual with horses on stage

There are not many stage roles for horses these days.

There were plenty of roles for horses in the Victorian era; and most famously at Astley’s Amphitheatre, equestrian dramas were all the rage.

One of the biggest successes of the 19th century was an equestrian burlesque of Lord Byron’s Mazeppa.

There was even a production in 1856 of a much cut Shakespeare’sRichard III , subtitled The Death of White Surrey, in which the horse was the leading role.

Golgota is a collaboration between equestrian Bartabas, flamenco dancer Andres Marin and four horses. They echo and respond to each other presence.

The show is inspired by the rituals of Holy Week in Seville and with a title like Golgota you know the piece is going to end in a crucifixion.

The props include candles, ruffs, hoods, hand-bells,, thurible and incense. There are references to El Greco and Zurbaran.

The sacred music is by Thomas Luis de Victoria, a catholic priest (1548-1611), and played on cornet and lute and sung by a counter-tenor.

There is some nifty foot-stamping from Marin who slaps his bare chest and thighs whilst Bartabas rides around. The horses, very obedient, very stoical, stand still, circle, trot, dance, collapse, roll about on the ground and do a bit of Olympic dressage.