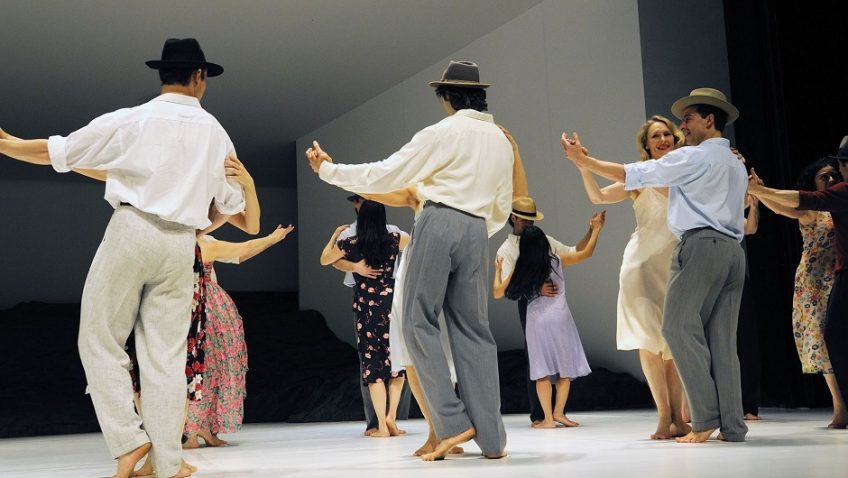 Pina Bausch can always be relied on to fill a theatre

The name Pina Bausch (1940-2009) can still fill a theatre and Tanztheater Wuppertal, which she founded in 1973, continues to revive her repertoire, which numbers 44 pieces.

Bausch, one of the key choreographers of the 20th century, abandoned classical ballet to concentrate on interplay between dance, movement, speech, costume and set.

Masurca Fogo was the result of a visit to Lisbon, one of several world cities who commissioned her.

Bausch and her dancers took their inspiration from Portugal, Brazil and Cape Verde. You can watch Bausch in rehearsal on YouTube.

The result is a playful, sensual piece, set on a beach surrounded by black rocks, down which many in the cast make their entrances. It is not one of her best productions.

Men and women (in sexy, slinky dresses and slips) flirt, tease, lark around and sometimes humiliate each other.

Men ogle women and sigh loudly. Two diners throw glasses of water at each other and roar with laughter.

There is a lot of running around, cavorting and addressing the audience direct.  There is also a lot more solo dancing than usual.

An attractive woman has a foam bath and her manservant takes the opportunity to wash the dishes. Another woman has a cup of tea and pours a whole bag of sugar into it so that the cup completely disappears. A third woman is waterboarded.

A blonde enters, her body covered in balloons. She offers cigarettes to the men who light up and you know what happens next.

A man, small of stature, unable to reach the lips of a tall woman, gets a friend to lift him high above her.

A banana skin is thrown in a dustbin. The dustbin throws it out. A hen is given a watermelon to eat.  A walrus lumbers across the stage twice.

The whole cast build a beach-hut at speed, dance inside its cramped quarters, and then dismantle it at speed.

On the cyclorama, enormous waves crash and Georgia O’Keefe flowers have orgasms

English National Ballet will be performing one of Pina Bausch’s masterpieces, The Rite of Spring, in March at Sadler’s Wells.