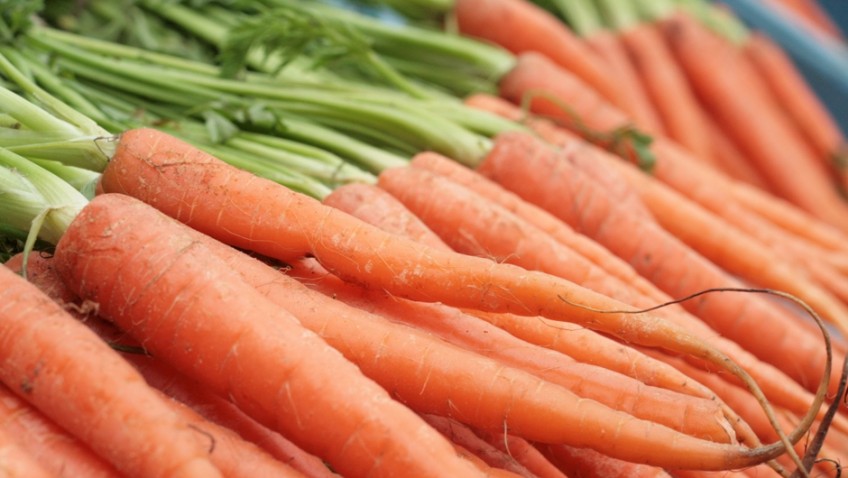 Be ready for International Carrot Day

The anniversary is increasingly popular and on April 4th 2012 carrot celebration was reported from France, Italy, Sweden, Russia, Australia, UK and Japan.

When they were first cultivated, probably in Persia, carrots were grown for their aromatic leaves and seeds rather than their roots. Some close relatives of the carrot are still grown for their leaves and seeds, for example parsley, fennel, dill and cumin. The plant appears to have been introduced into Europe via Spain by  the Moors  in the 8th century, when the roots were purple. The modern carrot originated in Afghanistan at about this time and were described as both red and yellow.

Orange-coloured carrots appeared in the Netherlands, in the 17th century, where the flag included orange. Purple carrots, still orange on the inside, were sold in British stores starting in 2002.

The carrot gets its bright orange colour from beta-carotene and contains vitamin A. A 100g serving of carrots can provide more than 100% of the daily intake of this vitamin. They are also a good source of dietary fibre, vitamin K and vitamin B6.

Western culture’s understanding of carrots being “good for the eyes” is one of the few ‘old wives tales’ we got right. Carrots are rich in beta-carotene, which is converted into vitamin A in the liver. Vitamin A is transformed in the retina, to rhodopsin, a purple pigment necessary for night vision.

Studies have shown carrots reduce the risk of lung cancer, breast cancer and colon cancer. Researchers have just discovered falcarinol and falcarindiol which they think may cause the anti-cancer properties.

Falcarinol is a natural pesticide produced by the carrot that protects its roots from fungal diseases. Carrots are one of the only common sources of this compound. A study showed 1/3 lower cancer risk by carrot-eating mice.

The high level of beta-carotene acts as an antioxidant to cell damage done to the body through regular metabolism. It help slows down the aging of cells.

Vitamin A and antioxidants protects the skin from sun damage. Deficiencies of vitamin A cause dryness to the skin, hair and nails. Vitamin A prevents premature wrinkling, acne, dry skin, pigmentation, blemishes, and uneven skin tone.

Carrots are known by herbalists to prevent infection. They can be used on cuts – shredded raw or boiled and mashed.

6.  Promotes healthier skin (from the outside)

Carrots are used as an inexpensive and very convenient facial mask. Just mix grated carrot with a bit of honey.

Studies show that diets high in carotenoids are associated with a lower risk of heart disease.  Carrots have not only beta-carotene but also alpha-carotene and lutein.

The regular consumption of carrots also reduces cholesterol levels because the soluble fibres in carrots bind with bile acids.

Vitamin A assists the liver in flushing out the toxins from the body. It reduces the bile and fat in the liver. The fibres present in carrots help clean out the colon and hasten waste movement.

It’s all in the crunch! Carrots clean your teeth and mouth. They scrape off plaque and food particles just like toothbrushes or toothpaste. Carrots stimulate gums and trigger a lot of saliva, which being alkaline, balances out the acid-forming, cavity-forming bacteria. The minerals in carrots prevent tooth damage.

From all the above benefits it is no surprise that in a Harvard University study, people who ate more than six carrots a week are less likely to suffer a stroke than those who ate only one carrot per month or less.

There are plenty of recipes using carrots but our favourite in the office is carrot cake.  If anyone out there would like their cake tested by a panel of experts we are happy to eat it as part of a scientific test!