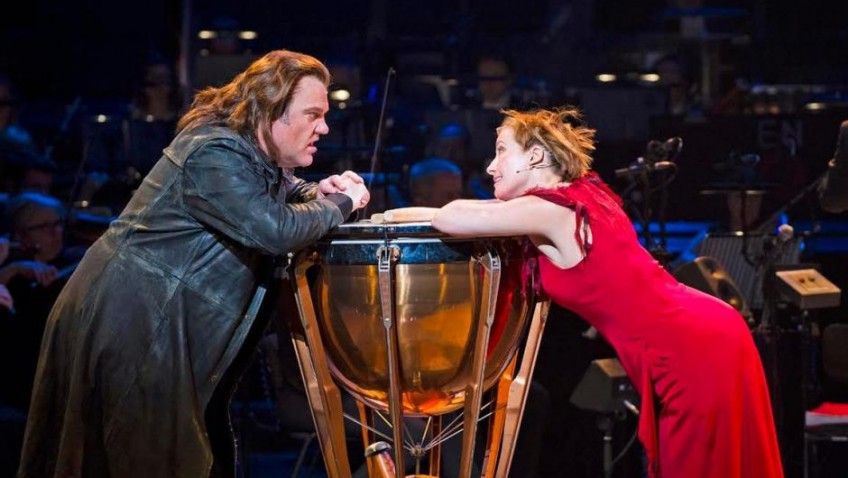 I saw Sweeney Todd only ten days ago in a pie shop, seating just 70. And now I have just seen Sweeney Todd in the largest theatre in London with a capacity of 2,359.

Is Sweeney Todd a musical or an opera? Some may think, because it is being staged at the London Coliseum, it’s an opera; but it is being billed as a musical. The Coliseum, before ENO took over, used to be the home for musicals.

Bryn Terfel, who plays the demented barber who slits throats, is a great bass baritone whose roles include Figaro, Falstaff and Wotan.

Emma Thompson, who plays Mrs Lovett who turns his victims into pies, is a highly accomplished film actor. The last time she appeared on the musical stage was when she appeared in Me and My Girl thirty years ago.

Sondheim called Sweeney Todd a musical thriller. It is his musical masterpiece.

Lonny Price’s semi-staged production was conceived for the New York Philharmonic in 2014. It is quite unlike any stage concert performance I had seen. It is certainly the most theatrical.

Sweeney Todd, The Demon Barber of Fleet Street began as a “penny dreadful” in 1846 and even before the serialisation was complete, George Dibdin Pitt in 1847 had turned it into a Victorian “blood tub” (a violent and sensational melodrama for the stage).

Sondheim has turned the grand guignol into something vastly superior with a great score and clever and witty lyric lyrics.

It is totally characteristic of this brilliant show that the most haunting music (“Johanna”) should be sung at the very moment when Todd is cutting throats so that the audience actually wants another murder so that they can hear the song again.

Mrs Lovett, his partner in crime, is conceived as a popular music hall turn, a deliberate comic caricature and is played as such by Emma Thompson with abandon.

There is good support from Matthew Seadon-Young as a young sailor in love, from Philip Quast as the vile Judge (who seduced Todd’s wife and stole his daughter) and from Alex Gaumond as the creepy Dickensian Beadle.