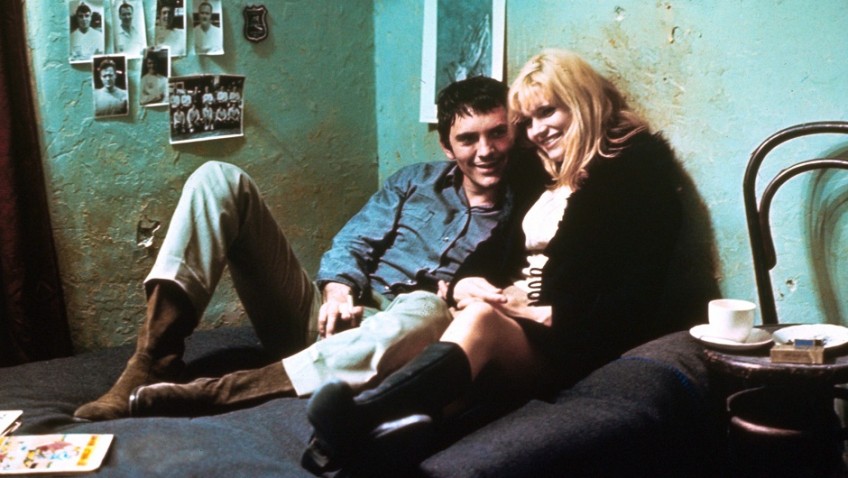 POOR COW (StudioCanal). Ken Loach, Nell Dunn and Carol White followed up their success on television with Cathy Come Home with this British New Wave film in 1967. It made quite a stir with its fragmented and improvised little scenes of contemporary working-class London life.. White played a young mother with an abusive husband (John Bindon) and a kind boy friend (Terence Stamp). They both end up in prison. She poses for a group of dirty old men with cameras. She also has a comic meeting with a solicitor (Ellis Dale) to discuss divorce.  Ken Loach, addressing social issues and women’s new-found sexual permissiveness, gave the film a gritty, non-judgemental documentary approach in the Jean-Luc Godard manner.

10 CLOVERFIELD LANE (Paramount). A young woman (Mary Elizabeth Winstead) wakes to find herself in an underground bunker, a deluxe Doomsday bomb shelter. Her abductor (John Goodman) claims he saved her during a nuclear chemical attack and that everybody above ground is dead. “I’m not some pervert,” he insists. She has to decide between the monster in the bunker and the monster he says exists outside. Dave Trachtenberg directs a good, tense thriller and keeps you guessing whether Goodman (excellent) is telling the truth or not. I wish the ending hadn’t been so conclusive. Better to have left it in the air whether there had been or had not been an apocalyptic disaster.

MIRROR (Fusion) is a very personal memoir of a Russian childhood in World War 2. Some critics rate Andrei Tarkovsky’s 1975 film very highly, putting it amongst the greatest films ever made. Many will find it obscure and incomprehensible. One way to think of it is a visual poem. It’s a series of images, thoughts, fragments, past and present. There are newsreels from the war. One of the high spots, full of cinematic bravura, is an extended sequence of a woman panicking in a publishing factory, fearing there is a major error in the text. It is said to fully appreciate the film you have to see it more than once.

ANTONY AND CLEOPATRA (Network). Trevor Nunn, former artistic director of the RSC and National Theatre, and one of the great stage directors of our time, has directed every play of Shakespeare. It is an amazing achievement. This production for the RSC dates from 1972 and looks what it is: filmed theatre. Richard Johnson is Antony. Janet Suzman is Cleopatra.  Antony is completely washed up; and he knows it. He is no longer able to think straight. His dissolution has warped his judgment.  Cleopatra has always had a bad press and Shakespeare like everybody else sees her through the biased, severe eyes of Rome, who loathed her because they were frightened of her. There is no indication in the text of her intellectual powers at all. What we are given is almost a parody of sexual obsession. Patrick Stewart is Enobarbus. Corin Redgrave is Octavius Caesar.