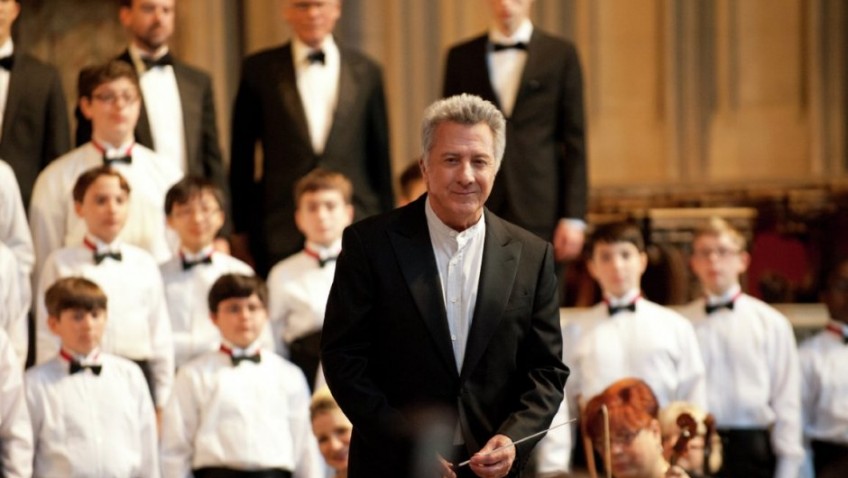 A pointless waste of old and possibly new talent

Joyce Glasser reviews the talent of The Choir with Dustin Hoffman

If anyone doubts there is a shortage of good roles for septuagenarians, take a look at Dustin Hoffman who won two ‘Best Actor’ Academy Awards, and is now playing a choral master in a pointless, cliché of a movie called The Choir. Perhaps the saddest element of this fiasco is that the Director is Francois Girard, 52, who wrote and directed the marvellous Thirty-Two Short Films about Glenn Gould and the Red Violin and that Ben Ripley, who wrote the inventive Sci-Fi film Source Code wrote the lame script.

The story is as familiar as the setting. After the novelty of Whiplash, we are back in a sedate boarding school for posh boys who have a couple of years to travel the globe and shining as soloists before their voices crack.

Twelve-year-old Texan Stet (Garrett Wareing) is obviously bright, but his alcoholic, overworked, single mother and rundown home have turned him into a frustrated, troublesome delinquent. He is really gentle and caring as we see when he returns to home and dumps the cheap booze out of the bottles.

Recognising Stet’s beautiful voice, the school’s saintly principal, Mrs Steel (a wasted Debra Winger) arranges an audition before the famous, awesome choral master Carvelle (Hoffman). When Stet, intimidated by Carvelle’s second in command, Drake (Eddie Izzard), runs out on the audition, Carvelle is not only insulted, but convinced the boy lack’s the necessary drive and discipline. It is half way through the movie before he allows himself to recognise Stet’s brilliance and the predictable father/son relationship develops. That artificial tension is replaced by the arrival of Stet’s estranged father, Mr Gerard (Josh Lucas), hiding in New York City with a new family.

To make a long story short, when Carvelle rejects Stet’s application to the elite choral academy, Gerard, eager to get Stet off his hands, pushes a fat cheque across the desk of the chief executive (a superb Kathy Bates), who overrules Carvelle. This bribe might be the only scene in the film that rings true!

A new tension develops between Stet and the obnoxious soloist Devon (Joe West) who concocts a dirty tricks campaign to get Stet expelled. Amazingly, all the boys go along with it. Determined to succeed if only to beat Carvelle and Devon, Stet miraculously learns to read music and memorise all the songs in the repertoire in a few weeks and, well, you can guess the rest.

While the story depends on Stet being a bullied fish out of water at the academy, Wareing is a scrubbed and well-spoken former model who, were he British, would be on the rowing team at Eton. Although Wareing does in fact come from Texas, he appears to have lost much of his accent in his new Los Angeles acting class.

While everything about the film is familiar (Devon is a rip off of Draco Malfoy in Harry Potter) and predictable, the biggest con is that none of the boys are actually singing. What is the point of making a movie about a boys’ choir with unknown actors lip-synching to recordings of the American Boychoir School in Princeton New Jersey?