Home / LIFESTYLE / REVIEWS > / FILM REVIEWS / A superb and unmissable documentary about the man who defined how we look at modern architecture. 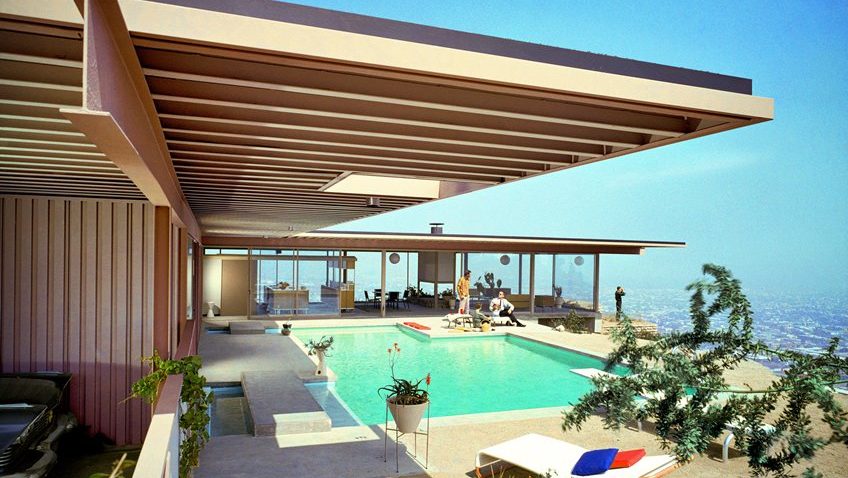 A superb and unmissable documentary about the man who defined how we look at modern architecture.

Visual Acoustics: The Modernism of Julius Shulman (on Blu-Ray and Digital Platforms from November 30, 2020)

Architects live and die by the images taken of their work. For every person who visits a private house, there may be ten thousand who view it as a photo. The functional narration is by Dustin Hoffman, but the gorgeous photos are by the photographer who defined the way we look at modern movement architecture: Julius Shulman.

This superb documentary was made just before Shulman’s death, at 98, in 2009, but never released in the UK. This loss is now redressed with its release to correspond with the publication of a book by the film’s producer, Will Paice, and its director, Eric Bricker. If you like architecture and looking at beautiful houses, Visual Acoustics is as informative as it is entertaining, so you may want to see it more than once.

The film is divided into useful sections. “Beginnings” summarises Shulman’s life from his birth in the Bronx on 10 October 1910 to his blissful childhood in rural Connecticut, where his connection to nature and environmentalism took root, to his family’s move to Boyle Heights, East Los Angeles where he grew up with the city.

After seven years of university, Shulman quit without a degree, determined to find an interesting career. His break came in 1936 when a draftsman friend invited him to look at a new house. ‘I had not even seen a modern house before,’ Shulman says, but he took a picture. The architect, Richard Neutra, saw it and hired him. Neutra’s instruction, growing reputation and his address book helped launch Shulman’s career. Neutra introduced the young photographer to Rudolf Schindler, Gregory Ain, Harwell Harris, Raphael Soriano, JR Davidson and others, so that his portfolio stretched from Southern California to Palm Springs. Later, we witness Shulman’s moving reunion with E. Stewart Williams, the architect of Frank Sinatra’s house in Palm Springs.

If Neutra thought he was getting an obsequious, malleable assistant, he was wrong. Despite their long, mutually beneficial relationship, Judy McKee, Shulman’s daughter, and Raymond Neutra, Neutra’s surviving son, describe with humour their respective fathers’ bickering. To the architect’s annoyance, Shulman would carry around props and furniture to make the pristine house looked lived in, while, to Shulman’s annoyance, the architect would have young Raymond hold an “archetypal” branch over the camera lens to suggest landscaping.

One of the joys of the film is that Shulman, old and frail, but sharp, humorous, opinionated and possessing an astonishing memory, is our guide to his life. We hear wonderful anecdotes; see him being reunited with legendary architects and the original owners of the houses he shot, and meeting new owners, determined to restore compromised houses such as Neutra’s Miller House. We also see him arguing with his assistant about the dark shadows in the corner of Frank Gehry’s Disney Concert Hall (2003) – from whence, the title – and interacting with his new publisher, Benedikt Taschen.

Adoring fans at a reception at the famous Malin Residence (1960) hear that Shulman first photographed it in 1961. This engineering marvel, that looks like a flying saucer tree, perching on the slope of a canyon overlooking LA is the work of John Lautner. Lautner, as we learn in a section on “Old Masters”, was Frank Lloyd Wright’s most promising protégé, who combined architecture and engineering to such sensationalist effect that most of his homes have been used as movie sets (including the films Diamonds are Forever, The Big Lebowski, and Twilight). Like many modernist houses, the Malin residence had been neglected and altered after enduring multiple owners but was purchased and restored by Taschen, with his then wife, Angelika.

As Shulman’s fame grew so did his world. In the “International” section, we see Shulman reunited with one of Mexico’s greatest modernist architects Ricardo Legorreta (who died in 2011, two years after Shulman) at an exhibition of photographs of his buildings. Legorreta explains that his daughter, inspired by Shulman, took the recent pictures. ‘Why not?’ Shulman quips. ‘It’s a great business. The architects do all the hard work and you come along and take pictures.’ The only thing missing from this film is the business side of the profession. Presumably, since photographers hold the copyright to their photos, the more magazines they appear in, the better it is for both the photographer and the architect being showcased. A section on architectural publications shows the extent to which Shulman’s photographs shaped the way the public’s view of Modernism and publicised it.

If you do not know who Richard Neutra is, you will. After “Beginnings”, we are treated to a potted history of the international modernist movement which began with Louis Sullivan in Chicago. Adolf Loos in Vienna, who denounced ornament as a crime, was a Sullivan devotee and encouraged his top students, Richard Neutra and Rudolf Schindler (contemporaneous Austrian architects) to seek out Sullivan’s protégé, Frank Lloyd Wright in America. Both eventually did, and both ended up in California fusing European and Chicago modernism with their own idiosyncratic styles that blended architecture with the desert and canyon landscape. Young Shulman, too, worked with Frank Lloyd Wright. He has kept a letter Wright sent him after seeing Schulman’s photos of Taliesin West: ‘Your photography is credible for an amateur and better than most professionals.’

Another section of the film is the Case Study House Program (1945-1966), initiated by Art and Architecture Magazine editor/publisher John Entenza in an experiment to create well designed homes for the “average” post WWII family. The majority of these homes, designed by legendary architects, were immortalised by Shulman. The most iconic is Case Study House # 22, the Stahl house, frequently seen in films. A high point of the film is Shulman’s reunion with the Stahls, who impulsively bought the plot of land 2 hours after seeing it, but needed architect Pierre Koenig to build that famous living room cantilevered over the side of the canyon with the lights of L.A. below. Cinematographer Dante Spinotti (The Insider, L.A. Confidential), who did additional photography for the film, benefits from a lesson in depth of focus lighting from Shulman whose photo of the Stahl living room with the lights of Los Angeles beyond is one of the most famous in architectural history.

We see Shulman’s archives being bequeathed to the Getty Institute in LA. One of the most important uses of the photographs today is in the restoration of modernist houses. The Kaufman House’s new owner tells us that without Shulman’s photographs, some of which had not been published, they never could have restored the house. The owner’s young architects for the restoration, Chris Shanley and Leo Marmol tell us that Shulman’s photographs captured not only a house’s sensibility and aesthetic, but what it felt like to live there. ‘Every architect today has to somehow resolve the mythology that Julius captured.’