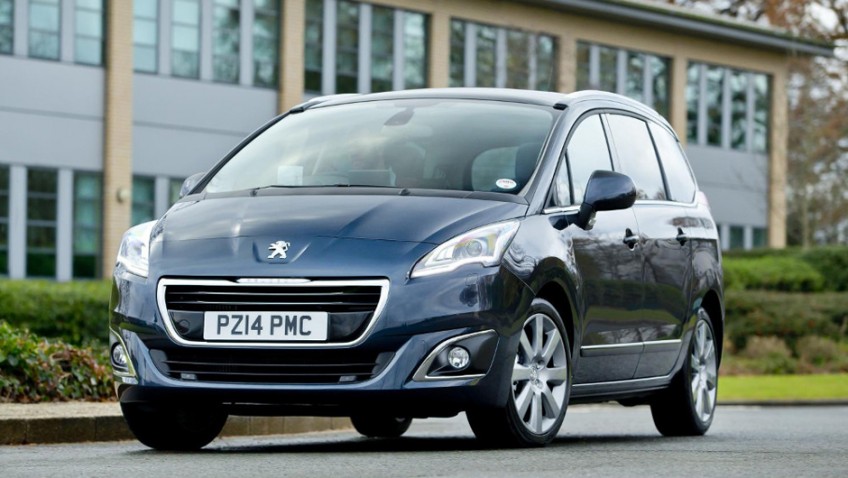 You see a lot of MPVs around these days, and those who haven’t owned one might well be wondering why they’re so popular; after all, the traditional people carrier, inevitably fairly tall and in some cases sporting a van-like profile, is never going to win an automotive beauty contest.

The answer is ‘practicality’. Larger families certainly see the point of having four or five seats in which their children can be safely planted, and grandparents, used to picking up their grandchildren from possibly two or three schools, will be grateful for the ease with which they can then take them to football training and music lessons via the swimming pool and mid-week party. The most spacious MPVs offer seating for seven, and I recently took one to France, not with children, but four adults who know not the meaning of ‘travelling light’.

Our first surprise with the Peugeot 5008 was the ease of installing all the luggage. Four major suitcases, two smaller ones, plus an assortment of canvas and plastic bags, a couple of large boxes and other smaller stuff that could be poked into the minuscule holes left in this feat of packing, all of it was swallowed by the boot, with no need to utilise the space in the passenger compartment that can be realised through removing one or more of the second row seats. Plenty of room for legs and heads too, so not once in the thousand or so miles did I hear complaints on that score. Engine choice for the 5008 is predominantly diesel, with 1.6 and 2-litre offerings; the only petrol engine is the three-cylinder 1.2, which though its power is a remarkable 131PS, will need the revs kept high to make use of it. Our 5008 was powered by the 1.6 BlueHDi diesel engine. BlueHDi is what Peugeot call their latest Euro 6 diesels, and if you’re unsure about Euro 6 this is just the latest requirements with which all diesels used on the roads of Europe must comply.

It’s worth reading the full details of what is involved (just Google ‘Euro 6 requirements’), but in brief the result is diesel engines that are vastly cleaner than even the last Euro 5 types. In terms of fuel consumption, diesels are of course naturally better than petrol engines, and therefore emit less Carbon Dioxide; we saw a fairly consistent mpg figure of just under 50mpg, which for a car of this size, carrying a considerable payload, is a good number.

In fact it’s better than expected for another reason, which is the gearbox – an EAT6 box, which translates as Efficient Automatic Transmission 6-speed. It certainly changed smoothly, and not excessively as some autos are inclined to do, and though I’m not an enthusiast of auto transmission it certainly made sense on the M25 where we experienced a long delay – an all too common event for users around the M4 and M3 intersections. Official consumption figures give identical figures for the manual and auto boxes, but going for the manual saves a buyer £1,000. Our Allure specification car was well equipped, though the basic Active spec is not ungenerous. One aspect that drew much praise was the Cielo glass roof, which though it doesn’t open, nonetheless brightens the interior superbly and allows everyone to appreciate the architecture that surrounds them when going through cities, the upper stories of whose houses would otherwise be invisible. The roof is standard on Allure models, and available as a £370 option on the Active.

Take a casual look at the 5008, and it’s evident that you’ll be sitting fairly high in it. That’s good news for those who feel more in control when they’re higher than the majority of traffic that surrounds them, but equally importantly getting into and out of the car is much easier than negotiating the low-set seat of a typical hatchback or saloon. Until you’ve tried one after the other you don’t realise how much easier the high seat can make life for those with a dodgy back or leg. It’s one of the prime reasons that some buyers go for an MPV.

After our return I asked all my passengers what they thought of the 5008, and like me they were almost universally complimentary. It’s a lot of car for the money, has a comfortable ride whether you’re seated at back or front, and is remarkably quiet on the motorway. Talking of motorways this was the first time I’d ever been to France and managed to avoid all tolls, without actually trying; it was simply the benefit of heading west from the ports rather than east or south.

The 5008 sound system is good, but the inbuilt sat nav system got a lower score; it takes some learning, and more than once refused to accept a simple English postcode.