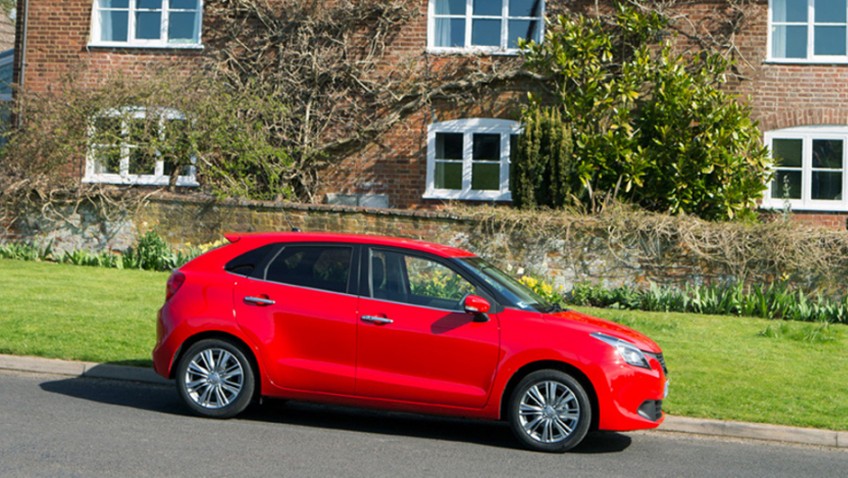 The launch of this new Suzuki might come as a surprise to those with long memories, for they’ll have the feeling they’ve been here before. And yes, the Baleno is indeed a name from the past. Suzuki first used it in Europe back in 1995, with a small car that was available as saloon or hatchback, and was known in Japan, remarkably, as the Cultus Crescent. The company obviously liked the Baleno name, for it’s now used by their latest hatchback which Suzuki see as “a new hatchback for a new era”. 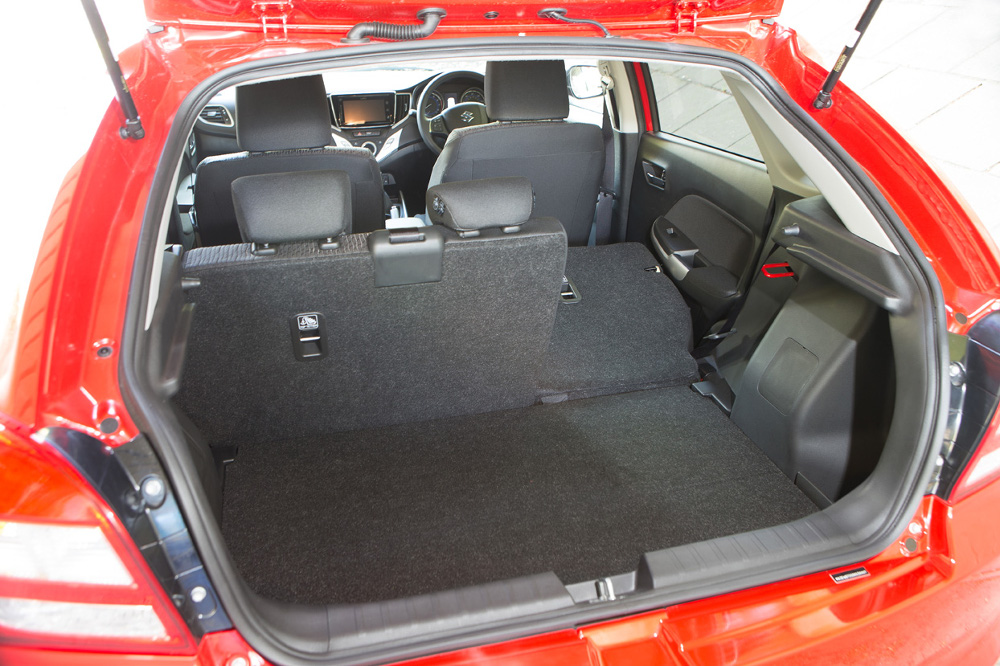 Built in India, the Baleno is certainly a practical motor, with five doors and a fairly spacious boot. Bearing in mind its body length of under four metres, you might expect leg room to be tight, but in fact there’s ample in both front and rear seats. Even sitting behind my preferred front seat position, which is a touch greedy, my knees didn’t touch the back of the front seat, and head room too is plentiful.

Two engines are offered. The smaller is a 3-cylinder unit of just 1-litre capacity but amazing performance. Just about every manufacturer is using a small 3-cylinder these days, or just about to, but Suzuki’s offering, called ‘Boosterjet’, is better than most. Power is 111PS, which a few years ago would have been impressive from a 1.6. The advantage of such a small engine is of course that it can be cheaper to make but has the ability to return impressive fuel figures. The official combined consumption figure of the Boosterjet is 62.7mpg, which is good for a petrol engine. This is the engine you get if auto transmission is what you want, though it has to be said that consumption with the auto gearbox is 8% worse than with the manual. 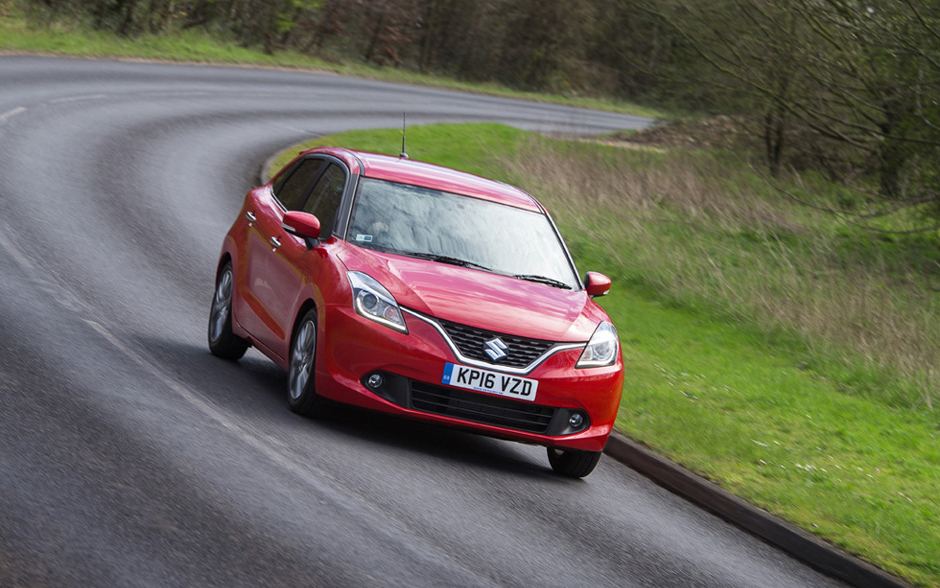 The other engine, also petrol, is a 1.2. This is fitted with what Suzuki call SHVS, an acronym that stands for Smart Hybrid Vehicle by Suzuki; they also use the term ‘mild hybrid’, as the electric output is well short of what a full hybrid produces. In a normal non-hybrid car the alternator or generator charges the battery using a drive belt on the engine. In place of the alternator the Baleno has an Integrated Start Generator; this not only gives a higher charge to both the normal car battery and the lithium hybrid battery, but also takes care of the Stop/Start function; it merely reverses the charging action and turns itself into a mini starter motor. The advantage of that is near silent and instant starting of the engine when you’re ready to move. It really is the sensible way to run a Stop/Start system, and works brilliantly well. The overall gain in using a mild hybrid system can be gauged from the official fuel consumption: 70.6mpg compares well with cars of similar size, even the diesel ones. Baleno dimensions, incidentally, are close to those of Ford’s Fiesta.

Suzuki have made strong claims for the new car’s low weight, and much use of thin high-strength steels has helped here. However, the disadvantage of reducing weight can be a perceived loss of quality, and closing the rear doors does produce a sound that’s far from solid. It’s a small price to pay though for a noticeable gain in mpg. 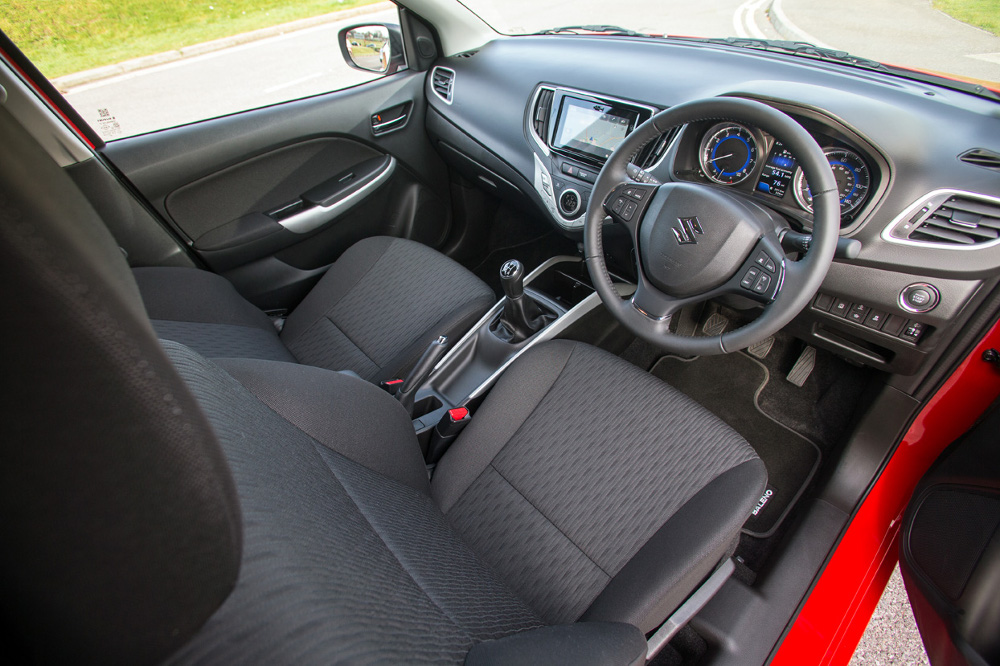 The Baleno is well equipped, and with just two specifications on offer it should be easy to choose the one that suits. Both have front, side and curtain airbags, air conditioning, alloy wheels, remote locking, electric mirrors/front windows, trip computer, automatic headlights, sat nav, digital radio, and much more besides. The only obvious absentee is reach adjustment for the steering wheel, which is only available on the upper SZ5 model.

There’s much to like in Suzuki’s new motor, and priced as it is there will be a lot of interest. It’s well equipped and features a good deal of modern technology, such as the smartphone linkage to the audio system, which will excite the technophiles.