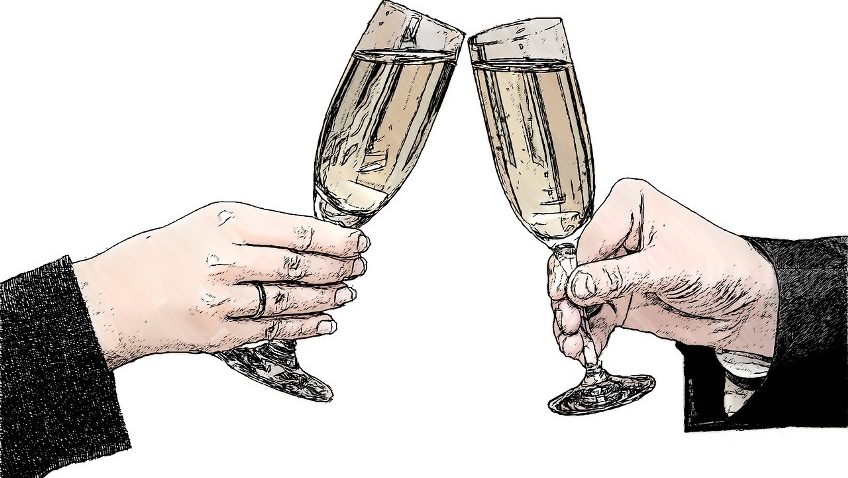 Sparkling wine has bubbles because there is trapped carbon dioxide gas dissolved in the wine. Removing the bottle’s cork releases this carbon dioxide and it escapes through the wine forming a trail of bubbles.

The size and lasting power of these bubbles will depend on whether the initiating carbon dioxide got trapped there by fermentation in the bottle or fermentation in a larger tank. The “Champagne Method” (also known as “methode champenoise”) is to use bottles to store the just-finished wine that have a small dose (dosage) of sugar added to re-start any left-over yeast into action again. This re-fermenting yeast gives out carbon dioxide as part of the process, but now it’s trapped inside the bottle.

Large stainless steel tanks are cheaper to use than individual small glass bottles and the Italians realised this to create the “Metodo Italiano” – also known as the “Charmat” method after Eugene Charmat. Charmat was actually a Frenchman who perfected Italian Frederico Martinotti’s idea from 12 years earlier. Which is a blow for historical accuracy but there you are.

The resulting wines made by this “tank method” (another name for Charmat) are gently fizzy (semi-sparkling), which in Italy are known as “frizzante” (made famous by Lambrusco) or in Germany “spritzing”. Large bubbles are another feature of this method which sparkling wine purists look down upon while they sip their smaller longer lasting “mousseux” rising from their traditional method champagne.

Jaume Serra Ice Cava
£6.99 Aldi
3 star rating
Bottled specially for Aldi, this Spanish sparkling wine is designed to be drunk extra cold with lumps of ice and from large glasses. So if you try this wine at normal fridge temperature then the flavour is enhanced – the sweet-sour flavours of pear, lime and greengage are fruity and intense. But add some ice and these will be knocked back to the usual levels of quaffing fruitiness. An interesting wine that is worth experimenting with in terms of temperature and serving style.

Chalkdown 2015 Sparkling English cider
£12.95 direct from Chalkdown
3 star review
This lightly sparkling golden cider comes in the type of bottle that you’d normally expect to be filled with champagne. And it looks the part with a traditional wired cork covered in foil and a very smart label showing a butterfly. But inside it’s still cider. One with the aroma of digestive biscuits and apple puree and the taste, of well, cider. That is apple with that metallic tang of TCP antiseptic that many ciders possess. It’s simple and quaffable.

Monopole Heidsieck Blue Top Brut Champagne
£20 Sainsbury’s, £21 Asda, £28 Tesco
3 star review
Like many champagne manufacturers, Heidsieck has a range of champagnes to sell at various price points – the Blue Top is its entry level version. So don’t expect amazing flavours but do expect consistent levels of fizziness and a champagne that looks the part.