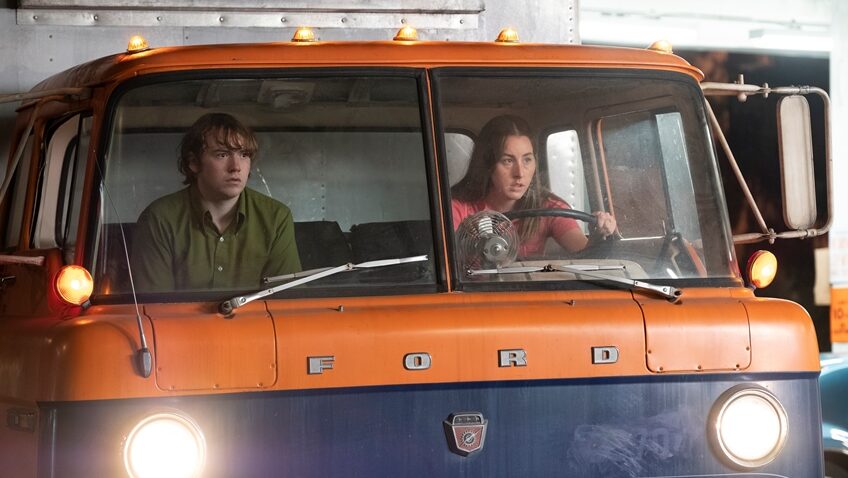 Paul Thomas Anderson is a show biz kid. Born in Studio City, in California’s San Fernando Valley, home of Walt Disney and Warner Bros studios, his father was an actor and ABC Television announcer. His early films, Boogie Nights, Magnolia, and Punch-Drunk Love, were set in or around the San Fernando Valley. For 2017’s Phantom Thread, Anderson travelled to England, but now, age 51, he is back in the San Fernando Valley for an ebullient, humorous, romantic comedy that is also a comedy-of-age story. Though set convincingly in the early 1970s (a few years before Boogie Nights), the setting is hammered home in a relentless, cameo-accumulating snowball so that the nostalgia starts to feel like a check list.

Licorice Pizza may be an Oscar contender, but will be remembered as the debut of Cooper Hoffman, whose father, the late Philip Seymour, was Anderson’s muse, appearing in five of Anderson’s six films before his suicide in 2014. Cooper has inherited his father’s charisma, talent, and an uncanny smile. But Cooper Hoffman here reveals a natural sex appeal and a knack for comedy.

In between his feature films, Thomas Anderson made music videos, and the lead female role opposite Hoffman was written for musician Alana Mychal Haim. Like Hoffman, Haim makes her impressive screen debut.

The coming-of-age story is inseparable from the rom-com in this plotless story. It is High School Photograph Day and 15-year-old Gary Valentine, student and sitcom child actor, is eyeing the photographer’s assistant, 25-year-old Alana Kane (Haim), strolling through the open courtyard in short shorts and small heels.

If Gary, an extroverted entrepreneur in search of a business, is 15 going on 20, Alana, who lives with her family (Haim’s real-life family play themselves in the film), is 25 and directionless. When Gary approaches her for her number, she rebuffs him more out of pride than inclination. For there is something about this charmer that makes her smile, and she likes the attention. The crime of Statutory Rape of a Minor never comes up in the film even though Alana could not argue that Gary looks 18. Her first putdown is disdainful: “You’re asking me out? You’re like 12!” Gary corrects her.

What is so real about the story is the duo’s double trajectory as Gary seizes on the current fads of 1973, such as water mattresses and pinball machines, to launch a business empire, while Alana tests a variety of jobs, searching for her place in the world. And as this is the Valley, they both keep one foot in the show biz world that envelops them, sometimes to support one another, and sometimes as competitors.

Almost every character in the film (as well as the dedication to the late actor/director Robert Downey Senior, who appeared as an actor in two of Thomas Anderson’s films) is based on a real person who inspired Thomas Anderson in his career. This is both a strength and a weakness, particularly when real-life characters appear more for their eccentricity than to drive forward the story.

When Gary’s mother’s (Mary Elizabeth Ellis) work commitments prevent her from accompanying her son to New York with the variety show Under One Roof with Lucy Doolittle, Alana – thrilled by a trip to New York – becomes the chaperone. Since Gary Valentine is based on 69-year-old Gary Michael Goetzman, a former waterbed salesman-turned-actor-turned-major Hollywood producer, the show itself is probably based on Yours, Mine and Ours. Lucy Doolittle (played by Christine Ebersole) would be Lucile Ball, who appeared in Yours, Mine and Ours with a young Goetzman.

Early on, Gary takes Alana, convinced that she wants to be an actress, to his agent, Mary Grady (Harriet Sansom Harris) who is based on real life child agent Lani O’Grady. ‘Say yes to everything,’ Gary has prepped Alana, who commits to being a multi-lingual athlete – which helps counter Grady’s concern about the “Jewish nose.”

When a pretty schoolmate flirts with Gary, Alana sulks childishly and then retaliates. When Gary shows up with his date at a popular Encino restaurant, he is amazed to see Alana on the arm of waning celebrity A-list actor Jack Holden (Sean Penn). Jack’s character is based on the Stalag 17 superstar William Holden, an alcoholic who died in 1981 after a fall. Gary is mightily jealous, but the posturing on both sides backfires when an inebriated Holden is coerced by director Rex Blau (Tom Waits). into performing a dangerous motorcycle trick with Alana holding tight. Holden fails to notice that Alana has fallen off the back of the bike and Gary rushes to her side.

If Waits and Penn ham it up, they are merely a warmup act to Bradley Cooper’s celebrity hairdresser, playboy and film producer Jon Peters, who was famously portrayed by Warren Beatty in Shampoo. But this episode is based on a true story related to Thomas Anderson by the waterbed company friends who really did install a bed in the home Peters was sharing with Barbra Streisand. It is also a mini homage to Philip Seymour Hoffman’s mattress man in Punch-Drunk Love.

The anecdote even incorporates the petrol crisis that year. In a comic gag, Peters runs out of gas on his way to meet Barbra at the cinema, flagging down the truck Alana is driving (as Gary is too young to drive), to flee from Peters’ flooding house. At first, Alana goes along with Gary’s juvenile revenge for Peters’ threats should they mess up the house. But, stressed by Peters’ sexual aggression and the daredevil driving, she alone realises the danger they were in. Sitting by herself on the curb, she watches an oblivious Gary laughing with his mates.

Arguably the best backdrop for Alana’s trajectory comes after the truck episode when Alana decides to get serious, grow up and work for Joel Wachs (director, actor Benny Safdie), who was, at the time, the youngest politician running for a seat on the Los Angeles County Council. Alana is flattered when Wachs calls her to a restaurant after hours and cancels a date with a handsome, sincere campaign aid. Her ego is deflated when she realises that Wachs, a closet homosexual (this is 1973), simply needed a female decoy for a meeting with his male lover in a public restaurant.

While the Wachs episode rings cannily true, others, introducing us to the eccentric Jerry Frick (John Michael Higgins) owner of the Mikado, the first Japanese restaurant in the Valley, feel like filler. But it is the manic course of the unlikely, romantic relationship that is universal and ultimately, profound. Thomas Anderson nails the insecurities of both Alana and Gary: how their posturing to save face backfires, and how their immaturity and growing maturity affects their relationship. And most enjoyably, he nails that euphoric feeling of youthful love.