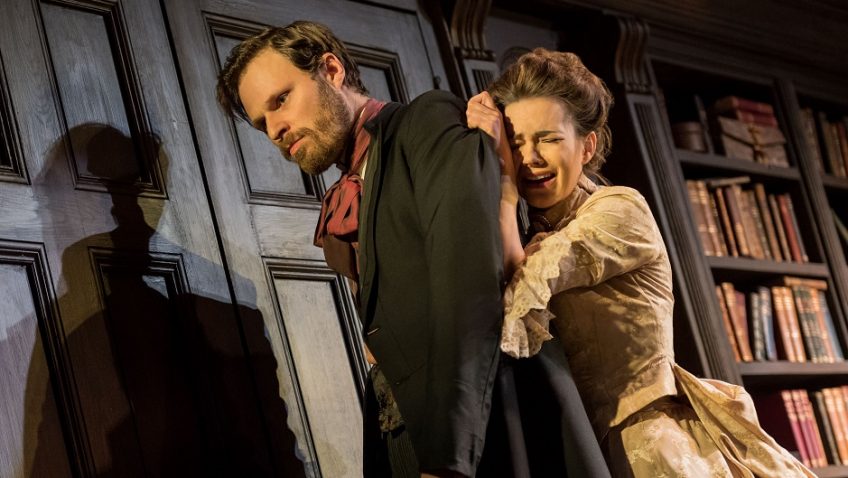 Patrick Hamilton had a big West End success in 1929 with Rope, which was based – though he denied it – on the Leopold and Loeb murder case in America.

Hamilton had an even bigger success in 1939 with Gaslight, his psychological Victorian melodrama, which he described as “sincere good fun theatre.”  Gwen Ffrangcon-Davies played the humiliated wife.

Gaslight has been filmed twice. The most famous is George Cukor’s 1944 version for MGM with two fine performances by Ingrid Bergman and Charles Boyer. Many people, however, prefer the earlier 1940 British black-and-white film directed by Thorold Dickinson with Diana Wynyard and Anton Walbrook. Both films are well worth watching.

There was also a television adaptation with Margaret Leighton and Louis Jourdan in 1960.

Gaslight is not a Victorian melodrama in the sensational style of Dion Boucicault. Hamilton is much nearer to Wilkie Collins. “It has,” he said, “a sort of genuineness in its very bogusness.”

Keith Allen, who plays a retired detective, who has been searching for a murderer for twenty years, is landed with an unnecessarily overlong exposition, which would benefit from cutting. Audiences are quicker off the mark these days and way ahead of the heroine who is almost stupidly slow on the up-take.

Manningham (Rupert Young) murders a woman for her jewels and then can’t find where she has hidden them. Twenty years on he has bought the house she lived in and is nightly still searching every nook and cranny.

He is married to a devoted, young wife (Kara Tointon) who is afraid she is going out of her mind. Manningham plays on her neurosis, humiliating and bullying her.

The two roles strictly speaking need to be played by older actors.  Kara Tointon does not look as if she has been married for seven years and her semaphoring arms are distracting. Rupert Young is not old enough to have been murdering twenty years ago unless he was a teenage murderer.

Anthony Banks’ touring production is not as unnerving as it could be, but Gaslight has always been a popular old warhorse and it can still keep modern audiences entertained in its old-fashioned way.