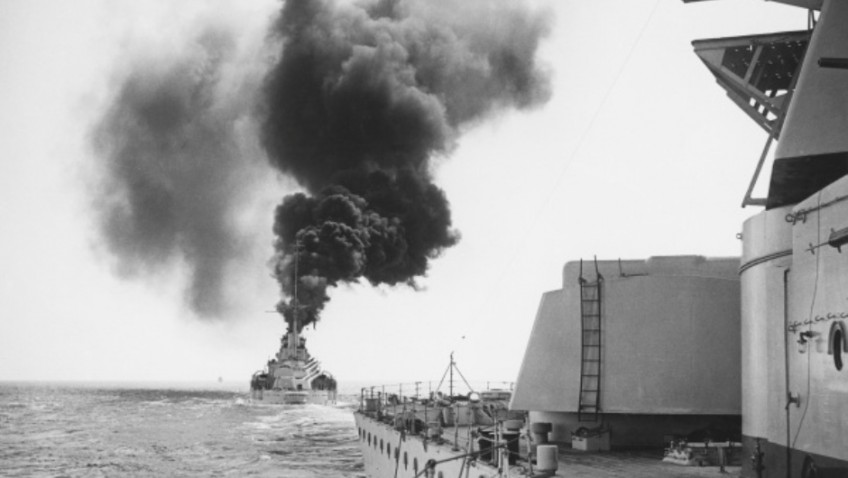 Director Walter Summers’ 1927 painstakingly restored docu-drama about two key WWI naval battles off the South American coast is one of the best kept secrets of the film legacy from the Great War.  Despite the absence of sound, Simon Dobson’s fantastic score, performed by the her Majesty’s Royal Marine Band notwithstanding, many will find The Battles of Coronel and Falkland Islands as suspenseful as Captain Phillips, another film that used actual working naval vessels (black coal bellowing monsters) to stand in for the ships.  Unlike Hollywood war movies, however, this is the only film where the battleships are credited but not the actors

Modern viewers will recognise the format which is one of a revenge thriller.  In the Battle of Coronel, off the coast of Chile, the British fleet, including HMS Good Hope, Glasgow and Monmouth, under the command of Rear Admiral Sir Christopher Cradock, is at a disadvantage when HMS Canopus, a warship with superior fire-power, is delayed 300 miles away. The decision to fight rather than flee was the wrong one, and while HMS Glasgow escapes, HMS Good Hope and HMS Monmouth sink, with no survivors. Although not explained in the film, it seems that the Germans did not pick up enemy survivors, but in a scene later on, which has a touch of propaganda about it, we see the British fishing drowning German sailors out of the freezing water.

The nation is not only shocked but demoralised by their first defeat at sea in 100 years.  As Germany celebrates Admiral Maximilian von Spee success with a lavish dinner party, (Von Spee nobly toasting ‘to a gallant enemy’), Admiral Jackie Fisher is preparing a counter-attack.  The element of surprise depends on his state-of-the-art gun-ships, the aptly named The Invincible and The Inflexible to set sail on 11th November, which means finishing the refitting of the ships weeks earlier than foreseen.  Summers devotes considerable time to these preparations, giving us a fascinating montage of the assembly-line shift work necessary to carry out Fisher’s orders.

The Battle of the Falklands is a brilliant piece of filmmaking by any standards.  Though remote, East Falkland Island is strategically important for its coal store and for Stanley’s wireless station. Von Spee believes that Stanley is a vulnerable outpost manned by one sleepy ship and a Dad’s Army of locals (who do indeed provide the humour in the film).  In his journal of Monday, 7 December he declares, ‘I shall hoist the German flat there tomorrow.’

Naturally, he is dead wrong. Though history provides the spoiler, giving away details of the dramatic counter-attack under Vice Admiral Sturdee would be criminal.  Far from reducing the tension, Director Summers’ enthusiasm for technical accuracy and detail only strengthens it.  Suffice it to say that the actor portraying Vice Admiral Sturdee, who executes Fisher’s tall order as if he were serving tea at Fortnum & Mason’s, is one of the most charismatic unsung heroes of the silent era.