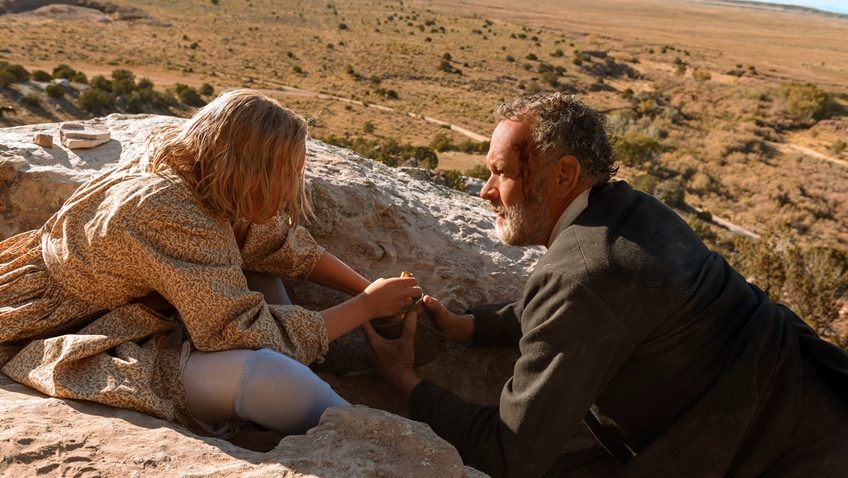 The closest Tom Hanks has come to a Western is his iconic role as Woody the Cowboy in Toy Story, but News of The World director Paul Greengrass has never really abandoned his origins in broadcast news and current affairs. From Bloody Sunday to his most recent documentary, Omagh, Greengrass has been disseminating news stories of prejudice, far right treachery and social injustice. Even his biographical thriller Captain Phillips, which starred Hanks as the eponymous hero, was a form of news reporting, bringing the real story behind the Maersk Alabama hijacking to life four years after it took place.

Now Greengrass and Hanks are reunited by a script written by Greengrass (with Luke Davies) and set in the aftermath of the Civil War. Though the plot is a cross between two John Wayne Westerns, The Searchers (also about a Confederate veteran in the Texas-Indian wars) and True Grit (a feisty young girl bonds with an unlikely hero to avenge her father’s murder in Indian Territory), the historic context sometimes feels like a pretext to write the news from today’s vantage point, exposing the truth behind the Confederate Army, the Pioneer Spirit and Manifold Destiny.

Hanks is Captain Jefferson Kyle Kidd, an itinerant news reporter in North Texas, 1870, at a time when American history was rapidly changing all around him. A former San Antonio publisher whose wife died of cholera while he was fighting in The Civil War, the traumatised Captain feels that he cannot go home again. He ekes out a living wandering through the 28th reading stories from a compilation of broadsheets for a ten-cent entry fee.

On route from one appreciative town to another, Captain Kidd encounters an overturned wagon and dismounts to discover a black Union Army soldier hanging from a tree. Then he hears a flourish and finds a very fair, ten-year-old girl in Native American dress, who only speaks in the Kiowa Tribe language. Following the arrival of a menacing Union Army patrol, the Captain learns that the soldier was escorting the girl, whose name is Johanna (German actress Helena Zengel, System Crasher), to a checkpoint so that the Bureau of Indian Affairs can try to trace any remaining family. With no other option, Captain Kidd reluctantly agrees to take the girl to the checkpoint. Once there, he learns that the Indian Affairs’ representative is on the reservations and will not return to the post for three months.

Captain Kidd wants to remain detached, but he feels for the “twice orphaned” girl whose emotional scars are akin to his own. Her German settler parents were apparent victims of a Native American raid, and now, the remains of the Kiowa tribe that took her to live amongst them is on a long march to far-flung reservations. Beginning with the hanged black soldier, racism rears its ugly head throughout the film, drawing a direct line to the happenings on Capitol Hill 150 years later.

Unable to leave the vulnerable girl alone to her fate, Captain Kidd agrees to take her to Castroville a small German Protestant settlement on the way to San Antonio, where it is believed Johanna has living relatives.

Here the influence of films such as The Gauntlet (a hard-nosed cop escorts a reluctant female mob witness across several western states) emerge in a familiar set up that can only mean one thing. The unlikely pair must team together to fight common enemies and overcome various obstacles, learning to leave the ghosts of their respective pasts behind and build a future for themselves.

Along the way the only encounter with real tension is a long chase scene with spectacular scenery where former Confederate soldier Almay (Michael Covino) and his thugs pursue Johanna after her guardian refuses to sell the girl to them. When Captain Kidd runs out of ammunition, the resourceful Johanna finds a clever solution, proving she is more than a helpless victim.

After this encounter with Confederate stragglers-turned-human-sex-traffickers, they encounter a militia living in a kind of Jones Town colony. We know these guys are bad before militia leader Merritt Farley (Thomas Francis Murphy), complains, “you got no idea what we deal with down here, blacks and Indians…” Greengrass takes us through a prairie full of bloody buffalo carcasses and little Johanna utters the Kiowa word for buffalo, who are being driven to near extinction. We then see the blood baths washing the buffalo skins and can almost hear David Attenborough describing the carnage.

We are in Trump territory, and it is Captain Kidd who outwits his captor, when Farley forces him to read the “approved” news that he published to brainwash the militia mob. Clearly a reference to today’s fight against fake news, Captain Kidd defiantly reads another story gambling on rallying the mob around his news of a mine owner whose disregard for safety standards puts the lowly paid miners at risk. Chaos ensues as the exploited mob identify with the miners, and now it is Johanna’s turn to save Captain Kidd’s life, not with her wit, but with a rifle.

“I never heard of news reading as a business”, a curious militia boy tells Captain Kidd, and he has a point. By 1870 there were newspapers in most small towns and even this red-neck militia boy, who was so intrigued by the miner’s story that he abandons the buffalo camp, can read. He heads off to the fledgling railroad (which was not completed until 1877) with the paper in hand, inspired to find a better life.

Whether the Captain found a gap in the market or not is a moot point, because Captain Kidd finds success, as we see in an epilogue, is not as a news provider, but as a storyteller. And Captain Kidd does bear a resemblance to the television storyteller Fred Rogers in Hanks’ last big film, A Beautiful Day in the Neighborhood.

Filmmakers think of themselves as storytellers, too, and you feel the affinity between the director and his character that is so strong it breaks the fourth wall. In a newspaper interview Greengrass praises Hanks’ sensitivity adding, ‘the soul of the man is beautiful’. But what the John Wayne movies (and Jeff Bridges in the Coen Brothers superb remake of True Grit) have over this western is a flawed character who has to earn his saintly status through the story. Here, while the excellent Helena Zengel blossoms before our eyes, Hanks’ journey is less convincing. News of the World carries a few worthy messages, but it lacks true grit.