Home / LIFESTYLE / REVIEWS > / FILM REVIEWS / The Oscar-nominated Turkish film that will leave you shattered but punching the air. 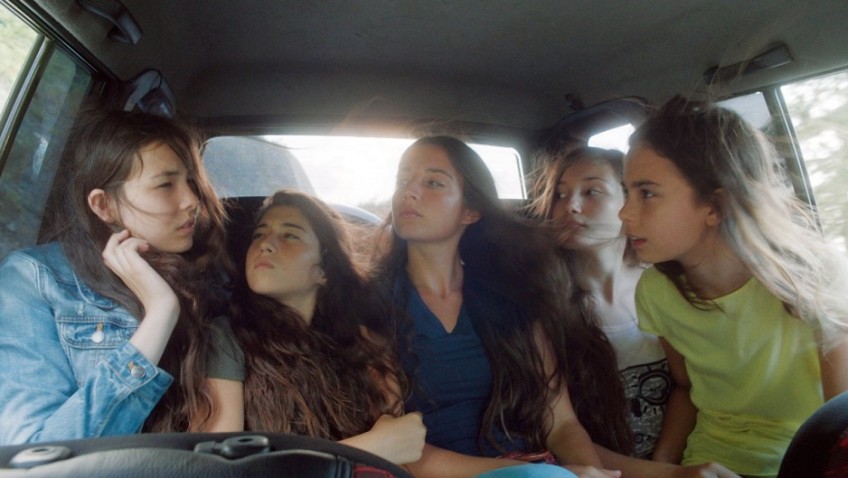 The Oscar-nominated Turkish film that will leave you shattered but punching the air.

Turkish-French co-writer/director Deniz Gamze Ergüven’s Mustang might have lost out to Son of Saul at the Academy Awards, but it is an equally astonishing feature film debut and one of the most important coming-of-age movies in years.  That being said, it is a stark contrast to another wonderful coming-of-age movie released this week: Richard Linklater’s Everybody Wants Some!   That could be an apt title for this film, too, but what the five sisters in Ergüven’s film want is their childhood, and the right to choose their own husbands. With its bracing, beautifully judged script (co-written with Alice Winocour, the writer/director of Disorder), its remarkable performances, and insightful portrayal of the position of women in Turkish society, Mustang should be on everyone’s must see list.

On the last day of school for the summer break, a young girl, Lale (Güneş Şensoy) embraces her female teacher, who is leaving the school to return to Istanbul.  The young girl and her four equally spirited, pretty, slender sisters frolic on the seashore with a group of schoolboys, riding on the boys’ shoulders in the surf.  Elated, they race to the home they share with their grandmother (Nihal Koldaş) and abusive uncle (Ayberk Pekcan) on the Black Sea, with little regard to the offense their conduct has caused. When they show up with the white shirts of their uniform wet and slightly transparent, they are sent for a virginity test, which they all pass.

Nonetheless, their uncle locks them in the house, and it is here they will pass their summer break, learning to cook and being presented to families with eligible sons.

Football mad Lale has other plans. She wants to join her classmates in attending a big match, but her uncle will have none of it.  The temptation, however, is too great. The girls sneak out and while they miss the coach by a whisker, they hitch a ride with a good-looking, floppy-haired young driver named Yasmin (Burak Yigit – so wonderful in the recent German thriller,Victoria) and soon catch up with the coach.  The girls return in high spirits and are delightfully surprised to discover that their aunt has cut the village’s electricity supply so that her son and their neighbours could not see the girls in the stands on television.  The aunt is not supporting her nieces’ bid for freedom, but rather protecting the family from shame.

The deception is nonetheless discovered when the girls plot various ways to escape their house detention. The plots backfire. Their uncle and grandmother are so afraid that the outgoing, and physically active sisters will lose their virginity that they plan to cut short their education and begin marrying them off.

Still, the sisters refuse to be broken, and even imprisoned in their rooms, they giggle, lie around chatting and revel in their physicality.  Ergüven infuses these scenes with close ups and a diffused light that evokes a joyful, languorous atmosphere of solidarity that contrasts with their helplessness.  She also ensures that the successive attempts at rebellion and escape offer very different and unpredictable outcomes, ranging from exhilarating and humorous to heart breaking and tragic.

While the story is told through the eyes of the bright, resourceful and protective youngest sister Lale, each of the sisters is given her own personality and story, two of which are harrowing. The pretty Sonay (İlayda Akdoğan) is the lucky one. She has been sneaking out at night to meet her handsome boyfriend from a good family and their marriage is approved.

While observing her older sisters being married off so young, Lale becomes increasingly determined to escape their fate.  Lale knows that Istanbul is the only place where a woman can hope to live independently, and she also learns that the key to her liberation is her ability to drive.  She asks Yasmin to teach her and, admiring the spirited girl’s resolve, he obliges.  Lale is a fast learner and with that knowledge under her belt, she masterminds a plan that has all the tension of the best thriller in any Cineplex.

Ergüven has made a riveting, nuanced film that always rings true, and will  leave you punching the air.  The only false step is the decision to make the already repressive, tyrannical uncle a sexually abusive pervert. It is overkill and could risk clouding the central issue.