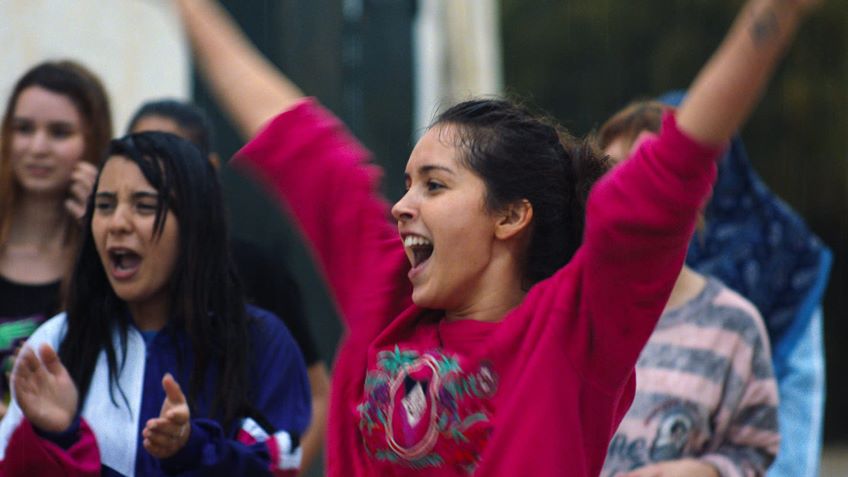 A star is born in this topical, feminist film debut, set in the 1990’s Algerian civil war

There are not many films that remind us – if we remember it all – of the brutal 1995 Civil war in Algeria, nearly thirty years after French colonial rule officially ended. Moreover, until Papicha, there have been none written and directed by a woman and told from a woman’s point of view. That might be reason enough to see the film: at stake was the relative freedom women had enjoyed prior to the 1995 Islamic insurgency, waged against an unstable and less-than-democratic government. The other reason to see the film is the spirited performance of Lyna Khoudri, the eponymous university student in revolt. In Papicha, which is “françarabe” (Franco-Arabic slang) for an attractive, hip and liberated woman, a star is born.

In the fast cut opening sequences, under cover of night, two young women are dancing in a nightclub in Algiers, having snuck off the university campus under a creepy guard’s suspicious eye. In place of dialogue, there is a montage of giggles, whispers, long legs, dancing, make-up and skimpy clothes.

The two young women are students Nedjima (Khoudri) and her best friend Wassila (Shirine Boutella). Although officially studying French, Nedjima expresses herself creatively through fashion and she sells the clothes she designs during her outings. Getting back to campus is more problematic, and the action, along with their taxicab, comes to a tense pause at a roadblock. The women know the routine and quickly wrap themselves in hijabs, frantically wiping the lipstick and smiles off their uncovered faces.

Writer-director Mounia Meddour’s first feature is part autobiographical, drawing on her years as a schoolgirl in Algiers in the late 1990s. When she was 17, her father, a filmmaker who received threats from the insurgents, moved the family to France where Meddour is based. Meddour wants her heroine, however, to remain and fight.

The plot revolves around Nedjima’s inflammatory fashion show in which her friends and fellow-students will model outfits made out of a pile of old haïks, which, in the film, is doubly symbolic. The haïk, the typical outer garment worn by Algerian women, was a symbol of female resistance during the years of French colonial rule when women would hide weapons under them. The haïk’s colour, white, is a contrast to the black niqab worn in the Gulf countries.

Fashion is a symbol of defiance against the fundamentalists on another front, too. Staging a fashion show at the university flies in the face of the doctrine that women should not draw attention to their bodies, should not be educated and should not have their own businesses. The creative costumes, by Catherine Cosme, are indeed revealing, but all are in good taste and would be a highlight of any shop window on our high streets. The reluctant head mistress of the beleaguered college is wary, but not much of an obstacle as she is soon won over by the students’ enthusiasm.

From the clubbing scene at the start to the climactic fashion show Meddour builds Nedjima’s world through a series of incidents, obstacles, encounters and friendships. The students are all individualised, even if are chosen to represent a “type”. Maddour shows how the women bond – cavorting on the beach and splashing about in the water – even as they tear down new official posters around the city warning women to wear mandatory hijabs. Maddour also creates a subplot in which both Nedjima and Wassilia meet good looking, seemingly westernised young men: Mehdi (Yasmin Houicha) and Karim (Marwan Zeghbib).

We see how the romantic Wassilia falls under Karim’s influence, and the tension causes a rift in the women’s friendship. After a montage – one too many in the film – showing Mehdi and Nedjima enjoying a day out on the seashore, when dialogue reappears, we perceive that Mehdi is not as liberal as he first appears. Nedjima is unusual in that she does not want to flee to France, despite her talent in fashion, but wants to stay and help build a new Algiers, if not Algeria. Mehdi is taken aback when she does share his vision of their life together in Paris, raising a family.

Papicha’s weakness is that Meddour wants to squeeze as much as possible into this kaleidoscope of a young woman’s life during the Civil War. This gives the film the feeling of an issue-based docu-drama in which Meddour is ticking boxes, particularly as Nedjima does not grow or evolve during the course of the film. She seems to be the same defiant, determined, politicised, fun-loving, and compassionate leader among women at the beginning as at the end. Contrast this with the brilliant portrayal of rebellious, oppressed Turkish sisters in 2106’s Mustang.

The dramatic murder of Nedjima’s sister Linda (Meryem Medjkane) by an Islamist woman is a necessary plot point that triggers Nedjima’s resolve to stage the fashion show. There are other scenes, however, that are simply there to document the times, and are not worked into the narrative. In two instances, Islamic women in long robes storm the college like the Klu Klux Klan only in black, and, in the climax, a throng of male insurgents disrupt the women’s gathering with machine guns. Despite being sitting targets and defenceless, when the dust settles, the central characters are all alive and well. A naïve young, religious friend becomes pregnant, and is afraid of the consequences of her shame, although she is the happy bride at the fashion show and we never see the consequences of her shame. The boyfriends are introduced only to be revealed as traps to tame the wild young women.

It will be interesting to see what Maddour, who studied film and works in France, will do next. As for Lyna Khoudri, she is already hobnobbing with an international A-list of movie stars, including Benicio del Toro, Adrien Brody, Frances McDormand, Tilda Swinton and Timothée Chalamet in Wes Anderson’s upcoming comedy-drama, The French Dispatch.

You can read our review of Mustang by clicking here.