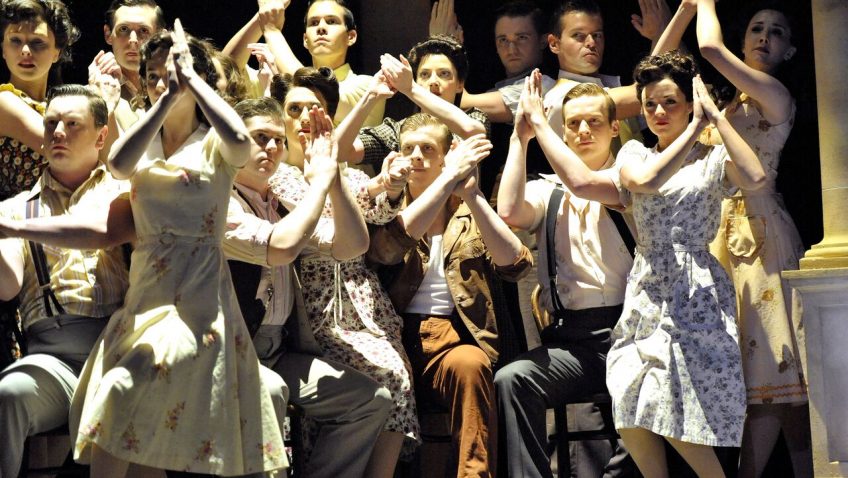 ‘Oh What a Show… !’  Evita exceeds all expectations

Bill Kenwright’s production of Tim Rice and Andrew Lloyd Webber’s iconic musical, Evita is thrilling audiences across the UK in a superb new tour of the show, which tells the story of Eva Peron’s rise from her working class roots to heights of extraordinary wealth and power. And if you’ve seen the show before, prepare to be surprised by the sheer energy and power of this new production.

The title role in this production is played by Emma Hatton and right from the beginning she inhabits the character with a fearless energy that clearly shows Evita’s ruthless determination to succeed. Her vocals are excellent, with the influence of her background as a jazz singer bringing a freshness to the delivery, and her tone, particularly in the higher register, is beautifully bell-like.

Appearing alongside Hatton is leading Italian performer Gian Marco Schiaretti, making his UK debut in the role of Che – a role he delivers with authentic Latin seductiveness and vocals that are equal to those of his leading lady.

Argentinean President Juan Perón is played with superb gravitas and just a hint of menace by Kevin Stephen-Jones whose classically trained baritone is perfect for the role. The superb Oscar Balmaseda as Magaldi and Sarah O’Connor as a beautifully poignant Mistress are other stand-out roles in a superb cast, and, importantly (but so often overlooked) the whole cast paid good attention to their diction  – this is a production where you really can hear every single word!

As well as stunning vocal performances, what really elevates this production is Bill Deamer’s outstanding choreography executed with breathtaking precision by the ensemble. Set against Matthew Wright’s beautifully lit set this production really is one not to miss.

Evita is at the Bristol Hippodrome until Saturday 18th February 2017.