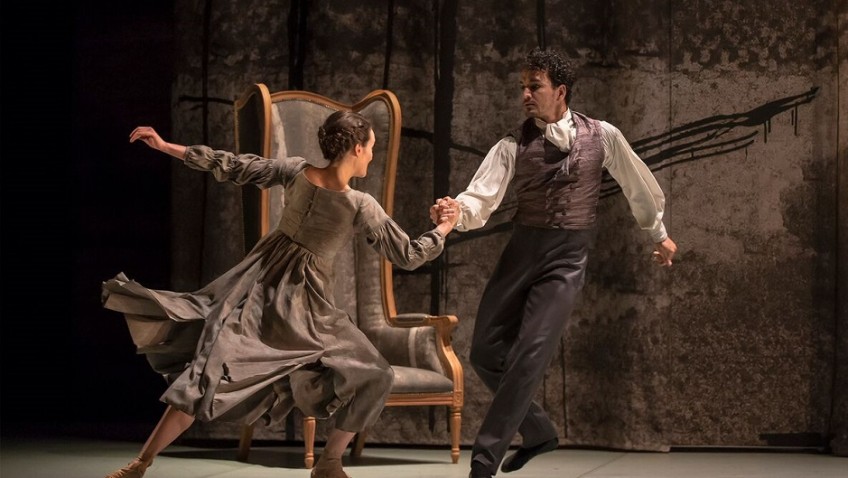 Northern Ballet, voted Europe’s Best Dance Company of 2014 and renowned far and wide for their special artistic magic, have done it again. In their sell-out World Premiere at Doncaster CAST, ninety minutes of entrancing dance bring with them ninety minutes of compelling drama, all excitingly underpinned by ninety minutes of superb music. Jane Eyre now joins the company’s expanding repertoire of glorious literary sensations like A Christmas Carol, 1984 and Wuthering Heights that sit alongside the likes of Madame Butterfly, Swan Lake and Cinderella. A fine present indeed for Charlotte Bronte’s 200th birthday!

As ever, expressive acting and dance skills, plus a superbly integrated score combine to sweep the powerful narrative along with unflagging flow and momentum as the characters spring convincingly to life on stage. Alastair West’s lighting and Patrick Kinmonth’s set, all moody, broody browns and gritty greys, evoke a lonely vastness of moorland, while moveable segments in the same subdued hues, are strategically repositioned to represent dark interiors with the addition of just the odd chair. Costumes echo the drama’s mood with greys, browns and blacks, lifted to brightness most notably by little Adele’s rose pink dress and the fiery red of mad Bertha’s. Flames and white mists just wait their chance, of course, to fill the stage.

The young orphaned Jane is danced sensitively by Antoinette Brooks-Daw as, ill treated by her cold-hearted, black-clad aunt, she’s packed off to the cruel, dark confines of Lowood, where Cathy Marston’s synchronised, regimented choreography of school life (- with echoes of 1984?) contrast with the tender dance of Jane and the dying Helen Burns. As the older Jane, Dreda Blow has a whole lot more dancing to do, much of it with Javier Torres as a mighty fine, brooding, world-weary Rochester. They dance their various pas de deux beautifully together. As their romantic reluctance eventually changes from choreographed conflict, struggle and torment and blossoms into tender love, their expressive interaction is thoroughly absorbing and engaging.

The intense, dark narrative is injected with a little light-footed humour by the accomplished Pippa Moore as a scuttling, slightly comic Mrs Fairfax, while lively childhood exuberance comes from Rachael Gillespie as playful Adele. Abigail Prudames dances a sophisticated, self-seeking Blanche Ingram, Jeremy Curnier a more emotionally detached St John Rivers, while Victoria Sibson has a fine, menacing presence as the incarcerated, demented, barefoot Bertha, her scary shadow dancing spiky and mad as the flames roar. An ensemble of half a dozen grey-clad males appears to dance with Jane like harbingers of doom and destruction at times of death and desolation, a concept that works well to heighten the mood of tension and upheaval.

Composer Philip Feeney’s score is another tremendous triumph, a super creation, while the musicians, under the baton of John Pryce-Jones, do both composer and company proud. Skilfully, brilliantly, Feeney has compiled, arranged and blended together compositions of his own with those of other composers, Schubert and Mendelssohn, for example, and – most aptly – Mrs Fanny Mendelssohn, who, like the Brontes, was a female artistic powerhouse of the time. The resultant richly textured, exciting music works seamlessly to enhance mood and choreography all the way, travelling from heart-swelling melodious harmonies of a more traditional classical sound to more contemporary agitated, hastening, disturbing styles with harsh, grating discords and spiky rhythms. Piano, horn, strings and woodwind come to the fore in turn, providing magnificent auditory treats throughout.

Impact, innovation, excellence. For any fan of the Jane Eyre story, this is a piece of exhilarating theatre, not to be missed.

From Doncaster, the production makes its first tour to Richmond, Aylesbury, Wolverhampton, Stoke and Leicester.