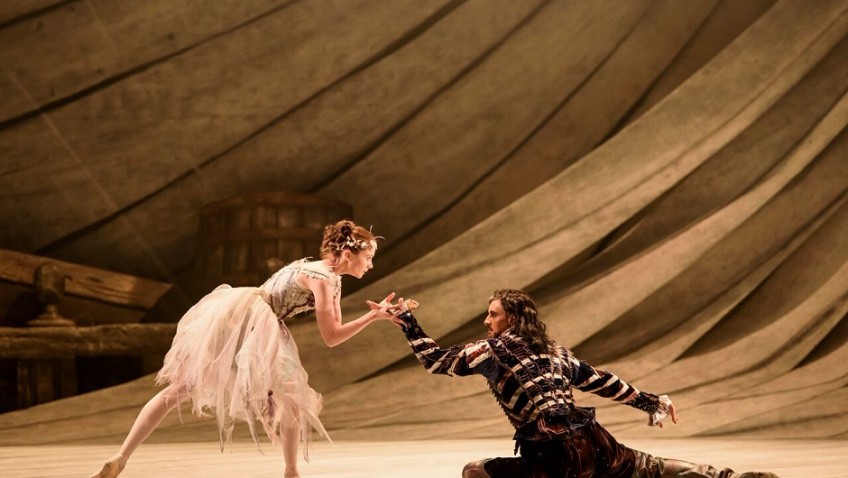 There have been more of The Tempest ballets than you might think. And the good news is that Shakespeare without words means you don’t have to listen to Prospero’s opening exposition to Miranda, one of the most boring speeches in all Shakespeare.

Shakespeare’s play, with its storm at sea, sprites, masque, magic and enchantment, has infinite possibilities and should be ideal for a strange and wondrous ballet. The island is full of sounds and sweet airs that give delight.

There was a spectacular production by Edmund Kean in 1857 which I unfortunately missed.

David Bintley’s version for Birmingham Royal Ballet, with music by Sally Beamish, follows Shakespeare pretty closely, scene by scene; but, except, for the opening storm (with good use of silks) doesn’t really bring anything special to it. It’s all very superficial

Things pick up in the second act when there are more opportunities for ballet. The banquet scene, which includes a flashback to Milan and Prospero’s arrest and usurpation, has possibilities. The 20-minute Masque brings out the closet Busby Berkeley in Prospero. A goddess making her entrance on a rigidly wooden flying peacock is pure kitsch.

And even more could have been made of the wolves rounding up the cast for the finale.

Iain Mackay’s Prospero is on the young side and he doesn’t look as if he could bedim the sun and call forth the mutinous winds.

For 200 years Ariel was a role for women. Feminists will no doubt be soon reclaiming the sprite for themselves. Here Ariel is so androgynous that I had to check the programme to find out the sex.

Brandon Lawrence’s Caliban (no fishy monster, he) is such a handsome chap he comes across as an ideal mate for Yaoqian Shang’s Miranda.

The ballet ends with Prospero handing his crown to Caliban. But the revels are by no means ended. Au contraire. There is still the curtain call and the curtain call is such fun, such a crowd pleaser, that many people will leave the theatre, thinking it was the best thing of the evening.