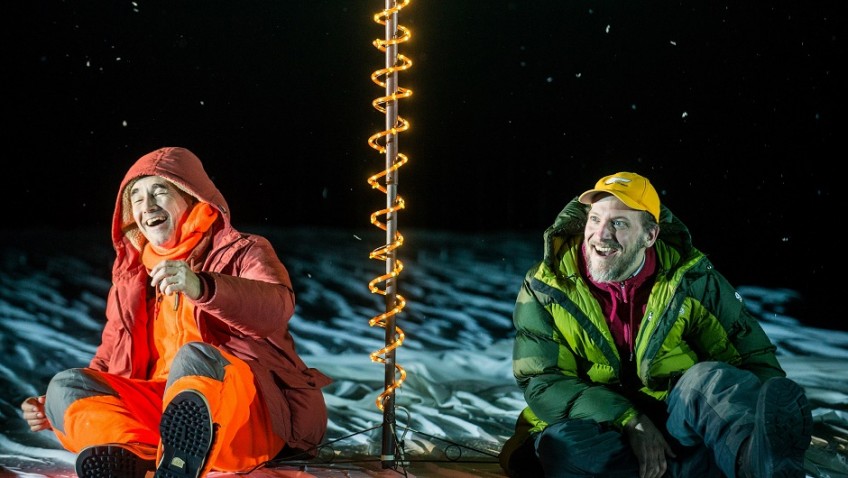 Mark Rylance goes from success to success: Jerusalem on stage, Wolf Hall on TV and Bridge of Spies and The BFG on film. 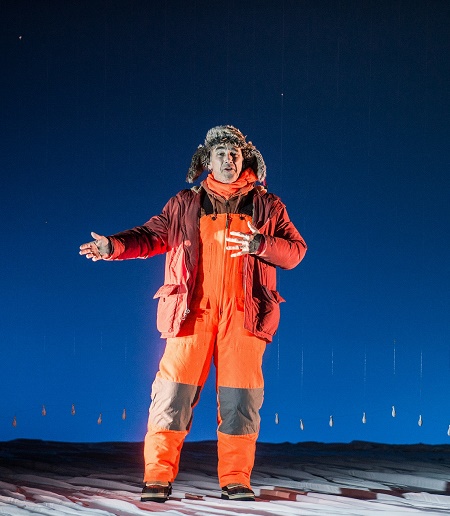 At the Tony Awards he delivered a prose poem by Louis Jenkins instead of making an acceptance speech. Rylance and Jenkins have now got together to write a play

Two anglers sit on a frozen lake in Minnesota, fishing, chatting, philosophising. They are visited by an environment enforcement officer, another fisherman and a girl

“What is the play about?” he asks in a programme essay and answers his own question: “I don’t know.”

Nice Fish focuses on the life work of the now 74-year-old poet. It’s not a play; it’s a collection of monologues and duologues. But it’s not a revue; it’s a quilt of prose poems and black-outs.

It’s humorous, it’s oddball, it’s eccentric, it’s absurdist and it’s fishy. It could be stand-up. Bits are funny. But lots of it is not funny and boring.

Rylance and Jim Lichtscheidl initially rehearsed it in situ on the frozen Lake Silver.

Lichtscheidl’s chief role is to sit there with his dark glasses and look gobsmacked and bored stiff whilst Rylance is rabbiting on in a whimsical manner.

At the end the two actors throw off all their clothes, except for their underwear, and assume the identity of a very elderly couple of theatregoers who have just seen Nice Fish and didn’t like it all. Their critique is spot on.

The 90-minute play is directed by Claire Van Kampen, Rylance’s wife. The bleak winter landscape set, with ice as far as you can see, and way, way in the distance, tiny trees and tiny cars, would do very nicely for Gogo and Didi.

Arrive at the theatre 6.00 pm (or 1.30pm matinee days) dressed either as a fish or in fisherman gear with rod and you could get free tickets.