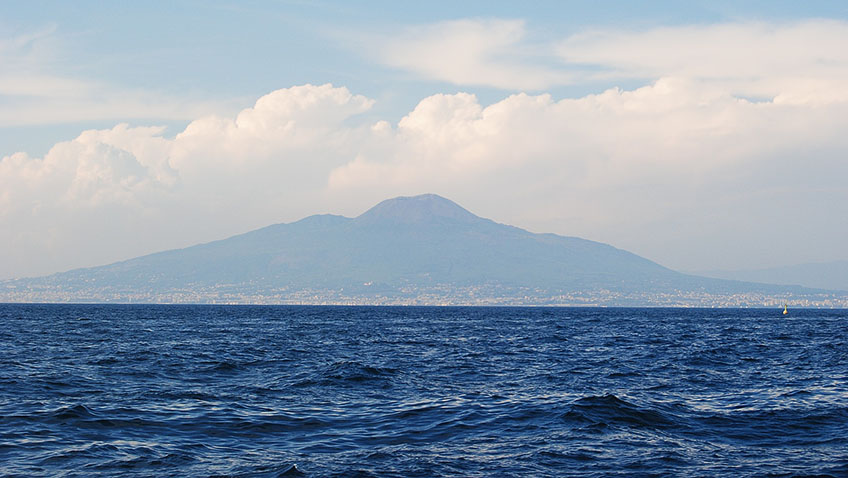 For most of us Mount Vesuvius is synonymous with the deadly eruption of AD75 that destroyed numerous Roman settlements, most famously Pompeii and Herculaneum, and killed an estimated 30,000 people. But since them the volcano has erupted 30 times; most recently during WW2, in March 1944.

Seventy-five years ago this month the residents of San Sebastiano, a coastal Neapolitan town on the slopes of Mount Vesuvius, had endured over four years of war with invasion, occupation and bombing. On 17th March Mount Vesuvius started to erupt; large rocks, some the size of footballs, rained down and some areas were covered in almost a meter of ash. A slow-moving wall of volcanic rock, lava and debris advanced down the mountain, crushing and burning everything in its path. There were loud rumblings underground and the ground shook.

Allied soldiers helped the residents of San Sebastiano load their possessions onto carts and wagons so they could be evacuated. Eventually the lava flow slowly smashed through San Sebastiano and other neighbouring villages. Remarkably despite the chaos, destruction and confusion, the director of the Royal Vesuvius Observatory managed to continue making observations throughout the eruption.

The volcanic eruption claimed 26 lives and an estimated 12,000 people were displaced. Most of the fatalities were near Salerno where heavy ash fall collapsed roofs; falling volcanic rock killed three in Terzigno; and in San Sebastiano hot ash boiled the water in a tank, which exploded, killing two children.

Although there has been no activity observed since the 1944 eruption, living with a sleeping giant is hazardous. In May 1988 thirty hours of persistent heavy rain caused a flow of ash from previous eruptions, killing 150 people.

Vesuvius is without doubt one of the longest studied volcanoes in the world and is constantly monitored. There are an estimated 3 million people who live within 20 miles of the volcano and it’s slopes and the city of Naples is a mere 7.5 miles away, a distance that could be covered by a pyroclastic flow in less than 3 minutes. This is Europe’s largest active volcano; many volcanologists expect that an eruption could well be sooner rather than later and that it could be cataclysmic. The Italian Government has a comprehensive emergency plan; estimating that in the worse case scenario approximately 600,000 people would need to be evacuated, an exercise that would take approximately 2 weeks. Monitoring technology is designed to provide early warnings of any imminent eruptions to allow enough time for evacuation plans to be put in place.

The area around Vesuvius was officially declared a national park in 1995, and so if your in the area on holiday and fancy getting a closer look at this sleeping giant, the summit is open to visitors. There are a small network of paths around the volcano that are maintained by the park authorities and there is an access by road to within 200 metres of the summit, but it’s access on foot thereafter. But don’t be under any illusions; this is an active volcano and definitely no theme park. You will need to be prepared with good stout walking boots and waterproof jackets. For more information on visiting Mount Vesuvius National Park please visit: www.parks.it/parco.nazionale.vesuvio/Eindex.php