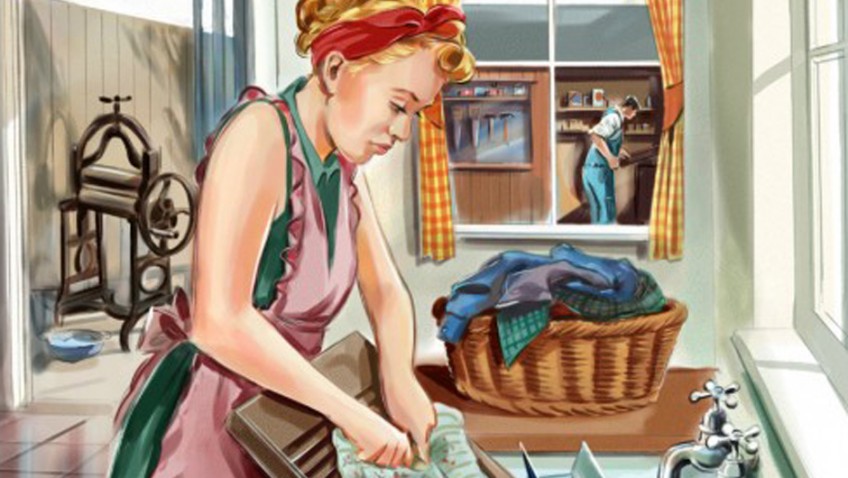 Next time you sigh as you prepare to tackle the laundry, spare a thought for the housewife of the 1950s – who spent an astonishing 57 hours a week on chores.

Thanks to modern technology, our average domestic cleaning routine is now only two hours a week, according to a survey of 2,000 UK adults by Currys PC World.

But 50 years ago it was more than a full-time job, with women – and it was almost exclusively

women at the time – toiling away for over 11 hours a day through the week on house-keeping.

The electrical giant teamed up with social historian Seren Evans-Charrington to compare the two generations’ workloads.

In the 50s, housewives, who did the lion’s share of the chores, spent 42 hours a week doing general housework, plus a further 15-20 hours ‘deep cleaning’ such as cleaning brass or silverware.

In comparison, according to the study, we’re now a nation of ‘quick fixers’, shunning hours spent on cleaning in place of daily tidying.

Evans-Charrington said that although items like vacuum cleaners were available to some families in the 50s, it could still take four hours to clean due to their clumsy builds, while ironing two baskets of laundry could take up to six hours.

Another stark contrast is the changing roles of men and women in the division of household tasks. While they were almost exclusively left to women in the 1950s, a third of households now split chores equally.

Evans-Charrington said: “Modern day households are not under the same pressure that our parents’ generations were, where the idea of an immaculate household was a social status symbol.

“Now, not only are the everyday tasks like washing dishes and doing laundry done in a fraction of the time, we also share more responsibilities and have generally reduced the amount of tasks we do to encompass only the very basic of chores.” She said: “As part of my 1950’s household chores experiment I spent a day hand-washing with soap flakes in a washtub and it took me seven hours.

“With a washing machine the same task amounted to two loads in the washing machine and on a 40 degree wash it took two and a half hours but my physical input was just 20 minutes.

“After drying the washing overnight by the fire due to wet weather conditions I then spent the next night ironing with an electric iron from the 1950s, which was much heavier and harder to use.

“Because it did not have the built-in steam mechanism of modern irons it also took longer to get the creases out of items.

“Presented with two baskets of laundry, I ironed one using a standard modern steam iron and the other using a 1950s corded iron. With the modern iron it took me just two hours to get through the first washing basket, but five hours for the other load.

“Using a 1950s Electrolux vacuum, I vacuumed the rooms in my house but it was much harder to push than my modern day equivalent. The pick-up was nowhere near as effective and I really had to work at getting the carpets clean rather than a quick whizz around.

“With a modern vacuum it took me just under two hours to clean two reception rooms, stairs, landing, hallway and three bedrooms and the same task using an old appliance took me three and a half hours.”

Jennifer Bergh, of Currys PC World, said: “With the increasing busyness of our lives, it’s no surprise most modern cohabitating couples are making the most of modern tech wherever possible to help keep their household in order.

“Gone are the days when we spent all of our time juggling various chores – now, with modern appliances ranging from Dyson high speed vacuum cleaners to integrated washer dryers, we can have tedious tasks like our laundry done with the click of a button.

“And it seems the evolution of tech is not set to end there – who knows how cleaning will look in ten years’ time with the increasing popularity of cleaning robots and tech that can be set remotely?”

How has technology transformed housework for you?  Do you remember what it was like in the 1950s? Ed.