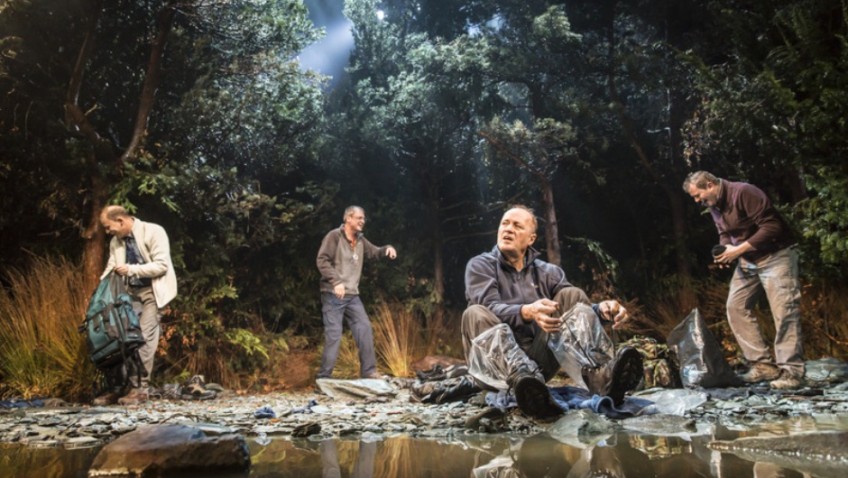 Tim Firth’s play, last seen in the West End twenty years ago, has been likened to Alan Ayckbourn, but Neville’s Island is potentially much nearer to John Boorman’s film, Deliverance. The comedy, difficult to pitch correctly, gets darker the longer it goes on.

A firm has sent its middle-aged middle-management on a weekend team-building exercise in the Lake District. One team’s boat sinks and the men have to swim ashore. They find themselves stranded on a waterlogged, heavily wooded island in the pouring rain.

The question is how long it will take for them to be rescued?  The crisis doesn’t bring out the best in them. The four men’s characters are tested and found wanting.

Adrian Edmondson is cast as a very nasty and very tiresome bully, whose one-note sarcasm gets on everybody’s nerves, including the audience’s. Miles Jupp carries a rucksack, which is ludicrously packed to the rim for every conceivable emergency.

Robert Webb plays a Christian ornithologist, who recently suffered a serious breakdown and has been off sick for over a year. He talks to the birds. Neil Morrissey, well-meaning and ineffectual, tries to keep the peace between them all.

The actors have the wettest entrance of any play I know; so wet they have to immediately strip, which is good for a laugh. But if you cast four actors, who are best known for their comedy skills on television, there is a danger that the audience is liable to arrive at the theatre thinking it is all a big laugh; they even find a man, who is obviously mentally deeply disturbed, funny.

That the first night audience was so insensitive was not the fault of Robert Webb whose own performance was most sensitive.