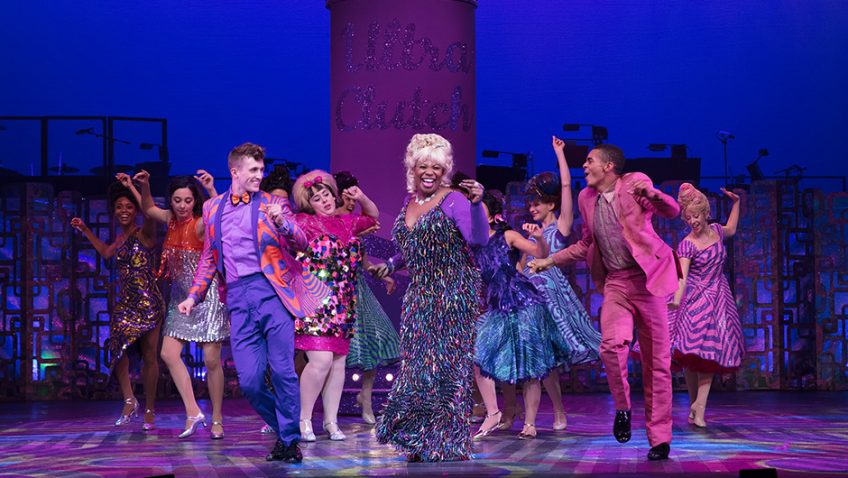 Hairspray the musical is touring the length and breadth of the UK and Ireland and has just opened at The Bristol Hippodrome. It is vibrant, energetic and uplifting and a wonderful way to cheer the soul on a winter evening. With colourful costumes, spectacular dance moves and upbeat, sing-a-long songs you are guaranteed to leave the theatre smiling, if not dancing!

Based on John Waters’ 1988 film, Hairspray the musical takes place in 1960s Baltimore and centres around the character of fun-loving, overweight teen, Tracy Turnblad. While the plot is hung on Tracy and her dreams of becoming a dancer on The Corny Collins TV show, her story is set against the backdrop of racial segregation; when Tracy lands a role dancing on the how, she uses her new-found fame to fight for integration of black and white dancers on TV.

While the production skilfully explores thought-provoking and powerful messages regarding race, bullying and weight, it manages to maintain a positive and buoyant air and is thoroughly entertaining from start to finish.

Rebecca Mendoza makes her professional debut in the lead role of Tracy Turnblad, though you wouldn’t know she is such a recent drama school graduate! She has a powerful voice, confident dance moves and is utterly convincing as bubbly, adoring and determined Tracy. Her opening number, Good Morning Baltimore, had everyone hooked and she continued to lead the cast and audience through the rest of the show’s lively twists and turns.

Tracy’s parents, Edna and Wilbur, are played by Matt Rixon and Norman Pace, respectively. They are the perfect comedy duo and had the audience roaring with laughter with their cleverly delivered innuendos and some seemingly off-the-cuff exchanges. The part of Edna is traditionally played by a man in drag and Rixon took this on with resounding success.

Layton Williams was impressive and charismatic in his role of Seaweed, a young dancer who Tracy met in detention. His awe-inspiring dance moves and gymnastic back-flips were perfectly executed and captivating throughout the show. Layton began his career at the age of 12 when he secured the title role of Billy in London’s Billy Elliot. He has since had numerous other successes in both theatre and TV.

There were equally spectacular performances from the rest of the cast, including Gina Murray as Velma Von Tussle, Jon Tsouris as Corny Collins and Edward Chitticks as Link Larkin.

In all in, Hairspray is a spectacular, fresh, vivid and thoroughly enjoyable production; go and see it if you can!

Hairspray is on at The Bristol Hippodrome until Saturday 10th March and touring the UK and Ireland until August 2018. For more information, visit: www.hairsprayuktour.com/tour-dates