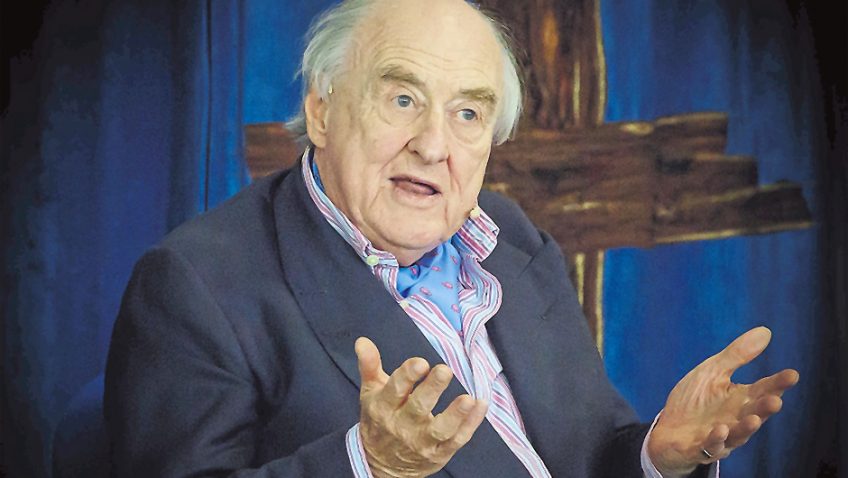 For over half a century, Henry Blofeld has conveyed his unfailing enthusiasm for the game of cricket as a much loved broadcaster and journalist.

His characteristic patrician tones, overlaid with those of the bon viveur, have delighted listeners to the BBC’s Test Match Special where the personality of the broadcaster comes second only to a deep knowledge of the game and its players.

With his engaging conversational tone it is easy to see why listeners feel as if they are actually at the Test match watching in Henry’s friendly company.

I spent a very entertaining hour in the company of “Blowers” listening to him talk of the early days of Test Match Special and hearing the stories of his antics with the other commentators.

His distinctive voice takes you back to the famous Test match grounds and he entertained us with his fond memories of commentary box antics.

One of my favourites was when the Queen visited the box at Lord’s and as tradition demanded she brought a cake. It was a large fruit cake soaked in royal brandy.

Jonathan Agnew asked if she had baked it herself to which she replied in the negative but that she had kept close supervision.

No mean cricketer himself, Henry modestly admitted to a good week at the crease in 1958 but was run over by a bus and had to content himself with painting the picture of matches with his radio commentaries, which was possibly a more difficult task.

It was a privilege to meet the man and let that mellifluous voice bring back memories of the action from so many matches over the years. Asked about his favourite Test he admitted it was Headingly in 1981 when a miracle happened, and we beat the Australians by 16 runs.

Henry began writing about cricket, for The Times, in May 1962 and in 1972 he started his long career as a commentator with the BBC’s Test Match Special.

During his career he has written for numerous papers and broadcast for both radio and television for many networks around the world especially in Australia and New Zealand. Between 1991 and 1993 he joined Sky Television before returning to Test Match Special after the death of Brian Johnston early in 1994.

Since 2002 Henry Blofeld has performed in his humorous one-man show in theatres all round the country, and later he teamed up with his former TMS producer, Peter Baxter, for more than 250 two-man shows.

Now that ‘Blowers’ has decided to declare his TMS innings closed, his book reveals the secrets of life in the commentary box and of the rich cast of characters with whom he shared it, from the early days of John Arlott and Brian Johnson to Aggers and new boys Boycott, Swann, Vaughan and Tuffers.

Henry is equally revealing of his own performances and self-deprecatingly recalls his several verbal misfortunes while live broadcasting.

Like the greatest commentators and writers on the game Blofeld has always understood that there is a world beyond the cricket field.

Not forgetting pigeons passing, red buses and much-loved cricket grounds, Henry Blofeld writes of his favourite countries, and experiences while travelling, and meeting and interviewing many cricket-loving celebrities. His passionate and entertaining book will become one of the classics of cricket’s literature.

His latest book Over and Out

, published by Hodder & Stoughton in mid October is out in hardback RRP £20 and we have five copies of the book to give away.