THE MARTIAN (20th Century Fox Home Entertainment). NASA astronaut is stranded on Mars and there is no transport to take him home for four years.  But how on earth will he survive? He keeps a video diary and talks to himself until he manages to contact NASA.

He grows potatoes. (Luckily, he’s a botanist and has ready access to manure.) He grows a beard. He doesn’t go out of his mind. He has no psychological problems.  He has a sense of humour and he’s played by Matt Damon.

I will say one thing: Matt Damon on Mars is far, far better than Robinson Crusoe on Mars. It’s still pretty silly. But at least there are no Aliens and no Man Friday. Ridley Scott directs. 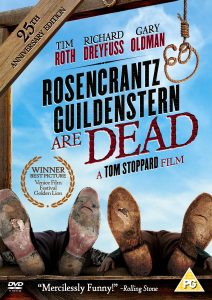 ROSENCRANTZ AND GUILDENSTERN ARE DEAD (RLJ entertainment) is the Tom Stoppard’s first play and the one (along with Arcadia) which is most likely to last. It premiered in 1966 at the National Theatre at the Old Vic. R & G (Tim Roth and Gary Oldham), two innocents, Hamlet’s best mates, are eavesdropping at the court of Elsinore and they haven’t a clue what is going on and never find out why they are killed.

Stoppard, who rewrote the play and directed it for the screen in 1990 is in love with the Becket Waiting-for-Godot rhythms and the word-play can be laboured. The Players with their dumb show, mime and puppets have a much bigger role on screen.

You can buy your copy of The Martian: