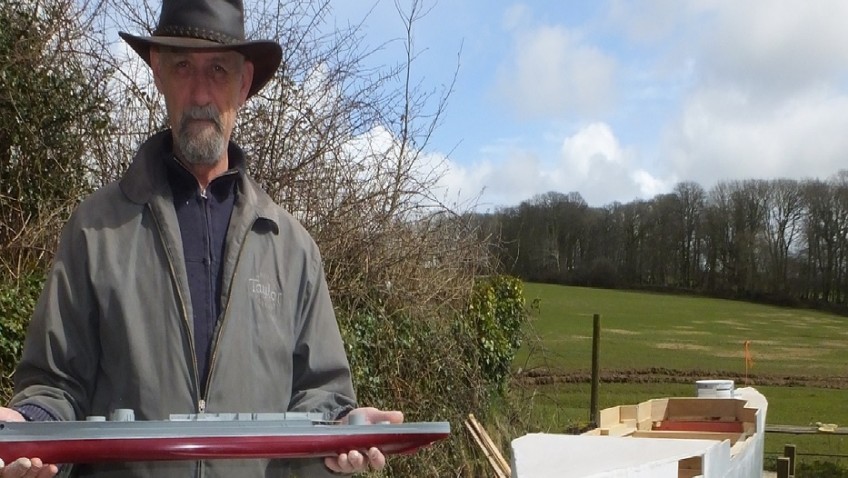 Marking the 75th anniversary since the HMS Hood sunk

A military buff is building a fully functional 25ft replica of a historic sunken battleship – in his GARDEN.

Martin Hall-Kenny wanted to take his passion for naval history to a new level and is creating boat to mark the 75th anniversary since the vessel HMS Hood sunk.

He has spent four months working on the boat already and has already created the hull. Work has now begun on detailing the vessel, with decking, turrets and living quarters – which will completely enclose himself and another passenger.

His version of HMS Hood will be piloted using a control panel and CCTV system built into the inside of the boat.

Martin, 60, a self-confessed big kid said he was only able to find the space to carry out hte project when he moved to a remote home in Arlington, Devon.

He said: “I’ve always had a fascination with ships but I always wanted one that I could actually sit in.

“But it wasn’t good enough just to build something for myself. I wanted it to have some meaning.”

Although technically a model, the boat will capable of carrying two people and will be piloted by Martin while he is hidden inside the hull of the vessel. He added: “People say it’s silly and that’s fine, because I’m the one who is going to be inside it and having a blast.

“The nice thing is there are no rules. There is no kit to work from.

“I had to plan it all out first, but there are things I have had to work out as I have gone along.”

To help successfully complete his project in time for the anniversary, Martin is appealing for help and is currently looking for an eight to 10 horsepower engine to power the boat.

by Tom Bevan and Peter Brown