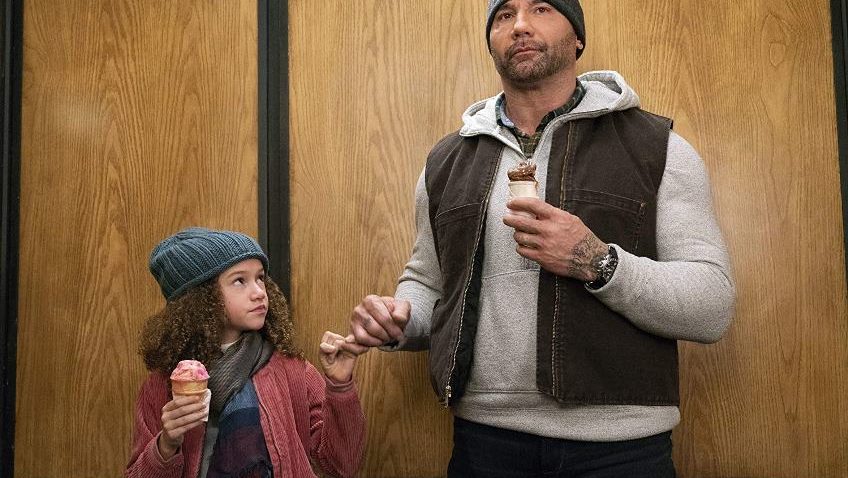 A hardened CIA agent has girl trouble in this fun, but predictable, cliched comedy.

From the title, the presence of former World Heavyweight Champion Dave Bautista and the poster, (a big, strong man with a scar on his face and a pretty little girl) you can expect My Spy to deliver fun, bitter-sweet sentiment, laughs, romance with the moppet’s mum and a threat from a villain so familiar it won’t even register. You will get all of the above, reader, but if you’ve seen Arnold Schwarzenegger in Kindergarten Cop, Vin Diesel in The Pacifier, Dwayne ‘The Rock’ Johnson in The Game, or Burt Reynolds in Cop and a Half, you’ll be expecting more. While none of My Spy’s predecessors are masterpieces, if filmmakers are going to make a formulaic genre comedy with a dominant déjà vu factor, they need a fresher, wittier script than Jon and Eric Hoeber (Battleship, The Meg) have come up with and a more imaginative take than director Peter Segal (Anger Management, The Nutty Professor) delivers.

The recipe calls for one gentle giant, who is a Dirty Harry-type headache for the CIA, to be relegated to Chicago for a damage-limitation assignment, while his better behaved and dressed colleagues are sent to exotic locations where the danger and the glory await them. Agent JJ Cena has the habit of taking out the bad guys before they can be questioned for vital evidence and his boss (Ken Jeong) gives him one last chance. His surname must be an in-joke reference to WWE champion-turned-film star (Daddy’s Home, Trainwreck, Sisters) John Cena.

All he has to do is spy on Kate Newton (Parisa Fitz-Henley) and her nine-year-old daughter Sophie (Chloe Coleman) from an apartment in their building in the unlikely event a criminal relative looking for a missing file, pays them a visit. The recipe then calls for the little girl to get under JJ’s skin and help him catch the bad guy.

And sure enough, JJ, a hardened loner with no room for women in his life, is soon surrounded by three females against whom he doesn’t stand a chance. The first is techno whizz Bobbi (Kristen Schaal) an adoring fan of those reckless exploits that have rendered JJ a liability to the department. She moves her computer surveillance equipment into the empty, dingy apartment expecting JJ to train her on the operative side, imaging the type of partnership that see saw in the prologue to True Lies. Bored in his demeaning assignment, JJ is not the best company and the two argue like an old married couple.

The other two females prove harder to resist. Having recently moved to Chicago from France, and friendless, as she is bullied at school, Sophie has a lot of time on her hands and is as bored as JJ. She soon discovers that her apartment is being bugged and by whom. JJ is suddenly open to blackmail and must meet Sophie’s endless demands or she’ll blow his cover and put him out of work.

And so, the fun begins as a beefy, deadly CIA agent in his late 40s finds himself at the mercy of a nine-year-old girl. Sophie’s first demand is that he teach her to be a spy. When Bobbi eventually gets wind of this, she not only resents it, but realises JJ is breaking protocol, and she will be implicated.

The demands do not end with the apprenticeship. When Kate, a nurse, has to work, an extra shift, it falls to JJ to take her ice-skating where she hopes to befriend some school mates. He wins over the entire class when Sophie, already conspicuous for not having a father, sends “special friend” JJ to the front of the class to talk about his profession.

JJ is a big hit and when Sophie’s smitten teacher sniffs around after class, slipping JJ her phone number, Sophie intervenes. She is saving JJ for her attractive mother, so grateful to JJ for all that he’s done for her daughter’s morale. Just why Kate doesn’t ask the police if he’s on their list of relocated child molesters is another matter.

Bautista is as good as any of the former pro wrestlers and body builders who appear in these films at showing his vulnerable side, but he is perhaps unique in allowing this side it to take over. A woman or a cute kid can soften Dwayne Johnson, but he never allows himself to be the bungling loser that Bautista manages so convincingly. It is also wishful thinking that the school mums would grow weak in the knees at the sight of this hulk, best known as Drax the Destroyer in the Marvel Superhero films Guardians of the Galaxy Vol. 2 (2017), Avengers: Infinity War (2018), and Avengers: Endgame (2019).

When the villains finally arrive, there is not much tension as the domestic family comedy tone that has dominated the film is never dispelled. Sophie, who dresses like a model, is so annoying precocious, manipulative and resourceful that we cannot imagine her being in danger for long. But we need her to appear to be in danger so that JJ can claw back the respect he’s lost and finally demonstrate his worth.

What is unique about My Spy is the chalk-and-cheese buddy relationship between Bobbi and JJ. Bobbi is a refreshing female sidekick and Segal maintains the tension between them and resists the bonding until the very end. When the film ends with a well-judged demand for equal pay, it becomes clear that Bobbi and JJ are a perfect team.