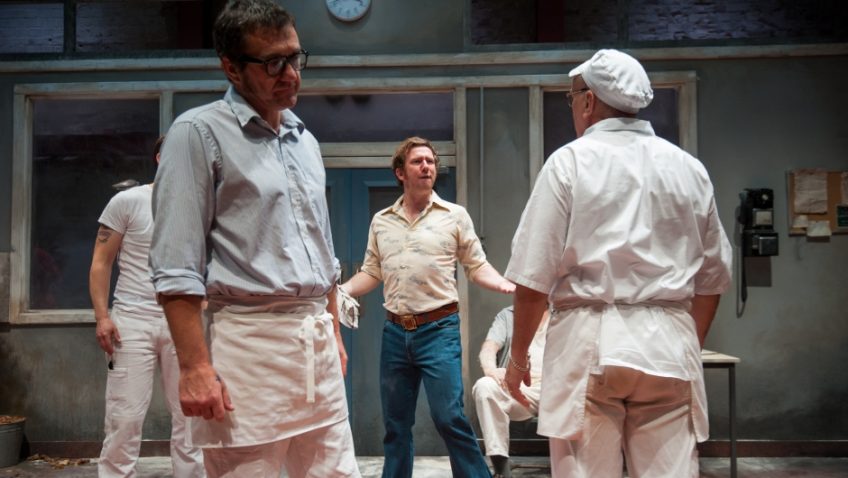 Man does not live by bread alone. He needs dough

Richard Bean’s first play, a sad and funny slice of working-class life, was based on his gap year experience whilst working in a mass production bread plant in Hull in 1974 when he was eighteen. Eleanor Rhode’s production is its first London revival since its premiere at the Royal Court Upstairs in 1999.

The setting is the filthy canteen of a bread factory whose days are numbered. The hourly paid, badly paid, wage labourers working late until 11 and 3 in the morning in dirty, greasy, hot and dangerous conditions.

They had gone on strike and are now earning less than they did before. “I don’t feel nowt special anymore,” says the youngest (Finlay Robertson) who had had a more rewarding life as a trawlerman.

The run-down oven jams on a night shift. Is it an accident? Or is it a deliberate act of sabotage by the boss to close the factory and relocate in modern premises in Bradford? Either way, they are liable to lose their dead-end jobs. Can they fix the oven without the boss finding out and bake an order for 3,000 loaves on time?  Or are they toast?

They cannot afford to lose their dead-end jobs. Matt Sutton, speaking for them all, has a desperate outburst: “D’yer think I like coming here on a Sunday?… I ain’t got no choice.” There’s no other work out there for the unskilled. Matthew Kelly, as the oldest, as lumpen as dough, started in the bakery at 14 and has been in the same boring job for the last 40 years.