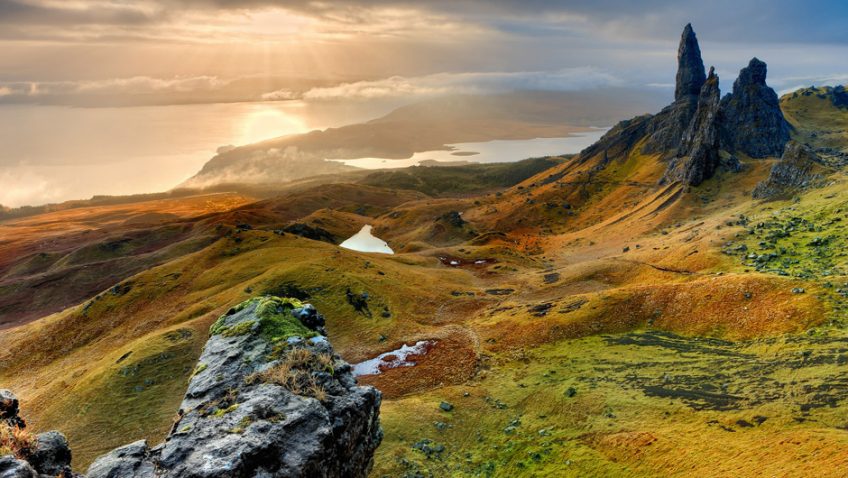 Scenic Scotland is a delight

We all know that the UK has some of the best scenery and places to visit in the world, and none more so than Scotland. With its great areas of rugged mountain wilderness, its magnificent glacial glens and sea lochs, and a landscape that was violently formed from colliding continents, erupting volcanoes and moving ice sheets. For its size, Scotland is said to have the most varied and natural geology of any country in the World.

And that’s before we even get anywhere near the long, fascinating, and often quite savage history of its people, of the invaders who came to conquer, of the monarchy and their warrior royals and of the rich history of its clansmen and women. Or before we even consider what they left behind; the ancient standing stones that we still don’t fully understand, its many fine castles and lavish stately homes, its striking architecture, derelict fortresses and battle scarred history.

With everything that entails how can you possibly hope to see it all in one visit: the simple answer is you can’t. Both time and the distances involved make it a challenge that would beat even the most seasoned traveller. However, there is a way.

The honest answer is that to see all that Scotland has to offer you would need several separate visits. For some, that might be an option, if time and money allow, but for many it’s something that can’t be countenanced. This is where a cruise may be the answer, which is exactly how I experienced many delights over seven days on a Lochs of Scotland itinerary courtesy of Fred. Olsen Cruise Lines.

Sailing on the MV Black Watch, the smallest ship in the Fred. Olsen fleet, we left the port of Rosyth, just north of Edinburgh, heading overnight for our first stop, Kirkwall the capital of the Orkney Islands, and islands is the right word, there are over 70 of them, many uninhabited.

The town traces its history back to the 11th Century when it was called Kirkjuvagr, the church of the bay, and it was granted Royal Burgh status by James III in 1486. It is also home to the stunning St Magus Cathedral, known as The Light of the North, and the Earl’s and Bishop’s palaces, both of which have a bloody history. Kirkwall, as a town, is very easy to navigate on foot. For those wishing to travel further afield a visit to some of the many ancient settlements such as Skara Brae, stone circles like the Stones of Stenness and the Ring of Brodgar, and tombs such as Maes Howe, all of which have been given UNESCO World Heritage Status, is a must.

I must say I was sad to leave Kirkwall. I would quite happily have spent more time exploring, but Invergordon, a small town that serves as the gateway to Loch Ness and the Northern Highlands, beckoned. A tour of the famous Loch is well worthwhile, or if history is your thing then a visit to one of the many castles in the area may well interest you. These include the historic ruins of Urquhart Castle overlooking Loch Ness itself, the largest house in the Highlands, Grand Dunrobin Castle and the picturesque Cawdor Castle.

Another overnight sailing saw us awake the next morning to the delights of Ullapool, a pretty fishing village located on the shores of Lochbroom. The village and port came into being as a result of the British Fisheries Society commissioning the great Scottish engineer, Thomas Telford, to design it way back in 1788. Telford was known for his great engineering projects and in particular his road building skills which led to him acquiring the nickname ‘The Colossus of Roads’. Nowadays, the village is a tourist centre giving access to some of the most stunning scenery in the Northern Highlands. A must see is the magnificent Corrieshalloch Gorge and the Falls of Measach which plummet vertically some 200 feet into the dark chasm below, alternatively, a walk round the pretty town itself is just as rewarding.

Next stop was Fort William, known as the ‘Outdoor Capital of the UK’ given its proximity to the mountains and wilderness that surround it and sitting in the shadow of the UK’s highest mountain, Ben Nevis which, on the day of our visit, was sadly shrouded in cloud – it clearly didn’t want to be seen!

Fort ‘Bill’, as the locals call it, isn’t just about the mountain though, there’s plenty more to see and do whether that’s walking along the shores of Loch Linnie, taking a coach ride through Glencoe, Scotland’s most famous glen or step back in time by taking the Jacobite steam train across the famous Glenfinnan Viaduct with its 21 magnificent arches. Glenfinnan was where Bonnie Prince Charlie came ashore to stake his claim for the throne of Great Britain and where the final Jacobite rising was born. The rising ended in his bloody defeat on the battlefield of Culloden in 1746. This really is a beautiful place, you can feel the history everywhere you go, but it wasn’t my favourite destination on the cruise; this was yet to come as we set sail for our final destination, Portree on the Isle of Skye, the largest of the Inner Hebridean islands. Portree means ‘The Port of the King’ and was so named after a visit from King James V in 1540 and from the minute you land on the island to the minute you leave, you can feel that Skye is different from all the other places that you have visited. An island some 50 miles long and the same distance wide, it is nevertheless defined by the sea which is everywhere given the number of sea lochs that cut into the island, by its landscape, by its weather, by the feeling of remoteness and of course by the broody Cuillin Mountains. Just a drive around the island is enough to witness the spectacular scenery.

By the time we left Portree to cruise around the north of Scotland back to Rosyth we had a real feel for the rugged and the wild Scotland, its scenic beauty, and for the sheer remoteness of the places we visited.

It is amazing how quickly seven days can pass, but with a varied itinerary like this one it’s seven days that you don’t want to end. The cruise is made all the more pleasant by the fact that Black Watch, in cruise terms, is a relatively small ship carrying a maximum of just over 800 passengers. While on board you are looked after superbly by well trained staff whose priority is clearly your safety and enjoyment of your holiday. The staff are a credit to the ship and to Fred. Olsen and they help make a very enjoyable cruise even more so.

A similar cruise with Fred. Olsen Cruise Lines will be a seven-night ‘Lochs of Scotland’ cruise (W1811) on board Black Watch, departing from Liverpool on 11th June 2018.

Ports of call include: cruising Loch Fyne and Loch Linnhe, calling at Fort William, cruising by Duart Castle, and cruising the Sound of Mull. Black Watch then calls at Stornoway, Invergordon and Kirkwall, cruising Loch Dunvegan before returning to Liverpool on 18th June 2018.

For further information on Fred. Olsen Cruise Lines, visit the website at www.fredolsencruises.com or call Reservations on 0800 0355 242