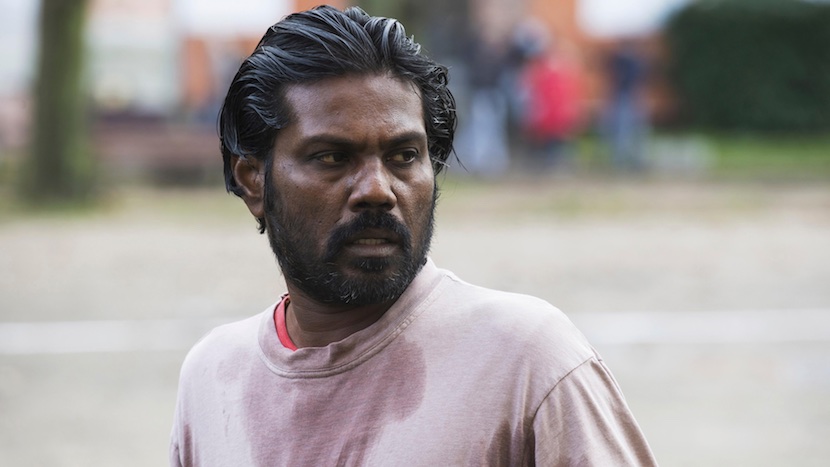 It lacks the subtle perfection of A Prophet, but Jacques Audiard’s Dheepan tells a powerful, topical story about integration

After winning the Grand Prix at Cannes in 2009 for A Prophet, script writer-turned-writer/director Jacques Audiard’s seventh film as director, Dheepan, was the surprise winner of the prestigious Palme D’Or at this year’s Cannes Film Festival.  If it was a ‘surprise’ win it is because, engrossing and impressive as it is, Dheepan is probably not Jacques Audiard’s best film.  It is, nonetheless easy to see why the jury (led by the Coen Brothers) would respond to this powerful, topical and humane story of a makeshift family of asylum seekers thrown into a new kind of hell in a French housing estate.  The depiction of three Sri Lankans  attempting to integrate into French society is all the more authentic for its lead actor, Anthonythasan Jesuthasan, a former Tamil Tiger child soldier, whose real story is as harrowing as his character’s in the film.

Sivadhasan was a child soldier who became a feared killer for the Liberation Tigers of Tamil Eelam in the long and bloody Civil War with the majority ethnic group, the Sinhalese.  On the losing side when the government forces win the war in May 2009, he is forced into a chaotic and overcrowded refugee camp. To stand a chance of gaining political asylum in France, he is told he needs a passport and a convincing cover story.  No one must know of his past. Sivadhasan is eventually given the passport of a 36-year-old dead man named Dheepan.  He is also given a fake wife, Yalini (Kalieaswari Srinivasan in a stellar film debut), a single woman who is nearly caught when an official becomes suspicious of the age on her passport. A 9-year-old orphan, Illayaal (Claudine Vinasihamby) must learn to play the role of their daughter if she wants to leave the camp.  Dheepan asks officials if they will go to England, and is told they will go France.

After trying to make a few Euros selling trinkets on the street, Dheepan, as he is now called, lands a job as a caretaker for a large housing estate in Le Pré Saint –Gervais, a suburb of Paris.  Le Pré means ‘meadow’ in French, but the only nature in the densely populated concrete jungle is the derivatives of coca plants and poppies.  A man named Youssouf (Marc Zinga) shows Dheepan around.  A crowd of skin-heads congregate inside one particular tower block.  Dheepan is told not to clean there between 7 and 11. The arsenal of weapons stored in the building must remind Dheepan of what he left behind.

While Dheepan’s hard work and efficiency win the respect of the tenants, Yalini is having a harder time, doing menial jobs and unable to speak French.  Nor is she able to feel any warmth toward her foster family, a situation Dheepan fears will be noticeable.  Illayaal desperately needs love and stability and gradually, she begins to find her roots in school, becoming fluent in French and making friends.

In one touching scene Yalini admits to Illayaal that she does not know how to act around children, never having had any children of her own or sisters.  Illayaal asks if she were nice to her two brothers, and Yalini answers, ‘yes’

‘Well, be the same with me,’ the wise young girl suggests.

When Youssouf offers Yalini a relatively well paid job as a part-time carer for an old man named Mr Habib (Faouzi Bensaidi) in the off-limits tower block, she is reluctant to accept it.  She is nervous as she is told to knock on the door to an adjacent room before leaving every day.  Mr Habib’s relative, or associate, a good looking young man named Brahim (Vincent Rottiers) is one of the men in the room that cannot be entered without knocking.

Yalini offers Brahim some of the lunch she has prepared for Mr Habib.  The young man loves her cooking and tips her. Gradually they forge a kind of platonic relationship through broken French and sign language, both wishing it could become something more.   She notices a tag on his leg and Brahim must find it refreshing that Yalini does not know what it is.  She tells Brahim, who is concerned about Dheepan’s vigilante actions on the estate,  that her husband is a good man – it was the war that made him a bit crazy.

Gradually, the arguments between Dheepan and Yalini wane, and they consummate their fake marriage in an attempt to make it real.  Through it all, though, Yalini threatens to leave for England where she has family who will take her in.   Then full scale gang warfare breaks out on the estate and Dheepan finds himself in a very foreign conflict zone.

Audiard is a great director of actors, and there are no weak links.  Srinivasan delivers a stellar, understated film debut as Yalini while the charismatic Anthonythasan Jesuthasan displays an incredible range of emotions, including humour.  Vincent Rottiers, who played the future filmmaker Jean Renoir in the biopic of his father, entitled Renoir, looks like a cross between American actors Dane DeHaan and Edward Norton. He manages to convey a sense of menace, pathos and warmth at the same time.

The problems begin about half way through the film when Audiard and his two co-writers introduce an unwanted subplot in the form of Colonel Cheran (Vasanth Selvam) a Tamil Colonel who has tracked down Sivadhasan, presumed dead.  Now he is intent on blackmailing Dheepan into sending weapons back to Sri Lanka. Audiard seems to have realised that this new story line is distracting because the Colonel instantly disappears.  What he is replaced with is also problematic.

As war breaks out on the estate, the parallels between the war-ravaged country Dheepan left and a Paris ghetto become too contrived.  A brief view of newfound happiness and a leafy English suburban street raises the question of why life is so much better in England, with another language to learn.  Is it the friendly, tolerate British, the benefits, a better choice of jobs, or simply Yalini’s established, generous family?