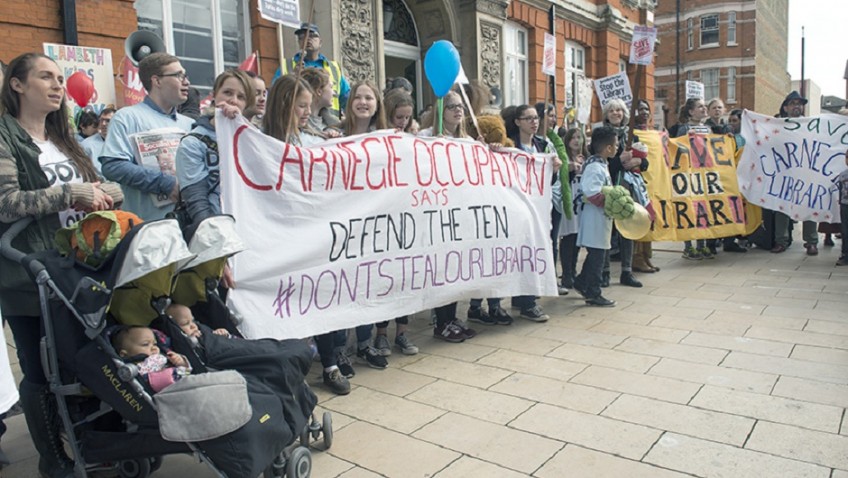 On Saturday, 9th April, the 10 day occupation of Carnegie Library in Herne Hill, South London ended with a 2,000 strong demonstration, the largest protest seen in Lambeth in years.

Also on Saturday, campaigners learned that the government is now to investigate Lambeth’s disastrous library plans.

The DCMS (Department for Culture, Media & Sport) has a legal duty to intervene if a council is failing to provide a ‘comprehensive and efficient’ library service (Public Libraries & Museums Act 1964). The DCMS is known to have been following events in Lambeth for some months. Now it is taking action, and asking for full information.

This new interest at the highest level is just one achievement of the occupation of Carnegie Library which ended on Saturday (9 April) after 10 days. It began on March 31, when local people refused to leave the library. Carnegie Library, along with nearby Minet Library due to close from April 1 for conversion in to fee-charging gyms with an unstaffed lounge. Two more Lambeth libraries (Waterloo and Upper Norwood) are due to close soon. These closures were vehemently opposed by local people whose lobbying, letter-writing and delegations were ignored by the Lambeth Council.

The occupation at the Grade 2 listed Carnegie Library gave Lambeth residents a new chance to demonstrate this opposition – and they eagerly took it up. Messages of support flooded in from all over the borough, along generous donations of food, blankets and toiletries. Hundreds of people came to the barred library doorway to say: “Thank you. You are doing this for us”. Visitors to the gate included Horrid Henry author Francesca Simon and local author Stella Duffy.

Coverage by the press was on a scale never before seen for a library protest, anywhere in the UK. As well as continuous reports throughout the week by all major radio and TV channels, the story was heavily featured in national papers including the Guardian, the i, the Times and the Financial Times.

The occupation ended after court proceedings for eviction by Lambeth Council, with a rally in front of the library with an emotional renditions of ‘Amazing Grace’ and ‘We Shall Overcome’ led by young occupiers. 2,000 people joined the march on Saturday that started at the Carnegie, passed the doomed Minet library and ended with a rally in Windrush Square in Brixton.

As they left the building on Saturday – greeted by hundreds of cheering people – the occupiers said: .“We are coming out today stronger than we went in, just as resolute and with much more support. By coming out today, we can march together. We may be leaving the library today, but our campaign continues.”

Nevertheless Lambeth’s Labour council is still refusing to change plans that have now been exposed nationwide as unworkable and wildly expensive.

The occupiers say:”Lambeth’s clumsy, combative handling of the occupation has been a PR disaster. People are incensed. It is now in a very deep hole, but seems unable to stop digging.”

This exposure of the council has given new focus – and hope – to groups in the borough fighting against high-handed decisions that are set to demolish social housing, privatise public assets and destroy local businesses and meeting places in favour of expensive flats for wealthy incomers. Protest is growing all over the borough, including within Labour party branches. The common issue is the council’s refusal to listen, and a bullying culture that aims to crush all dissent.

The investigation by the DCMS is adding to the mounting pressure on Lambeth Council. The library campaigners will fight on. As they left the building they said: “The world knows now that there is no future for the absurd plan for gyms in these libraries. We leave the library today with the intention that we will all be returning back through the doors; when Carnegie Library is reopened, Minet Library is reopened and the future of Waterloo and Upper Norwood libraries are secured.”

A public meeting has been called for Thursday 14th April.